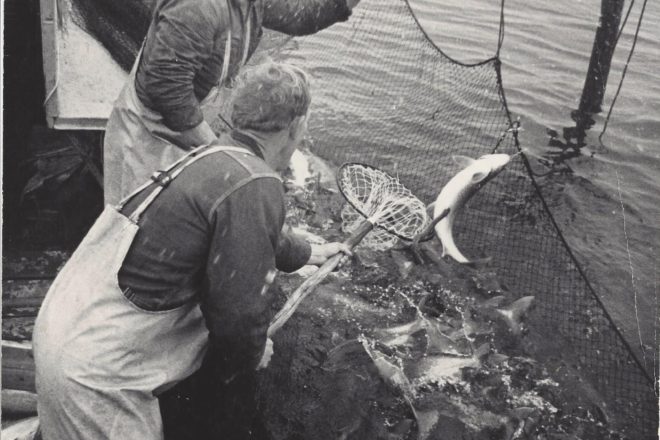 Dennis and Jeff Hickey bring in the catch. Submitted.

The largest crowd to attend a meeting of the Baileys Harbor Historical Society in several years recently heard an entertaining and educational presentation by Dennis Hickey about the history of commercial fishing in Door County.

Before there were roads – and certainly no bridges – connecting the peninsula with the mainland, boats carried everything: goods and people. A 106-foot, three-masted schooner could cover 15 knots per hour with a decent wind and, by sailing all night, could reach Chicago in a day and a half. Because there were no roads in any part of Door County during the late 1800s and no trail north of Sturgeon Bay, water travel was a necessity.

The largest dock for commercial schooners in Baileys Harbor was about 1,000 feet long, built by a man named Thomas Severn in 17 feet of water and heading southeast from the town harbor. It was an ideal direction, Hickey said, for catching the wind, unlike the current dock, which is not well positioned for sailboats. The big crypts that supported the dock are still visible behind the old McArdle house next door to the Nelson property.

Severn, one of the earliest settlers in the area, was an investor who bought, plotted and sold a lot of Baileys Harbor. He eventually sold the dock to S.B. Ward, who sold it to Moses Kilgore, who owned it for the longest time, along with a general store.

When Hickey’s grandfather, Martin Hickey, sold land to build the town hall, he moved the Kilgore house, built in 1860, to a site across from The Ridges Sanctuary. The Hickey family still owns it. Martin’s brother, Reinhardt, who lived nearby, enlisted in the Lifesaving Service and served at the Baileys Harbor Lifesaving Station. The land from the town hall north was the Hickey family farm.

Along with the huge Kilgore dock, Baileys Harbor had two or three small docks for commercial fishers. C.J. Winegar also had a commercial dock where the Baileys Harbor Yacht Club break wall is now. The first documented fishing company in Baileys Harbor was the Mud Bay Fish Company, which was established by a man named McDonald in 1854 and sold to Hans Bues and Adam Hendricks in 1865.

His son, William, continued in the business, and William’s sons, Dennis and Jeffrey, are the third generation of fishers in Baileys Harbor. They began working with Winegar, fishing alewives during the 1960s after duty in the U.S. Navy. Dennis’ daughter and son-in-law, Carin and Todd Stuth, joined the business after graduating from college in 2000.

Baileys Harbor was very important to trade schooners in those years because it rarely froze over in the winter, as other Lake Michigan harbors did. There were many wrecks – vessels that ran aground on the reef and sank – and traces of them are still visible.

Lake trout and whitefish were most commonly fished from Baileys Harbor in the early days. Most who fished for trout used hooks and took bait from a small pond north of town that was shared by all.

The trout were split, salted and packed in wooden barrels holding 100 pounds. Often 15 to 20 extra pounds were packed in each barrel in case of leakage, because if there was leakage, there was no payment when the barrel reached market. Lake trout brought four cents per pound, and deboned and split whitefish paid $1.50 a barrel.

In those days, pound nets were most commonly used. McDonald used them in 1854 when he started the Mud Bay Fish Company, and they could later be seen floating on the surface from Whitefish Bay in Milwaukee, all the way around the peninsula, and up the other side – 23 of them by Chambers Island alone. A large pound net was very stable in storms, courtesy of 18 100-pound anchors and anchor lines that were 300 to 400 feet long. The trap nets most commonly used now are set underwater, so they are not a problem to boat traffic.

Beverly Anclam, whose father, Alfred Anclam, fished from Anclam’s Dock, compiled a book of articles from early editions of the Door County Advocate that referred to schooners, boats and fishing. (It can be accessed in the Baileys Harbor Library.) From it, Hickey learned how many barrels local cooper A.G. Nelson produced in a year.

“On a recent Monday,” Hickey said, “the three Door County live entrapment fishermen could have filled all those barrels in just one day. Fish are primarily provided to local restaurants, with the remainder shipped to Chicago, New York and Canada, to name a few locations. In the last few years, there has been a tremendous demand for fresh, locally caught fish, driven by the increase in Door County tourism.”

The Baileys Harbor Fish Company, now in its fourth generation, is owned by Hickey’s daughter, Carin Hickey Stuth; and her husband, Todd. They hold four commercial fishing licenses and operate five boats in Lake Michigan and the bay of Green Bay. The retail fish store offers the whitefish and perch caught by their boats, along with a large variety of other fish and seafood. The company also smokes fish at its facility.

Processing has become a lot easier with fancier, labor-saving machinery for scaling, filleting and pin-boning.

Door County has only three live entrapment fisheries left. All commercial fisheries have quotas for the type and amount of fish they’re allowed to take in a year.

“Many people probably assume we keep all the fish we catch,” Hickey said. “Not true. We keep what we have orders for and return the rest to the lake. We save as much of our quota as we can for the fall because then we get yellow caviar from whitefish, considered a great delicacy in Scandinavian countries. We’ve exported it to Norway and Sweden for more than 50 years.”

For more than four decades, Hickey has represented Wisconsin’s commercial fisheries as the commercial adviser on the Great Lakes Fishery Commission.

The family also has been, and continues to be, heavily involved in ongoing research and activities to improve and maintain the quality of fishing. Working with various agencies, including the U.S. Fish & Wildlife Service, UW-Stevens Point and the Wisconsin Department of Natural Resources, they partner to protect the future of fish stocks. Since 2010, Todd Stuth has headed a research project at Yellowstone National Park that currently involves 30 Hickey Brothers Research employees and four boats built by former employees of Palmer Johnson.

Hickey’s assessment of local fishing? The perch population is in good shape. Walleyes, northerns and muskies are predator fish, and we have to keep an eye on their numbers so they don’t start eliminating perch and whitefish.

The Hickeys’ retail shop is located at 8096 Ridges Road in Baileys Harbor.