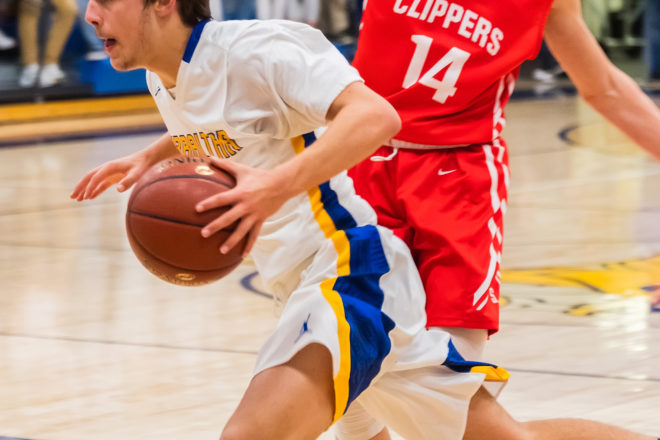 Luke Steebs, Dominic Krauel and Sam Lindenberg literally defeated Bowler in the opening round of the Division 5 boys playoffs Tuesday.

The trio combined for 81 points as the Vikings dominated the Panthers 97-67 and advanced to the regional semifinal Friday at home against Suring. Steebs led all scorers with 30 points, Krauel added 27 and Lindenberg chipped in 24.

“I can’t remember ever having 3 players combine for that many points,” Gibraltar coach Justin Burress said. “All three have been pretty consistent scorers throughout the year, but it may have been career-high nights for two of the three.”

“They have more balanced scoring than our previous opponent – no single threat that will take over the game,” Burress said. “We need to be much more disciplined with our defense Friday. I think we match up quite well with them, it should be another fast-paced, fun game.”

Gunnar Tebon paced Sturgeon Bay with 24 points, and Jake Schneider and Adison Benzinger added 18 and 9, respectively. The Clippers – who finished second in the Packerland Conference standings – led 31-30 at halftime but pulled away behind 24 combined points from Tebon and Schneider in the second half.

“I knew that they were better than their record indicated,” Sturgeon Bay coach Jim Benesh said. “We played them in the beginning of the season scrimmage and their inside game hurt us. They were a good team.”.

Chilton, which placed third in the Eastern Wisconsin Conference behind Roncalli and Sheboygan Falls, enters the game at 17-5. Ryan Broekel, Wil Kapral and Camden Bowe combine to average 43.3 points per game.

“We are still finalizing our plans for Chilton,” Benesh said. “They are an experienced team with a group of seniors that have played varsity together for a few years. They have good balance.”

Southern Door has been off since defeating Kewaunee 53-48 on Feb. 27 to clinch a tie for the Packerland title with the Storm. Cedar Grove-Belgium defeated Algoma 86-47 in opening round play. The Eagles defeated Algoma by an average of 34 points in two regular season wins.

“I think the experience we gained from last week’s game against Kewaunee will be very beneficial for us moving forward into tournament play,” Southern Door coach Pete Claflin said.  “It was a tournament atmosphere and every possession was important just like it will be in the tournament. Also, we now have the confidence that we can beat an excellent team on the road.”

“Cedar Grove-Belgium is an excellent team that plays in a great conference,” Claflin said. “They start five seniors and are very athletic.  They present a lot of match up problems for us with their quickness and athleticism. It will be a tough game. We will have to play a great game to win.”

The Sevastopol Pioneers lost to Howards Grove, 55-48, in the first round of the Division 4 playoffs to end their season. It was the final game for the school’s all-time scoring leader, Robby Pollman, who this season became the first Pioneer boy to top 1,000 points.