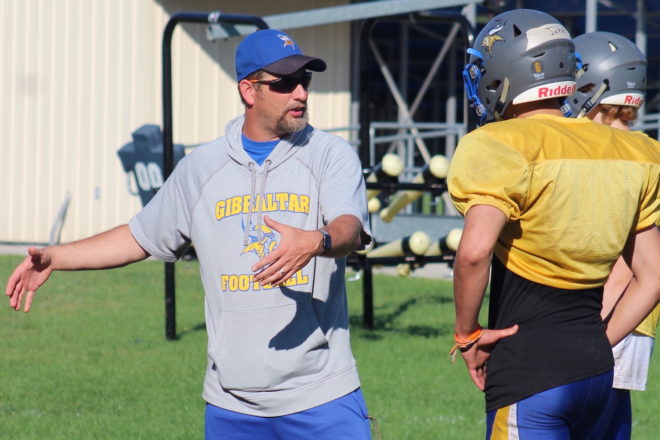 Gone is what was called the Marinette & Oconto, Northern Lakes and Packerland Conference 8 East Division with the debut of the Peninsula Conference for eight-player football. Many of the teams in the new, eight-team league are the same ones the Vikings faced last season, with Gibraltar still playing against Sevastopol, Algoma, Gillett, Lena/St. Thomas Aquinas and Oneida Nation/NEW Lutheran. Suring and Wausaukee will also be among the Vikings’ conference opponents.

“As long as we, as coaches, can put these kids in a successful position, I think you’re going to see great things out of this Gibraltar football team,” said Vikings head coach Mike Peck.

Peck said the team’s varsity roster of just under 25 players includes 11 seniors, 10 of whom were on the team last season.

“Our goal every year is to be competitive in every game, and then you’ve got to let the chips fall wherever they do,” he said. “Obviously, our seniors [are] pretty experienced. They put in a lot of work in the offseason. They have some high goals, but we’re going to take baby steps.”

Peck, who has been with Gibraltar’s football program for five years, said some of the smaller goals include winning against teams the Vikings haven’t defeated in recent years.

“Our seniors haven’t beat Algoma since they’ve been [football players], so we’d like to beat Algoma,” he said. “Then, obviously, they think they’re going to be competitive, so if you talked to my kids, they’d tell you they definitely want a conference title, especially in the first year as the Peninsula Conference.”

After winning three of five conference games and going 5-3 overall last season, the Vikings narrowly missed the playoffs and have a goal to get there this season. They’ll try to do it with many returning players, but without last year’s Offensive Player of the Year in quarterback Sam Lindenberg, who graduated.

Though the Vikings will no longer have Lindenberg behind center, Peck said the team will continue to spread out on offense.

“We’re going to put our playmakers in space,” he said. “Hopefully they can make one guy miss, and we can get lots of yards that way.”

On defense, Peck said Gibraltar will primarily use four players on the front line.

“I think we’re going to try to add some more wrinkles this year [on defense],” he said. “I think our kids are really sound in our base defense, and now they’re ready to amp up the level.”

With players seeing time on both offense and defense, Peck said he expects 10-12 players primarily to see action during a game, unless it becomes one-sided, when all the players will get on the field.

“If we’re in a ball game, there’s some things that we started to do last year where we were trying to find positions where we might have one or two extra guys that were very capable replacements, and then they fill in the whole game, so our kids could get one out of every four series off,” he said. “I think you’ll see a little bit more of that again, especially on the defense this year. I think we did a little of that rotating last year on offense, but it’s just a way to keep some of our kids fresh.”

All games are played at 7 pm unless noted.

Sept. 30 Away vs. Lena/St. Thomas Academy

Oct. 14 Away vs. Sevastopol