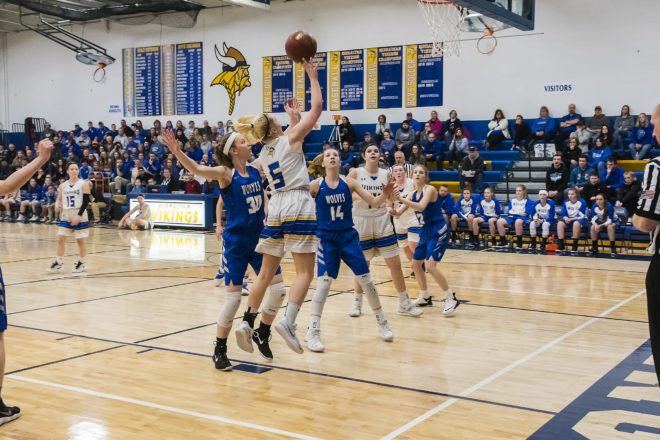 Abby Sitte returns to Gibraltar this season after scoring 10 points, dishing out 5.1 assists and grabbing 5.2 rebounds a year ago. Photo by Len Villano.

The Clippers – 3-20 overall and 3-13 in the Packerland Conference last season – will rely on a trio of returnees to pace their offense.

“We are going to lean on them to get the team going each game because shooting is contagious, and when the team sees the ball go in early, it becomes easier to shoot and score,” Coach Erik Tauschek said. “We will have sets for them to get looks, and we will expect them to be able to create their own look and create looks for other players on the team. If we want to be a scary team, we are going to need whoever is on the floor to be a threat.”

“We are excited to start the season, and we have high hopes for the team,” Tauschek said. “I believe this is going to be a great year because of the work the girls have put in throughout the summer, and they have a different attitude this year than other years. The girls are ready to take the next step.”

First-year coach Devin Thomas, who replaces long-time coach Josh Kropuenske, says that the Vikings will need to find scorers to offset the loss of Patyon Pluff, who graduated as Gibraltar’s all-time leading scorer.

“Losing Payton Pluff to graduation is obviously a huge loss,” Thomas said. “She was a terrific player for a long time, and her accolades proved that. We are going to need to find scoring from different players.”

Thomas says he will rely on Abbi Sitte, Sage Krause and Sophia Alexander to produce the Vikings’ points this season. Karlee Kita, who was set to return after scoring 8.5 points per game last year, will likely miss most of the season.

Sitte returns after scoring 10 points, dishing out 5.1 assists and grabbing 5.2 rebounds a year ago. Krause chipped in 5.6 points per game. Thomas also is counting on senior Nina Sitte and juniors Barret Chomeau, Eliza Maltby, Maggie Moroney and Audrey Viste to pick up the scoring slack.

“Abbi has had a tremendous career up to this point. She has the capability to do anything on the court, and for the past three years has done a great job facilitating the offense, getting everyone involved and playing some great defense,” Thomas said. “This year I expect her to continue to do those things, but I also want her to look for her shot more and call her own number more often than she has in the past.”

Thomas says he is excited to start his first campaign as head coach.

“I think that anytime you step into a new position, there are nerves. Add the fact that Coach K was a great coach, mentor and friend, and you have some big shoes to fill, figuratively and literally,” Thomas said. “I am already feeling the butterflies, and we haven’t even started practice yet, but I consider it a good thing. I think that will help me lock in my focus to the job at hand, which is to help the young women [who] are a part of this team to reach their potential on and off the court.”

The Pioneers return a limited number of players with varsity experience from a team that finished 5-18 last season.

Zoe Kuehn, who was second-team All-Packerland Conference last year, returns after scoring 16 points and grabbing 9.9 rebounds per game last season. Grace Brauer – 5.7 ppg and 5.3 rpg – will miss the season due to injury.

First-year coach Ben Rikkola says he will rely on Lauren Junion, Chilina Cuellar, Madi Ploor, Abby Hocevar and McKenzie Wiesner to add scoring for the Pioneers. Karoline Jordan, a transfer from Washington Island, has joined the team this year.

“Our varsity experience is very limited,” Rikkola admitted. “We have a lot of points per game to find in scoring, so we are taking the approach of an opportunity for people to step up. Whether it is returners, newcomers or freshmen, the door is open for people to emerge as major contributors. I have no idea at this point who they will be.”

Despite the lack of experienced returnees, Rikkola is excited about the season.

“This will be [the] most difficult coaching assignment I’ve ever had, but I’m a basketball junkie, so I’m excited to be in the gym teaching players the skills and discipline it takes to be successful,” Rikkola said. “But it’s going to take time to establish successful habits.

“My decision to return was fueled by wanting to continue to build the girls program here at Southern Door,” Shimon said.

The Eagles lost Grace LeGrave and Tehya Bertrand to graduation, but they return a trio of scorers from last year’s 14-9 team. Nicole Norton returns after scoring 9.3 points per game, along with Hailey Shimon (8.9 ppg) and Kendra Dantoin (7.0 ppg). Shimon and Dantoin are the top rebounders returning at 6.9 rpg and 6.0 rpg, respectively.

“We have seven girls coming back this year [who] have played significant minutes at the varsity level last year,” Shimon said. “I believe Nicole Norton is set to have a breakout year. Our coaching staff is looking to have a successful year developing our young talent alongside our upperclassmen.”