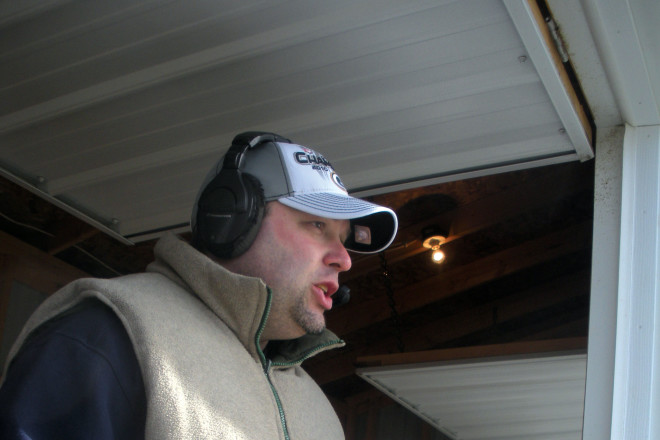 Few people have seen as many Door County high school sports competitions over the last 20 years as Chad Michaels. As the play-by-play man for 93.9 WDOR radio in Sturgeon Bay, he chronicles the exploits of the county’s football, basketball, baseball, and softball players for those across the peninsula who can’t make it to the game. 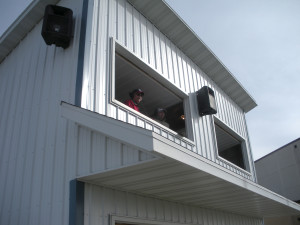 He came here from Minneapolis after earning his associate’s degree in radio and television broadcasting. He expected to spend only a year in the county, but he has been here two decades as of this April.

I caught up with Michaels at his desk in WDOR’s non-descript offices, tucked away on Utah Street in Sturgeon Bay, to get his reflections on 20 years of Door County high school sports.

You might catch more Door County high school games than anyone – how many games do you call each year?

I would say I do about 75 each year in baseball, football, girls and boys basketball, and softball.

That works out to about 1,500 games over 20 years, which were the most memorable?

The Sturgeon Bay vs. New Holstein [boys basketball] sectional semi-final in 2000 stands out. It was tied late and Brandon Hansen hit a three to put Sturgeon Bay ahead really late in the game. That’s kind of like a mini-state in the sectional semis at the Brown County Arena with 8,000 to 10,000 people there.

There’s the [basketball] game Nick Greisen had 46 points for Sturgeon Bay against Algoma. But the tournament games are the ones you remember most because there’s so much at stake. Southern Door beat Cambridge in the 1999 sectional final at the buzzer on a Travis LeRoy rebound and turnaround, fade-away shot at the buzzer that maybe shouldn’t have counted.

Which is your favorite sport to cover?

How do you decide which games to cover?

We try to cover everybody, and we like to do games with two Door County teams [the Packerland Conference includes four Door County schools:  Southern Door, Sturgeon Bay, Sevastopol, and Gibraltar].

At times, the disparity in enrollments in the Packerland can create some competitive mismatches, how do you handle those games in a community so small?

Sometimes you have to think of it as a listener. If I were driving around or sitting at home, would I want to listen to a blowout?

Plus, I’m a parent, too, and you don’t want to embarrass the kids – but you have to tell the truth at the same time. You try to find a way to say it without ripping on the player, so you might say something like, “I’m sure if you asked him he’d tell you that wasn’t a good play.”

What’s the biggest change you’ve noticed in your 20 years going to gymnasiums and ball fields?

I don’t think as many people go to games as they used to. I don’t mean it as anything other than what you see, but I don’t think any of the schools have cheerleaders. If you have anyone leading a cheer it’s usually one of the students. You wonder if there are just that many more things to do or if it’s just not as important to people anymore.

What’s the best part of your job?

Beyond the games, it’s the people. Pretty much all of the people I know and the friends I’ve made are through sports. You get to know kids and their parents as they come through. I’ve built a lot of relationships and friendships because of it.

You have to take the kids who went on to play for the Wisconsin Badgers in football:  Southern Door’s Al Johnson and Ben Johnson, then Sturgeon Bay’s Nick Greisen and Casey Rabach. Nick’s older brother Chris Greisen was really good at three sports [football, basketball, and baseball]. On the girls’ side, Sara Junion of Sevastopol was tough as nails. She might be the best female athlete I’ve seen up here.

Well, you have to say the 2004 Sturgeon Bay football team, because they won state, but the 1998 Southern Door boys basketball team that lost in sectionals was incredible. I think they were actually better than Southern Door’s 1999 team that went to state. In 1998 they had so much size with Al Johnson, speed with Tory Miller, and shooting with Nathan Vogel.

Southern Door’s old gym was great, and people used to say Sturgeon Bay, but that may have been more about the lighting they used to have. But probably the most intimidating place is Sevastopol. It seems like the court is smaller, like the fans are right on top of you, and there’s only the five or six rows of bleachers there. At Gibraltar, their pep band was awesome the last few years, and that just adds to the atmosphere and excitement.

But it’s not as raucous as it used to be. Kids aren’t allowed to chant like they used to.

Do you have another 20 years in you?

As long as I can see the field, as long as I enjoy it, I’ll probably still do it. It sure is fun. We try to have fun, and I hope that comes across on the air.