Tea Thyme in Sister Bay, offers tea, of course, as well as an array of tea-related products. Photo by Len Villano.

Life today is busy, perhaps busier than it ever has been, and quite frankly, we often work too hard trying to keep up with it. Despite all our modern conveniences, we are in desperate need of an advantage which many previous generations cherished most – leisure. A chance for serenity instead of the usual stress, for celebration of all we have received instead of the usual striving to receive more, leisure can consist in the simplest activities. One such activity, according to the British novelist George Gissing, is the ‘festival’ of afternoon tea. “The mere chink of cups and saucers,” he proclaims in adoration, “turns the mind to happy repose.”

Fellow tea enthusiasts Lynn Church and Karen McCarthy opened the doors of their Country Walk shop in Sister Bay last July, and one only has to walk through them to understand the ‘happy repose’ to which Gissing refers. With its delicately painted china and hand-knitted tea cozies, glass jars of honey and attractively wrapped cookies, Tea Thyme presents a refined feast for the senses. But of course Church and McCarthy knew that as aesthetically pleasing as all these tea accessories were, the tea itself was the crowning jewel, so they created a ‘Sensation Station’ where customers could look at, smell, and even touch small amounts of their high-quality loose teas. There is the kaleidoscopic Chinese Flower tea, composed of colorful petals, and the rather comical Genmaicha tea, scattered with bits of popped rice; there are wonderfully fragrant teas such as Peach and Peppermint, and Pu-erh tea, which smells suspiciously like goldfish flakes – but reportedly helps you lose weight. 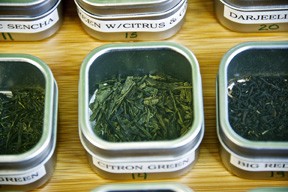 The shop is stocked with an array of British goods, thanks to the Englishwoman behind the desk. Though Church is a born Midwestern, her partner, McCarthy, hails from Reading, just west of London. “Thus always drank tea,” she laughs, “with milk! Because the British always drink tea with milk.” (According to McCarthy, if you pour milk in before the tea, your cup won’t be stained!) Fortunately for us, she moved to the U.S. in 1986, and now daily instills her very stereotypically English appreciation for tea in us Yankees.

In my conversation with McCarthy, I learned a bit about how tea came to be so vital to the English people. It was discovered in the Himalayan foothills, modern day China and India. The Portuguese and Dutch were the first to bring it to Europe in the 17th century, and though it had become popular among the British aristocracy in the 18th because of the Dutch-raised King Charles II and his Portuguese wife, “it wasn’t until the 19th century that tea became indispensable to the British economy.” (So we read in one of the shop’s books). Around this time, Anna the Duchess of Bedford, a friend of Queen Victoria, began having an afternoon tea with treats to tide herself over during the long wait between lunch and the customary late dinners.

Afternoon tea is what people today colloquially call high tea when done with a little extra pomp. McCarthy says some of her favorite childhood memories were of her family’s Sunday variation. “You’d either have your grandparents or uncles and aunts over for Sunday dinner,” which on that day was at the usual lunch hour, and then later on “you’d have afternoon tea,” with finger sandwiches, desserts, and other tidbits.

McCarthy also reveals to me her favorite teatime treat – “a scone with clotted cream.” She and Church hope to someday move their shop to a location where they could serve high tea throughout the afternoon. “It’s not going to go down in a place where people are busy busy, working working, but because people are here and have got time to kill,” McCarthy figures, such an addition might be well received. Currently, the two women sell cups of all their loose teas, which customers can sip while they sit outside on the veranda. 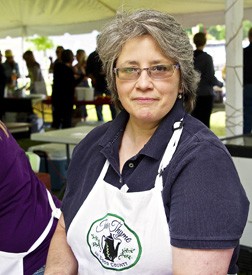 But though they reserve these high tea times for the afternoon, the British drink tea all day long. It seems to be the proper response to nearly any situation life can throw at a person: “when you have workmen round the house,” McCarthy informs me, you offer them tea; when, apparently, you have a newspaper intern asking questions in your shop, you offer her tea. McCarthy tells me how her uncle once lost a couple toes while mowing the lawn – “my auntie gave him a cup o’ tea, because, you always have a cup o’ tea! It’s always the answer.” William Gladstone, a British statesman and prime minister in the 1800s, rhetorized about these diverse, at times seemingly opposite benefits of the drink: “If you are cold, tea will warm you; if you are too heated, it will cool you; if you are depressed, it will cheer you; if you are excited, it will calm you.” “It does!” McCarthy agrees, “Even in the heat of summer, you still have a hot cup of tea…it makes you feel better even though you wouldn’t think it would.”

Different types of tea can also be employed for specific medical purposes, and McCarthy says that shoppers often come in seeking aid for one ailment or another. Ginger soothes an upset stomach, while Chamomile and Lavender ease one to sleep; herbal blends with turmeric provide relief for arthritis, and Tea Thyme’s most popular tea, Cinnamon Spice, clears sinus congestion and lowers blood pressure.

Yet all the reasons and ways that people have for drinking tea aim at the same end – peace. And peace of mind, body, and soul is precisely what we seek in our few quiet moments during a busy day or our weeklong vacation to Door County during our busy year. Such rests are not mere breaks from work, enabling us to labor more efficiently when they are over; they are what we work for. These times of leisure, what we do with the freedom we earn and the gifts we are given, define our lives. Most people probably feel they don’t have much opportunity to be at leisure and nurture peace in their life, but there is one easy way to start – go on, “have a cup o’ tea!”

Erin Monfils is a rising senior at a tiny, Catholic liberal arts college in southern New Hampshire. Born and raised in Minnesota, but fortunately by two Wisconsin natives, she has long considered Door County a permanent home away from home. This summer, she is staying with her grandparents on the hilltop north of Sister Bay while she works as the Arts and Entertainment intern here at the Pulse.