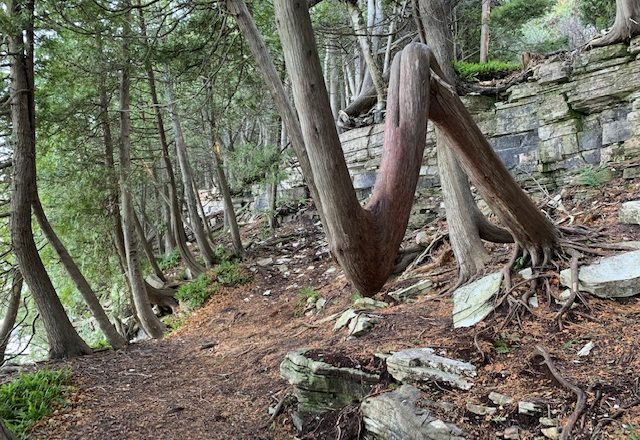 Near the northernmost reaches of the peninsula, one of Door County’s most underrated natural areas conceals its secret vistas from most visitors. Door Bluff Headlands County Park stands largely undisturbed, beckoning adventurers to get to know this hidden gem.

Aside from an access road to the interior of the park, Door Bluff Headlands County Park is almost entirely undeveloped. There are no bathrooms, grills or facilities here – just wilderness, towering bluffs and 6,800 feet of Green Bay shoreline.

Don’t expect to find anything in the way of trail guidance. There are no signs – just a path to follow south from the end of the access road that will take you on some moderate climbs through the woods until it unveils a spectacular view of Green Bay. If you choose to take the path to the north (and we use the word “path” loosely), expect a more difficult journey. The trail is not marked or developed, so it can be hard to follow with steep rock outcroppings. It is beautiful, however, with cedars fighting valiantly to claim a foothold in the bluff and waves rolling into the cliff below.

Door Bluff Headlands at a Glance

Distance: Roughly 2.5 miles
Time: 1-2 hours
Difficulty: Hard (in winter). The trail is not cleared, and many areas can be icy and slick. Hike with extreme caution at any time of year.
Key feature: The lookout from atop the bluff provides a beautiful, panoramic view of the ice-covered bay.
Backstory: Legend has it that Door Bluff Headlands are where the Washington Island Indians, the Potawatomi, fought the mainland Indians, the Winnebago. In the midst of the battle, the weather turned, and the rough waters and ensuing battle claimed hundreds of warriors, giving rise to the name Porte des Morts, or Death’s Door.
If you go: Wear good hiking boots and crampons for grip, and use a walking stick. Trails aren’t marked, so a map or cell phone is recommended as well.