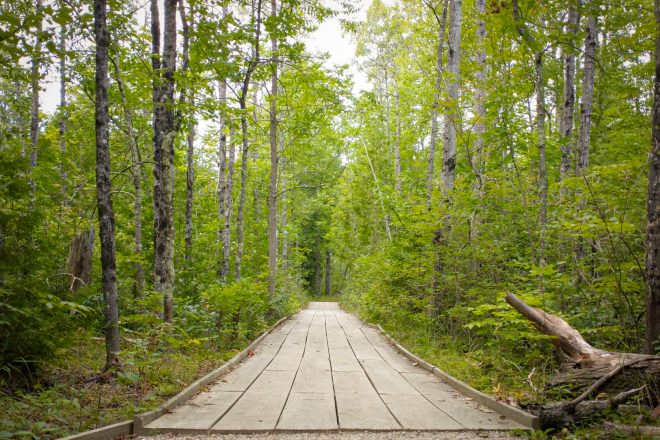 As the trees become taller and more dense, a few wide boardwalks beckon the hiker farther into the forest. Photo by Jessica Gatzow.

The Lynd Point Fern Loop is the quintessential Newport State Park experience, with its gigantic trees, frequent terrain variations, ecological niches and rarely another trail-goer in sight. Although it doesn’t literally cover every corner of the park – something that the seven-mile Europe Bay Loop nearly achieves – the trail does serve as a condensed sample of what Newport has to offer, and it overlaps with two sections of the Europe Bay Loop near the center of the park.

Deciding to save the water views for the latter portion of my hike, I hopped on the Fern Trail from parking lot 3. It didn’t take long for the forest to envelop me in the quiet grandeur of old-growth trees, keeping my gaze wandering upward. Perhaps my eyes were playing tricks on me, but at times, it seemed like the trees there stood significantly taller than what’s typical in the state.

I perceived the scent of evergreens change as the forest composition transitioned from one dominating conifer to another. Fern species, too, seemed to alternate in predominance. At one point, the trail cut through large stone formations where miniature, rock-dwelling ferns poked out of the sides and crowned the tops of the boulders.

The Fern Trail features much of the park’s beautifully illustrated educational signage, each marker providing a supplement to the hiker’s observational experience by describing facets such as the state park’s history, forest layers and various fern habitats.

As the Fern Trail transitioned into Lynd Point, the trail began to parallel the shoreline, which possessed just as much variation as the hiking-path terrain: flat, walkable rocks akin to those at Cave Point County Park; water sloshing between jagged boulders; and beaches of sand, pebble and shell mixtures. The shoreline-hugging trail takes you along both Lake Michigan and Newport Bay.

The trek felt longer to me than its 2.5 miles because something continually piqued my curiosity or drew my attention and made me slow my pace: inchworms dangling from trees by their nearly invisible threads (I noticed five cross my path), the microhabitat of ostrich ferns and so much more. And once you approach the water, it’s difficult not to step off the trail at every opening to enjoy a new vista.

The Lynd Point Trail ends (or begins, depending on your hiking route) by intersecting with the Europe Bay Loop, which deposits you at the beach of Newport Bay, just a short walk back to the parking lot.

Difficulty: Moderate. You’ll need to step through some mazes of tree roots and large rocks and hike the occasional steep incline.