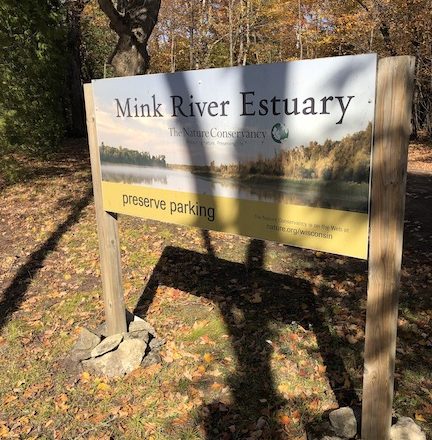 I recently wrote about a hike – the Schoenbrunn Trail – on the northern side of the estuary. This week, I’m highlighting the trails south of the estuary, which are accessible by two trailheads on Mink River Road in Ellison Bay.

This is a hiking area I had never visited before. The trailheads are rather inconspicuous, and I assumed (incorrectly) that any hiking within the natural area began at the trailhead I was familiar with – the one on the County NP bend. Of course, I’m happy that I discovered these trails, and especially at the time when I did.

There are two trail sections that begin on Mink River Road: Fern Trail and Maple Ridge Trail. They connect to form a third section of trail that approaches the Mink River Estuary. I decided to try the Fern Trail, which was a mile long, including the approach to the estuary. I was lucky enough to go during peak fall color and was rewarded by sections of trail that were beautifully golden and almost otherworldly.

The section that most impressed me was one I came upon a bit by accident. There’s a curve to the right on the trail that takes hikers toward the Mink River Estuary, and at first I continued straight. That path turns into a snowmobile trail. It was serendipitous, though, because it took me into a grove of seemingly endless maple trees. The tall trees were lit up yellow at the top, and there was relatively little underbrush, giving the area a distinctly different feeling than other sections of the forest.

I tried my best to capture the scene, but photos just didn’t do it justice. You can still see this section of the forest on the trail, but you’re less surrounded by it. And, even though the peak color has passed, it’s still worth experiencing, no matter the season.

Continuing toward the estuary, the trail turned soggy and impassable without waterproof boots, so that final piece was a bit anticlimactic. I was hoping to get a view of the estuary – as the northern trail section offers – but instead, I found a swampy site and saw a swampy sight.

I have yet to hike the Maple Ridge section of the trail, but I’m eager to visit it soon.