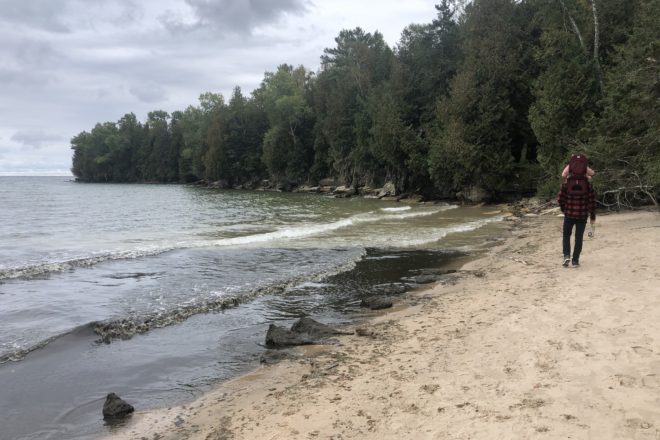 If you’re seeking a trail that takes you snugly along the shoreline, then the section of trail along Sand Cove and Duck Bay within Newport State Park will do nicely. Photo by Aleah Kidd.

If you’re seeking a trail that takes you snugly along the shoreline, then the section of trail along Sand Cove and Duck Bay within Newport State Park will do nicely. Its single-track path winds among roots, trees and rocks to give you glimpses of wide-open Lake Michigan on the lake side. Every so often, the trail also connects to a sandy section of beach where you can pause and reflect.

Although we’re now past swimming season, this hike is well worth the effort to enjoy the views of waves and rocky outcrops of the northernmost portion of the peninsula. Just be sure to dress for cool weather and windy conditions.

Newport State Park is known for its seclusion compared to other parks, and you’ll notice that there is certainly less foot traffic – especially at this time of year. It’s also been designated an International Dark Sky Park, thanks to its distance from light sources that prevent the night sky from being observed clearly.

As you go, look for interesting driftwood that’s washed ashore from the larger lake, and marvel at the water-carved, rocky ledges that have withstood the pounding waves for hundreds of years. Like many areas along the lake side of the peninsula, this land is exposed to harsh winds and waves year-round, which is why some of the tallest trees you see are absolutely massive: They’ve needed to be strong to stand up to the elements through the years and cycles of seasons.

If you’re up for extending your hike into an overnight adventure, try one of the rustic, hike-in campsites located nearby. Otherwise, you can rejoin the Newport trail and continue south to more inland trail sections or head back north to return to your starting point. The entire park boasts more than 30 miles of trails and 11 miles of shoreline, so there’s no shortage of options.