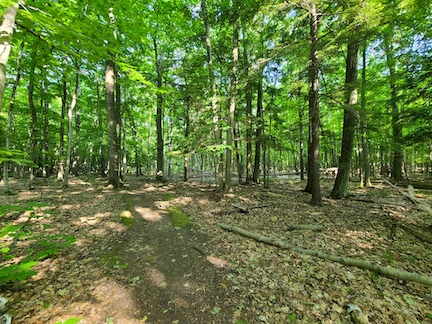 Large, mature oak, beech and maple trees tower above the path as it twists and turns through the forest, at one point passing by an interpretive sign highlighting the trail’s namesake: a lone pine that now rests on the forest floor. Photo by Sara Rae Lancaster.

Last month, I wrote about the Minnehaha Trail in Peninsula State Park. It’s no secret of a trail, with its western terminus located inside the popular Nicolet Bay campground and a route that wraps along the shoreline before connecting with the Eagle Trail at its eastern terminus. But what might not be as well known is the trail’s surprisingly ideal terrain for beginning backpackers and hikers who want to break in their gear over a manageable distance.

That led me on a search for other secondary uses of the familiar trails within the park, and I found the Lone Pine Trail. You can pick it up from the western terminus of the Minnehaha Trail, traveling a short distance through the campground before meeting up with the trail again just before it crosses Shore Road. It is also accessible from the Connector Trail between the Nicolet Bay Trail and the Lone Pine Trail’s southern terminus.

What the Lone Pine Trail lacks in distance – at only a half mile long – it makes up for in versatility and diversity. For the purposes of hiking, it offers what might be considered the “next level” for hikers and backpackers who have adjusted to the feel and weight of their gear but want continued practice climbing hills with trekking poles, negotiating different types of terrain, or increasing their endurance.

From the Minnehaha Trail and after the Shore Road crossing, the Lone Pine Trail quickly ascends the first of two switchbacks: a rather steep, craggy switchback and a series of rocky steps.

If you’re hiking with trekking poles, you’ll want to do a quick form check, making sure you’re keeping your arms bent at the elbows and your forearms parallel with the ground. To do that, shorten the height of your poles to maintain proper form. This will give you more leverage as you climb. If you’re hiking downhill, lengthen your poles to maintain good form and leverage. On particularly steep or rocky terrain, set your poles where you want to step next, dig in and use them to boost yourself to the next step.

The rocky steps up the Lone Pine Trail also afford an opportunity to experiment with your gait to find what reduces muscle strain. Your build and the weight distribution of your pack also play into what works best for you, but as you climb, think about what lessens muscle tension as you try shortening or lengthening your stride. You might also consider undoing or loosening the hip and sternum straps on your pack to allow for deeper breaths.

Although the steps and first switchback aren’t necessarily challenging in distance, the incline and weight of your pack do get the heart and lungs pumping. For those who are up to the challenge, this section is also ideal for repetition if your goal is to build endurance.

Once you’re at the top of the stairs, the incline continues along a less rocky switchback, followed by a gradual incline to where the trail crosses Skyline Road. From there, the trail narrows a bit before opening to a wide, mostly flat pathway surrounded by tall, mature trees – a mix of beech, maple and oak. Along the way, interpretive signs highlight points of interest, including the trail’s namesake: the lone pine that once stood among its deciduous neighbors.

Enjoy the twists and turns along this more easily traveled stretch, which at this point is really just a spur off Sentinel Trail and the Connector Trail to Nicolet Bay Trail. Nonetheless, it’s a welcome reward for your previous climb.

Difficulty: Moderate, including a rocky switchback that connects the segment of the trail between Shore Road and Skyline Road.

Highlights: Ideal for hikers who want to increase their endurance and practice their climbing technique. For those seeking less of a challenge, the portion of the trail that intersects Sentinel Trail offers a mostly flat, but winding stretch through a dense forest of mature trees.