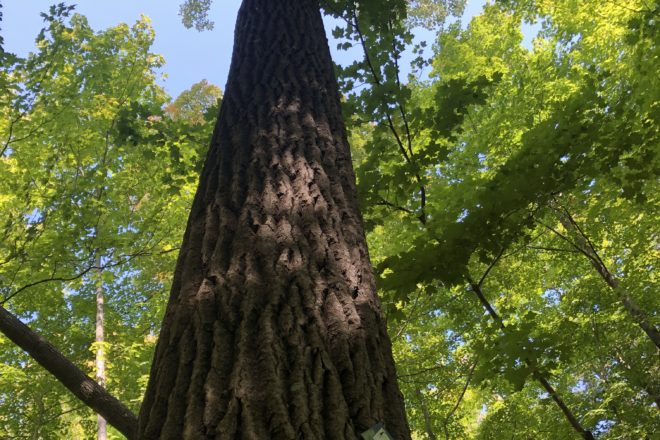 Hiking into the White Cliff Nature Preserve near Egg Harbor, you get the sense that the trees have been growing there for centuries – and you wouldn’t be wrong. Photo by Aleah Kidd.

Hiking into the White Cliff Nature Preserve near Egg Harbor, you get the sense that the trees have been growing there for centuries – and you wouldn’t be wrong. This preserve was once part of the acreage owned by Ferdinand Hotz, a wealthy jeweler from Chicago who owned more land than any other landowner in Door County during the 1900s – and it looks much the same as it did when he first traversed the area. The Door County Land Trust designated the land a State Natural Area in 2002, preserving 105 acres, including its 30-acre fen.

What is a fen? Simply put, it’s a rarer form of a swamp. Or, according to the U.S. Department of Agriculture, it’s a peat-forming wetland that relies on groundwater input, requires thousands of years to develop and cannot easily be restored once destroyed. The White Cliff Nature Preserve’s fen is among its distinctive parts, but one that was underappreciated for many years.

Fens are unusual in that, instead of being fed by rainfall or snowmelt, they’re fed by springs or seeps that bring alkaline and sometimes calcium-rich groundwater to the surface. Because of this, they’re also “hotspots of biodiversity” that host rare plants, insects and small mammals. Indeed, the Door Land Trust lists swamp milkweed, common bog grass, yellow lady’s slipper, marsh marigold, small-flowered gerardia, Kalm’s lobelia, swamp goldenrod and northern bog aster as being among the area’s uncommon plants.

The hiking trail has two loops that amount to one and a half miles in length, neither of which – understandably – goes through the fen. Thus, the hiking takes place on relatively flat ground within a mature forest that boasts many gigantic trees – both in width and height. Because of the forest’s maturity, the understory is also quite open and diverse. Look for spring ephemeral wildflowers, rare land snails and dragonflies.