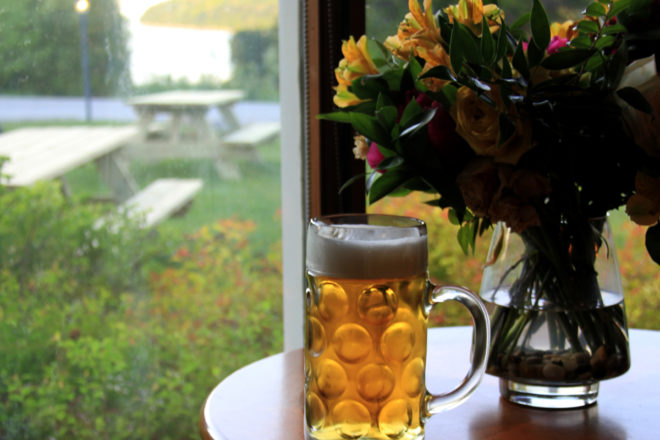 The classic dining space at Ellison Bay’s Hillside Inn has been newly christened Hügel Haus, a German pub and eatery. Stroll through the front doors, and you’ll find a tall, double-sided stone fireplace; high, beamed ceilings; and wood-paneled walls that have been part of the setting for decades, but they seem quite fitting for a German-style restaurant.

“Hügel” means “hill” in German, which ties the location and namesake, Hillside, into the name. Owners Dave Kurth, Linden Ray and Kevin Lawell saw the space come available and began brainstorming ideas about what type of restaurant would work well. Dave, an experienced chef, had previously offered German-fare specials at Mink River Basin that were very well received, which spurred the idea.

“Linden, Dave and I were brainstorming ideas for a new business late one night when Dave said, ‘Duh, how about a German restaurant?’” Lawell said. “He grew up going to German restaurants and learned to cook a lot of the things from his grandma and in his family’s restaurant growing up.”

Once the idea of German cuisine bubbled up, it took hold quickly, and the crew went to work creating a menu, beer list and branding to match. The black, red and yellow logo is a play on the Kurth family crest, and you’ll see elements of a German bier hall around the restaurant: intricate, lidded steins on the fireplace mantel; subtle string lighting; and a flag of the crest hung on the wall. The circular island bar, too, has been stocked with heavy glass steins, and new taps with German names have been added. The current pours include Hacker-Pschorr Weiss, Weihenstephan, Erdinger Weissbeer, Spaten Optimator and the crowd favorite thus far, Ayinger Celebrator Doppelbock.

The robust menu brims with authentic German plates, including a variety of schnitzel and wurst options; beef rouladen (a family recipe) and stroganoff; and an Emmenthaler-laden Käsespätzle.

For starters, I went with the wurst sampler: a selection of weisswurst, knockwurst and bratwurst served with stone-ground mustard, horseradish and dijon. Each had a distinct flavor, and it was an adventure for the tastebuds to try the different wursts with each condiment. All meat, including the sausage and wursts, are sourced locally from Door County Custom Meats in Sturgeon Bay and Otto’s Meats in Luxemburg.

For my entrée, I enjoyed a tender Hühnerschnitel: a thin, breaded chicken breast with spaetzle, red cabbage, honey-herb sauerkraut and hunter’s gravy. It was a supremely savory (and a little sour) blend of flavors that was easy to devour. After the appetizer, the portion was enough to take a bit home for a late-night snack. Diners can also look for the daily entrée special, which is a fish fry on Friday. (And, yes, the full bar still serves excellent Old Fashioneds.)

The dessert list was very tempting, and doubly so when I learned that it wasn’t available yet on preview night. Sourced from Fish Creek’s FIKA Bakery, the list included a German chocolate cake and Black Forest cake. In lieu of the sweet, I ended the meal with a shot of Underburg bitters – a supposed digestif – served in a tall, stemmed glass. “The Underberg idea came from the county’s love for bitters, so naturally I felt we needed to carry it and get people in the know of the German-style bitters,” Lawell said.

Now open for the season, the restaurant plans to add lawn games to the front yard so that patrons can take in the gorgeous lake view while enjoying a drink or waiting for dinner seating. On June 22, look for German offerings from Hügel Haus at Ellison Bay’s Uncork Summer event, and keep an eye out for Oktoberfest celebrations near the end of September.