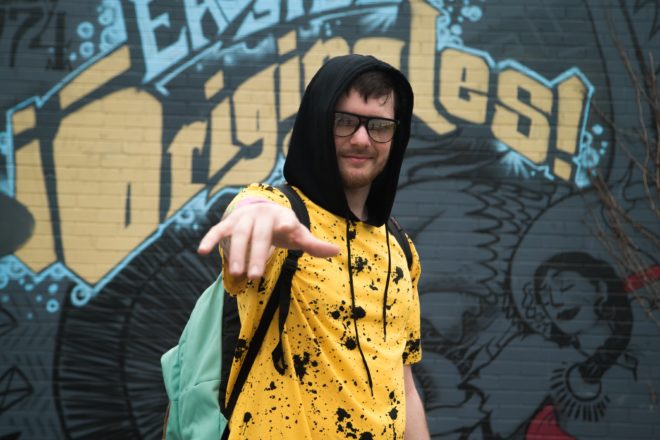 Rap isn’t usually the genre of music most closely associated with Door County, but that may be due to the fact that few hip-hop acts ever visit the peninsula. Residents will have the opportunity to try something different when T-Zank, hip-hop recording artist, visits the Brick Lot Pub on April 6.

Originally from Angola, Ind., T-Zank has been making music since sixth grade, with his first love being the guitar. In high school, his friends turned him onto hip-hop artists. T-Zank heard the rhythmic similarities between rap and playing guitar and realized he had the music sensibilities to pursue hip-hop.

In high school, T-Zank built a strong fan base in his hometown and surrounding area, and he did the same in college at Ohio Northern University. From this initial success, T-Zank was able to book larger shows, opening for the likes of Machine Gun Kelly and Tech N9ne. Capitalizing on the exposure he received from these large concerts, T-Zank embarked on a three-month, 70-city tour in 2014.

From the outset, T-Zank has had a clear mission statement concerning his music.

“My goal is to inspire people and to provide them with something positive,” T-Zank said.

T-Zank pulls from his personal experience to put together fun, upbeat music. In 2017, he released a concept album called Pilot, which compared the stages of flight to the different phases of one’s life. As on a flight, there are moments of anticipation and great change, like takeoff. Then, there are the times of stability, as though one is at cruising altitude.

“And then sometimes you hit some turbulence in your life,” T-Zank said.

Finally, you land and ground yourself for a while, before eventually taking flight again.

T-Zank cites artists like Jimi Hendrix and Jim Morrison as musical influences, despite the fact their genres differ.

“I look up to them as being iconic in their own lane, blazing a trail in their genre,” he said. “That’s what really inspires me.”

T-Zank hopes to carve out the same kind of niche in hip-hop. He looks up to independent hip-hop musicians who have been able to establish themselves without a major label and through the hard work of their own team. He has taken the same approach and has watched his star slowly rise.

His impending show at Brick Lot is part of T-Zank’s “Bluetooth Tour,” which will have him travelling through the Midwest and South. The tour is built upon the success of his most recent single, “Bluetooth.”

These days, T-Zank spends about half the year on tour and the other half working as a producer out of his recording studio in Fort Wayne, Ind. He produces local hip-hop artists, and a few rock and acoustic acts. He is also able to produce for artists all over the world, through the online transferring of files.

T-Zank has played in Door County three previous times, and enjoys the support he has found from audiences here. He understands some people may be turned off to the genre because of the way some mainstream artists portray themselves. He wants to assure skeptics that his music has a genuine message.

“I’m pushing something that is meant to benefit society,” T-Zank said.

Check out T-Zank’s music and tour dates on realtzank.com or “realtzank” on all social media platforms