Humulus lupulus – otherwise known as the common hop – once had a large presence in Wisconsin. During the 1860s, a “hop craze” took place in southern Wisconsin, particularly in Sauk County, which for a short time was supplying a fifth of the world’s hops. As many as 70,000 workers were needed to handpick the Wisconsin hops crop and 30,000 of those were needed in Sauk County alone. That period has also been referred to as Wisconsin’s agricultural gold rush.

“The huge profits made in hop-raising then are comparable to the fortunes made in gold and oil booms today. The owner of a hopyard was rich, he was given unlimited credit, and in many cases he took full advantage of this,” wrote Belle Cushman Bohn in a 1934 issue of the Wisconsin Magazine of History as she reminisced about working the hop fields of Sauk County. 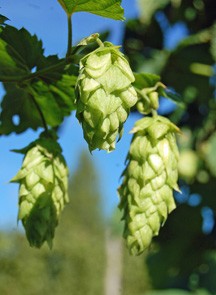 At its high point, hop farmers were selling hop cones for 50 to 60 cents a pound, but in 1867 the market crashed and farmers were lucky to get a nickel a pound.

A volatile market and mildew problems caused the collapse of commercial hop farming in Wisconsin. The industry picked up and moved to the less humid climes of the Pacific Northwest.

But with the convergent success of the craft beer and locavore movements, hop growing for fun and profit is back.

In fact, Hops for Fun and Profit is the name of a workshop being held in Algoma on March 29.

“I think there’s a lot of interest,” said Dean Volenberg, agriculture agent with the Door County University of Wisconsin Extension office and one of the presenters at the Hops for Fun and Profit workshop.

“It all trickles down to the movement to get all local production,” Volenberg said. “Lakefront Brewery has been successful with their Local Acre, using Wisconsin hops, barley and water. They’re even using a local yeast strain for Wisconsinite. Other craft breweries, since we don’t have a big supply of local hops, they’re mainly doing wet hops, using the relatively fresh cones, rather than grinding and pelletizing it and storing it for a long time.”

In addition to Volenberg, workshop presenters will include two of his UW Extension colleagues, Tim Rehbein of Vernon County and Carl Duley of Buffalo County, as well as two hop farmers, John Tucker of Tucker’s Hops Farm and Rich Joseph of The Hop Garden.

“Back in 2008 there was somewhat of a hop shortage out west. Hop prices skyrocketed and a lot of places couldn’t even get hops,” said Rich Joseph. “I’ve homebrewed for 20-some years. I noticed the hop shortage and started reading more about it. I always wanted to do my own business thing.”

Joseph had access to land because his father-in-law was looking to rent some of his farmland in Oconomowoc.

“So I attended some hop-growing workshops,” he said. “I decided to buy 25 rhizomes and put them in the ground in a couple of different locations to see how they’d do. They did fabulously.”

Since there is little research into the ideal hop varieties for Wisconsin, Joseph decided to go with varieties that he knew breweries are using.

“At that time the IPAs were getting more popular, so I was looking at hops for that, but also looking at yields,” he said.

The first year went so well, that Joseph planned to put in an acre of hops the next year. 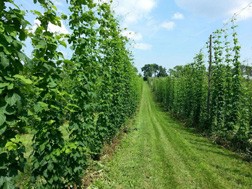 “That acre ended up turning into two acres, and that was more work than we had intended on, that and some beginner mistakes. We rushed our soil preparation and we ran into a wet spring and that didn’t help,” he said. “Before that it was a corn field, and we ended up having lots of weed seeds that came back. We had quite a weedy mess. That was a pretty steep learning curve there. That was pretty close to saying the heck with it. But we stuck with it.”

Driving from his home south of Madison to Oconomowoc to care for the hops became a pain.

“It also became apparent that to get more acres, we’d have to find our own farm,” he said.

Joseph found a 17-acre farm in Belleville, about a five-mile drive from his home.

“We purchased that on a USDA beginning farmers program,” he said. “We were approved for that loan, but it didn’t actually get funded until just two weeks ago. So we’ve been going off a bridge loan with a local bank with a much higher interest rate. That loan will give us more breathing room.”

Joseph said last fall he was adding up numbers for hop income when he said “it became apparent that we were going to have two or three years before we’re going to have income from the hops. I knew we needed to do something. My day job was working in the seed industry. I traveled quite a bit. I knew that probably wasn’t going to work out. So I started coming up with other ways to generate cash flow from the farm. One of those was going for my brewer’s permit and a federal distribution permit. That way we could use our own hops in our own beer.” 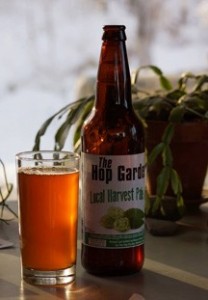 Joseph came up with a recipe for what he calls Local Harvest Pale Ale and contracted with House of Brews in Madison to do the brewing. The first 22-ounce bottles were released in February.

“It’s going over very well,” Joseph said. “We wanted our first beer to be something our friends and family could drink. A lot of time people think craft beer, it’s going to be really hoppy or it’s going to be some weird kind of a taste. We wanted a real approachable beer. We decided to do a traditional pub ale. It’s real well balanced between hops and malt. Folks that drink Miller and Bud can drink this beer and like it. We are going to come out with an IPA in about two months, so the hopheads will be appeased. But we’re going to try to stick to more traditional beers.”

Joseph is also a founding member and vice president of the Wisconsin Hop Exchange.

“Our co-op, the Wisconsin Hop Exchange, has gone basically from six of us getting together four years ago to more than 50 members now,” he said. “I think we ended up with 17 harvestable acres in production last year and this coming year we’ll have about 25 harvestable acres. But that number really grows the year after that. It takes a while for the hops to mature. We had about 8,000 pounds of hops in the co-op this year. Our projection is for 25,000 pounds next year. The year after that I believe the projection is at 50,000.”

Joseph will offer two sessions at the Hops for Fun and Profit Workshop – trellising and planting, and harvesting and drying your hops. Sessions include an overview, bottlenecks of processing and harvesting, planning and site preparation, marketing and pest and disease control.