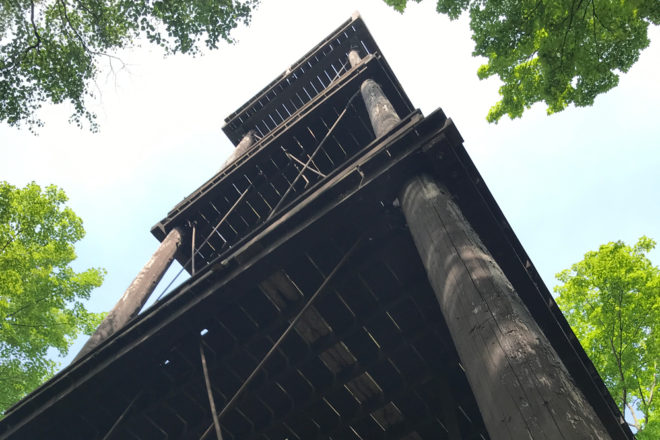 Can the structure be repaired in place without breaking accessibility laws? Yes, no and maybe, depending upon who answers.

The Sturgeon Bay Historical Society Foundation (SBHSF) had been plugging away at efforts to save the 75-foot Potawatomi State Park Observation Tower, only to learn earlier this year that the Wisconsin Department of Natural Resources (DNR) had decided that demolition was the way to go.

“Decisions such as this are not easy,” said Ben Bergey, director of the Wisconsin State Park System, when announcing the decision in February. “The science tells us the tower needs to come down; however, we are working with our partners to explore future opportunities.”

The science Bergey referred to pertains to three assessments done on the tower. The earliest of the three reports indicated the tower could not be saved. The last two – one commissioned by the SBHSF and one by the state – indicate that repairs to the most deteriorated of the structure’s Western red cedar timbers are possible.

“This is a simple repair of an existing historic structure in the state of Wisconsin, and they need to treat it as such,” said Christie Weber, SBHSF president.

The latest step the SBHSF has taken to try to preserve the structure has been to file a nomination to get the tower listed on the National Register of Historic Places. Wm. Jason Flatt wrote that nomination and submitted it June 29. Flatt is a historic-preservation consultant, licensed professional engineer in Wisconsin, part-time historic-preservation specialist for the City of Green Bay and an elected alder for the City of Marinette’s Common Council.

He said the tower is historically significant for its association with outdoor recreation in Door County – including the development of the county’s state parks and its tourism industry – and it’s architecturally significant as the first purpose-built recreational tower in a Wisconsin state park.

The SBHSF received a preliminary opinion from the Wisconsin Historical Society (WHS) prior to submitting its nomination that the tower “may be eligible for listing in the State and National Register of Historic Places,” according to an April 7, 2020, letter from Peggy Veregin, National Register coordinator for the WHS and the Wisconsin State Historic Preservation Office (SHPO).

She said the tower, constructed in 1931, was an “excellent example of an observation tower constructed as a recreational and tourism draw to the newly established park, and having high integrity.” With the demolition of Eagle Tower at Peninsula State Park in 2016, the Potawatomi observation tower is now a “rare survivor in Door County, reflecting this recreational trend,” Veregin wrote.

The Town of Nasewaupee, where Potawatomi State Park is located, is also officially on board with saving the tower for historical reasons. The town board voted June 3 to formally recognize the tower as a local historic structure. The formal recognition further asked that the DNR “repair the tower to preserve its historic integrity for future generations.”

“It’s an icon,” said Steve Sullivan, chair of the Nasewaupee town board. “It definitely draws people to the area.”

Nevertheless, the town doesn’t own the structure; the WHS opinion is only preliminary; and the official historic status, if granted, would not provide insurance against demolition.

“If someone wants to tear it down, they have to work with SHPO,” Flatt said. “That’s not to say they may not still tear it down, but this adds a number of bureaucratic hoops for the state agency to walk through.”

Flatt’s assessment was confirmed by the DNR through Missy Vanlanduyt, recreation/partnership section chief for the Wisconsin State Park System. She said the DNR would need to consult with SHPO if the property were listed as historic on whatever path the DNR chose. But “even if they get the historic designation, it doesn’t stop the DNR from taking down the tower if that’s the course the DNR decides to take,” she said.

SHPO’s Veregin assured the SBHSF last week, while acknowledging receipt of the nomination packet, that state statute obligated the DNR to consult with SHPO regarding any changes to the structure.

“Our compliance manager, Tyler Howe, is in close communication with the DNR,” Veregin wrote, “and they are aware that the tower is in our inventory, that we have evaluated it as potentially eligible, and that we have received a nomination.”

What’s Wrong with the Tower?

The tower has been permanently closed to public access since the spring of 2018. The closure followed a visual inspection done by staff from the Forest Products Laboratory – part of the U.S. Department of Agriculture’s Forest Service – that found “significant decay in the structural and nonstructural wood.”

The SBHSF thought that report looked too similar to the one done on the Eagle Tower in Peninsula State Park, so the group hired its own wood expert: senior engineer and wood technologist Dan Tingley of Wood Research & Development in Jefferson, Oregon. Tingley has a PhD in wood science technology and civil engineering. He holds more than 40 published patents worldwide in the field of wood and high-strength fiber composites, and he specializes in restoring old timber structures.

“He’s a lover and expert of wooden towers,” Weber said, “and he fell in love with our beautiful little tower, and he was like, ‘Yeah, I’ll help you.’”

Tingley completed a Final Inspection and Condition State Report on the tower in March 2019. He found that of the five main tower columns, the southeast and southwest columns were the only two in poor condition, with the bottom four feet in a “heavily degraded state.” He said within the report and during a recorded presentation that he delivered in person in Sturgeon Bay that those two columns can “easily be restored in situ,” or in place, by removing the decayed parts and replacing them with new material.

In summary, Tingley said, the tower has weathered and contains conventional UV section loss, as well as nonstructural cracks and splits, and has two columns with advanced decay and cavities in the bottom four feet.

“However, well over 90 percent of the critical structural elements are capable of continuing on in service to the community with the help of remedial treatments that can be implemented as the tower stands,” he said.

Because of the conflicts between the state’s first report – which indicated the tower should be dismantled – and Tingley’s report, the DNR, with coordination from the Department of Administration, solicited bids for a third-party consultant to review the two reports and provide assessments and conclusions regarding the tower.

Completed in January 2020, that report outlined three possible options: demolish and construct new; dismantle, repair and erect; or repair in situ. The in-situ repair was more extensive than Tingley’s assessment and included not only more repair of the columns, but also reinforcing the platform framing, replacing the stairs and guardrails, and cleaning and restaining all wood materials. Tingley referred to repair items other than work on the columns as maintenance items that were not required to preserve the tower’s structural integrity.

The third report estimated that the in-situ repair would cost $1.5 million, versus Tingley’s estimate for repair of the structural defaults of $249,179. By contrast, the demolition was estimated at $153,100.

If the DNR did demolish the tower, “We do have in the master plan to put other observation opportunities at the park,” Vanlanduyt said.

“That would have to go through the budget process.”

The cost of demolition – combined with the cost of whatever the future observation opportunities would be – are just one more reason, Weber said, why Tingley’s repair should be done.

“We’re trying to get them to do the right thing for less than $250,000 in doing the repairs so it can last another 100 years if it’s maintained,” Weber said.

Conflicting Opinions on Whether ADA Accessibility Is Needed

The DNR determined that the options in the third report would require the tower to be physically accessible in accord with the enforceable accessibility standards under the Americans with Disabilities Act (ADA) of 1990. As such, the DNR made the decision to dismantle the tower. Specifically, even the in-situ option would be considered an alteration rather than a repair, Vanlanduyt said, and “when something is considered an alteration, the accessibility requirements kick in.”

Yet the third report, despite having a larger in-situ scope of work than Tingley’s, specifically states that the repair is not an alteration because it doesn’t involve a reconfiguration of the space.

“Repairing the individual deteriorated parts of the tower as it stands without significantly altering the configuration of the tower would be considered a repair,” according to the report.

But Vanlanduyt said that finding is “subjective” because engineers “are not legal experts; they’re engineers.” Instead, the DNR’s legal team has called the shots on whether the option triggers accessibility, and it has decided that, based on the scope of the in-situ work, the project would be considered an alteration.

“If someone could find us an ironclad law that would say you do not have to make this accessible, that would be a game changer,” Vanlanduyt said. “If a law could protect the department from not being sued, that would change the discussion. In the legal team’s opinion, there is no such law.”

That was the understanding of Rep. Joel Kitchens (R-Sturgeon Bay) as well. He said last week that he supported saving the tower, and the issue of doing so was not related to money.

“They certainly have enough money to afford to be able to fix it,” he said.

His understanding was that there was no way around the accessibility requirement, yet he was hearing conflicting opinions. So earlier this week, he sought legislative legal advice. He said Tuesday he was advised that a “very strong argument” could be made that an in-situ repair of the kind under consideration would not alter the tower’s current use and therefore would not trigger ADA requirements for accessibility.

He said he understood the DNR’s reluctance to take the risk, but the legal opinion he received would prompt him to do more research.

Time and Mother Nature, rather than demolition, may be more imminent threats to the tower.

“We have until this fall to have repairs done, and they’re crucial repairs,” Weber said. “It has decay that needs to be addressed, and it has to be addressed now. We want to get it repaired as soon as possible. Time is not our friend.”

“A significant storm or wind event, and that tower could come down on its own,” Vanlanduyt said.

Weber said that Tingley’s group would be willing to do the repairs this fall. That’s what the SBHSF wants the state to authorize before winter conditions further compromise the tower’s structural integrity.

Meanwhile, Vanlanduyt said the DNR knew the SBHSF would seek historic status for the tower and decided it would connect with the SBHSF through November. Until then, she said, the DNR “would make no significant effort to move to demolition.” As such, the DNR has not “made any steps toward demolition,” including putting the project out to bid. What will happen after November is uncertain.

“It’s not 100 percent given it will be taken down in November, nor is it 100 percent a given that we won’t,” Vanlanduyt said. “That’s kind of where we are at.”