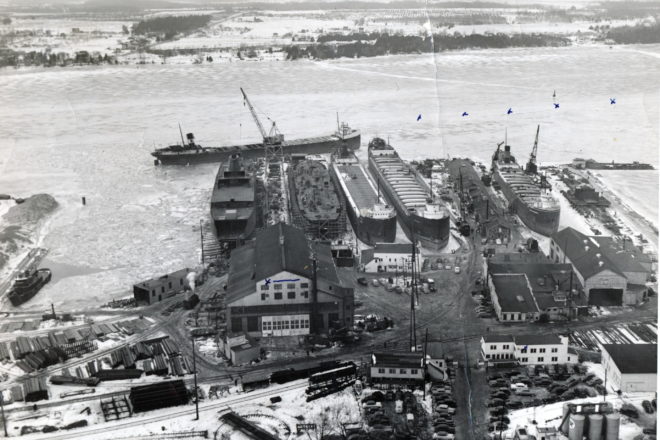 This historic Sturgeon Bay shipyard aerial photo shows the Christy Corporation, and was taken by Herb Reynolds on Jan. 3, 1952. Several things are interesting in this photo. Note the railroad turntable that once existed for turning locomotives around since the shipyard was at the end of the railroad line. In 1899, Door County was the last of Wisconsin’s 72 counties to get a railroad. It was the Ahnapee and Western Railway. We were also the first county to lose the railroad. The last train trip across the old, wooden railroad bridge was in 1968 when Shriners were briefly brought over to the East Side from Casco, and then the empty passenger cars returned back across the swing bridge. The last locomotive moved out of Sturgeon Bay on Sept. 4, 1969. This was a diesel locomotive that was stored in the Quonset hut building that still exists on the Roen Salvage Co. property off of Neenah Avenue on the west side.This photo also shows a shipyard tug clearing a foot of ice out of the bay so the car ferry Spartan, shown on the left, can be launched the very next day. The car ferry Badger, is shown being built to the right of the Spartan. Note that the now discontinued First Avenue did not even exist at this time.