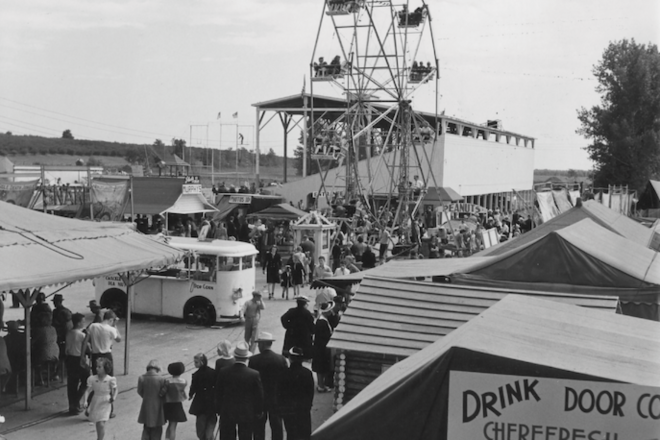 When the carnival rides hum to life, the sweet smell of funnel cakes wafts through the air, and the county’s youth unload their pigs, cows, and crafts along the midway at the Door County Fairgrounds on July 28, the 150-year legacy of the Door County Fair will live on. Behind the entertainment and thrills rests a history of the county’s culture and development that gives much more back to the community than several days of fun.

“It draws a large number of people that come just to get together, mingle and enjoy each other’s company while watching good entertainment at a reasonable price,” Ash said.

Preparation for the 150th celebration began well before the 149th edition was over. It takes some foresight to book heartland rockers BoDeans, the legendary Midwest outfit Head East and the large roster of stock-car racers, wrestlers, motorcyclists, fireworks professionals and other entertainment offerings that will fill the midway and grandstand at John Miles County Park in Sturgeon Bay, July 28 – Aug. 1.

For Ash and many other area residents, the real engine of the fair is the opportunity for the county’s kids to show their hard work to the rest of their community through livestock shows, craft displays and competitions. Those events were the hallmark of the fair long before electric guitars and Ferris wheels.

Although the fair is celebrating 150 years, newspaper archives maintained by the Door County Library suggest the first fair was held Oct. 20 and 21, 1869. The Door County Advocate issue dated Sept. 30, 1869, describes the “goodly attendance at the special meeting of the Agricultural Society,” where members decided to hold the first annual county fair.

A 100-year retrospective written by Stanley Greene in the Aug. 10, 1971, issue of the Door County Advocate describes the fair as a byproduct of the Civil War, when the area was looking to further develop its agricultural economy after relying on fish and lumber.

News reports tell of the first fair as a “decided success,” but it didn’t last. Politics and a lack of attendance shut the event down for most of the next 30 years. In 1908, local promoters and agricultural producers revived the fair at the same location where it’s held today.

Since the early years of the fair, the event has evolved with the times. The fair in 1941 marked the first four-day festival. Shuttered for three years during World War II and during the polio epidemic of 1956, the Door County Fair even survived the COVID-19 pandemic of 2020, when virtual events provided a way for people to connect and share their work from the year past.

“They really missed it last year,” Ash said. “It’s for the children, the school-age kids, the FFA kids, to let them showcase their artwork, their stuff, all the hard work they’ve done.”

Headlines often declare the approaching death of county fairs as attendance wavers from year to year and changes in the agricultural industry similarly change the fabric of the event. But Greene’s statement in 1971 is as true today as it was then.

“It is surprising to find how many times in the past public opinion has pronounced the fair dead,” Greene wrote, “only to find the corpse scrambling out of the grave more alive than it ever had been in the past.”

The 150th celebration of the Door County Fair is a testament to the resilience of the event and the community it represents.