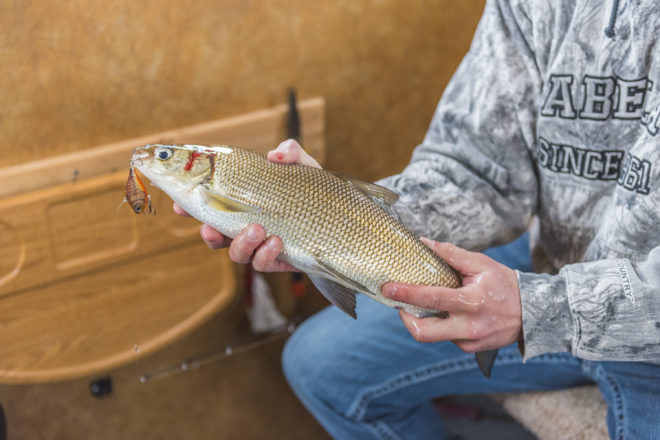 Joe Koors holds up a whitefish he reeled in off the shore of Egg Harbor. Photo by Len Villano.

It was 1857 when a few New Englanders wanted a taste of lake whitefish. Carl Miller and Henry Brown went to Lake Ontario and took male and female whitefish out of fisherman’s nets. They impregnated an estimated one million eggs and brought them back to Lake Saltonstall in Connecticut. The next year, they brought 10 million trout and whitefish eggs. The dream of stocking the light, tasty whitefish across the nation had begun.

The whitefish is one of the most successful commercial fish in the Great Lakes. It likes to swim in big schools, making an easy catch for fishermen with nets. While its proliferation in sport fishing culture is a modern one, it has fed the residents of the Great Lakes basin for centuries.

French explorer Antoine-Denis Raudot was one of the first from Europe to recognize its universal appeal.

“[Whitefish] must be the best fish in the world, since all those who have eaten it say they never grow tired of it and prefer it to all other meats that one could find,” he wrote in 1710.

American Indians would catch the fish with nets, a practice made easier by the whitefish’s habit of schooling in big groups. Natives would eat them immediately or dry them out and grind the meat into powder to use in stews. As settlers moved into the Great Lakes region, they relished the delicate fish for its light, meaty texture and its availability throughout the Great Lakes.

As adventurers moved west in the mid 1850s, their fear of unknown conditions made them long for a sure meal. In 1872, the United States Fish Commissioner, Spencer Baird, responded to their longing with a shipment of 50,000 whitefish eggs from Lake Superior to Clear Lake, California, a large inland lake 80 miles northwest of Sacramento. Half of the eggs died in transit, but that didn’t stop Baird. He sent another 20,000 eggs from Lake Michigan to Berkeley in 1875 and, between 1877 and 1883, more than 1,000,000 eggs traveled west in hopes of feeding the growing population in a region where hungry travelers stopped and the cozy east coast was far away.

In Milwaukee, 10 million whitefish and lake trout eggs hatched in the engine house of the Milwaukee Water Works, where a temporary hatchery was set up in 1875.

“The results attending the introduction of whitefish into California waters have been extremely meager, if not altogether negative,” wrote the Bulletin of the United States Fish Commission in 1895. “While it is possible that the fish have in certain waters been overlooked, owing to the nonprosecution of commercial fisheries and the absence of scientific investigation, it is known that they have not attained economic importance anywhere in the State and have never been taken, in recent years, in some of the waters in which they were planted.”

This struggle to stock was not exclusive to California. From the very start, James Milner, Great Lakes deputy commissioner with the U.S. Commission on Fisheries found that the whitefish did not take to new waters easily.

“They were found to be very delicate and difficult to hatch in the first few years of experimenting, but methods were perfected that made their production as certain and losses nearly as small as in other species,” Milner wrote on that first transfer of whitefish eggs in 1857 by Miller and Brown.

Most of the whitefish eggs shipped around the country originated in Oakland County, Michigan. While individual observation and word of mouth judged the success of these stocking operations, Frank Clark, superintendent of the U.S. Fish Commission Station at Northville, Michigan, recorded the first time whitefish were actually grown successfully in the facility at Northville in 1882. Reproducing the fish in his fishery, his lab satisfied the craving of whitefish as far as New Zealand, Australia and Germany. Within the United States, whitefish eggs were sent to states from Maine to Maryland and Wyoming to Kentucky. Everyone wanted a taste of the delicate whitefish.

But Clark did not forget the waters surrounding his own state. For at least 20 years starting in 1876, Clark puts the total number at 677,176,000 of stocked whitefish, adding there might be a better way to go about the sustainability of the Great Lakes most sought after commercial fish.

“It would seem proper that the time has arrived when we should see if there might not be some better means for introducing the fry in the Great Lakes especially,” wrote Clark. “It is true that in some few of our inland lakes throughout the United States the whitefish planted have done remarkably well, but for our Great Lakes some new method must be adopted for introducing the fish in the waters.”

In the past few decades, the practice of stocking whitefish in Lake Michigan and Green Bay has disappeared after cleaner waters and better population management.

“There is no stocking. Definitely not in Green Bay,” said Scott Hansen, fisheries biologist with the Wisconsin Department of Natural Resources (DNR). “We don’t have any in our hatcheries.”

Hansen explained that the population in Green Bay has exploded in the last 10 to 15 years due to the colonization of the bay’s nearby rivers after a century of dormancy.

“We’ve documented little baby fish coming out of these rivers,” Hansen said of the Fox, Peshtigo and Oconto rivers. “They ran these rivers and spawned in these rivers, but that was way back in the late 1800s and early 1900s. Part of the reason they’re successful there is because those rivers are now being cleaned up. In the early 1900s there was so much pollution from the mills and a lot of overfishing issues they just couldn’t spawn there anymore.”

Hansen added that booming whitefish populations throughout Lake Michigan in the 1990s led to crowding in spawning sites. Whitefish were forced into rivers to spawn and their offspring, learning that they could in fact survive in the Fox River, stayed and repopulated.

“Lake whitefish seem to be resilient to Great Lakes ecosystem changes,” said John Janssen, professor in the School of Freshwater Sciences at the University of Wisconsin — Milwaukee. Sea lampreys, a predator that decimated many fish populations in the mid-1900s, are relatively under control while the fish have managed to reproduce in rivers that haven’t housed spawning fish in more than a century.

The invasive zebra and quagga muscles took to the waters of Lake Michigan at the same time as the 1990s whitefish boom, severely depleting the whitefish’s favorite food, diporeia. With a larger population and even less food, the whitefish adapted to scavenge and eat smaller fish, despite the fact that whitefish do not have any teeth.

While Carl Miller and Henry Brown couldn’t have known of this resilience when they brought millions of eggs from Lake Ontario to small Connecticut lakes, they could hardly have picked a better fish.

“The population was down considerably,” said Hansen of the last whitefish stocking. “It’s ebbed and flowed and it really tanked back in the ’50s and ’60s. Throughout much of the 1900s the population was in tough shape.”

In the mid-1900s, fish populations declined nationwide, from Atlantic cod to sardines and our hometown whitefish. Sea lamprey predation, overfishing and the loss of spawning habitats squeezed populations that have only begun to recover in the last two decades.

During that recovery, states stocked whitefish to help the commercial fisheries, another practice that has been abandoned.

He explained that fish from hatcheries have not gone through the natural selection to strengthen them for the big lake. When they breed with wild fish, it can weaken the overall population, a theory that has opened up debate as to whether fish stocking should stop altogether.

While today’s whitefish population in Green Bay is booming, things are not looking as good across the peninsula. Population throughout Lake Michigan has struggled since peaks in the 1990s.

“The ones that are fished by commercial fishery, Baileys Harbor and north, that population in the last five to 10 years has actually shown an opposite trend,” Hansen said. “They’re reproducing to an extent but not as well as they used to and they’re not replacing themselves. Green Bay is kind of the exception to the trend [in Lake Michigan] right now.”

Hansen said there have always been fluctuations in whitefish population in the lake, but after many years of low numbers, the DNR has started watching more closely.

“Because Lake Michigan has changed so much from these invasive species, it’s becoming much more nutrient poor. They are just not surviving well enough.”

Although Hansen doesn’t see another round of whitefish stocking in the future, he still wouldn’t rule it out if the population in Lake Michigan doesn’t recover.

“Right now that isn’t even being discussed,” Hansen said. “We’re not in a dire situation but we definitely have concern. I don’t think you could rule it out in extreme cases. The lake population, that’s the backbone. That has been around through thick and thin.”