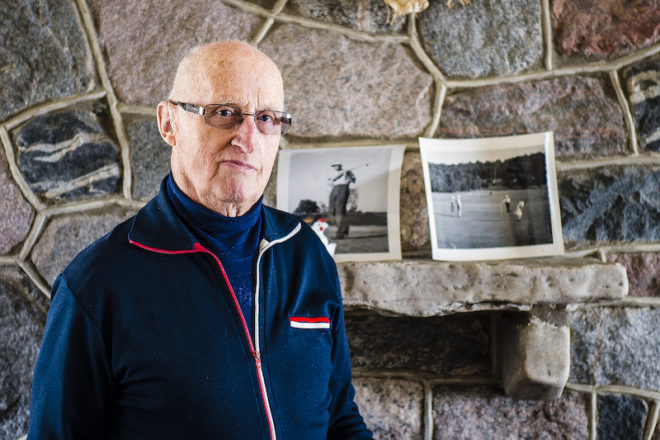 You can get an impression of the grand old days by showing up for dinner at the Alpine Resort. Real birch-bark wallpaper and white wicker furniture in the lobby greet guests, and in the dining room, white tablecloths, wood floors, a view of Egg Harbor and the resort’s antique glass-globe lights on a seawall are treats for the eyes.

But if you take a closer look around the two lobbies and a hallway, you can learn all about the history of the Alpine, the family that has operated it for 96 years, famous guests and life in Door County. During the past few decades, rather than throwing out or selling unusual things, owner Bill Bertschinger and family members have assembled dozens of museum-quality exhibits in part of the 1922 section of the lodge and especially in the Tyrolean Room, the Swiss-themed lobby that’s part of the 1927 addition.

“My wife bought those cabinets from a jeweler who went out of business in Sturgeon Bay,” Bill said. And that’s how the displays evolved. 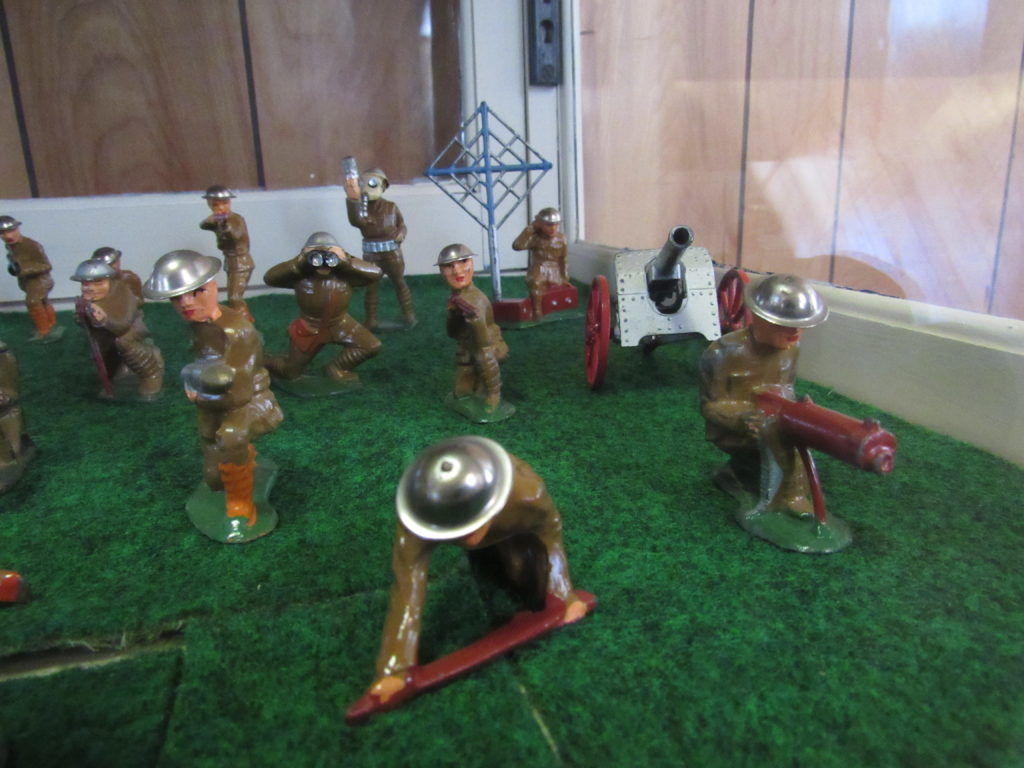 Toy soldiers on display at the Alpine Resort.

With the Alpine Resort for sale – but opening this month and getting a lot of urgent reservation calls from longtime guests – Bill said he’s not sure if the old items will go along with the lodge sale. He said some items are on loan from former employees and an antique organ is on loan from a local family.

“I have no idea what’s going to happen to all the mementoes. Some items are personal, of course we’d retain those,” he said. Many things had been collecting dust for years in the fourth-floor attic. Many came out of the Egg Harbor home of Bill’s father, Paul, as well as Paul’s desk.

There’s so much to look at, it’s tough to take it all in. Turning on lights for a photographer, manager Cindy Bertschinger Livingston said she noticed a few things, such as a Popeye’s ring toss game and a miniature toy bowling game that she’d never seen before. Next to that, she’d certainly noticed some of the antique dolls. And she sometimes points them out, to get a rise out of young guests.

“There was a kid on a laptop. I said, ‘Did you ever notice these dolls, their eyes follow you wherever you go?’ He got up and ran out.”

Over her shoulder, a pair of lederhosen hang in front of a wintry-looking board game, Admiral Byrd’s South Pole Game. When they were growing up, kids in the family including Cindy wore lederhosen and participated in Sunday sing-alongs on Sunday nights.

The pleasure boat took about 20 people to Chambers Island or Peninsula State Park. Insurance costs caused the resort, like many nationwide, to stop providing the boat rides, as well as a powerboat for fishing, plus horseback riding at the stables, Bill said. 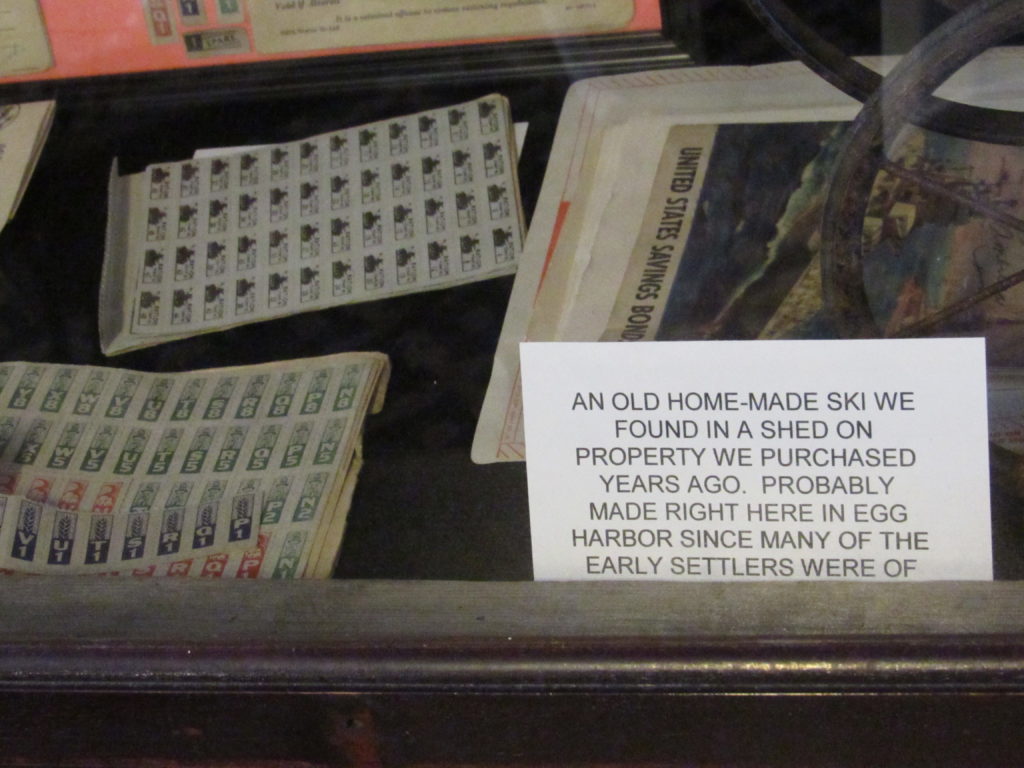 One case has Bill’s Korean War medals, Bertschinger family members’ baby shoes from the early 1900s and toy soldiers in World War I gear in various positions. Some are taking aim with guns, some are throwing grenades or holding binoculars and several are wounded on stretchers. In the 1930s, Bill’s mom bought the lead soldiers for him for 10 cents apiece.

“She would go to Sturgeon Bay to do her shopping and she’d always bring him one Army guy,” Cindy said.

What else can you find in the cases?

Bill said of the items on display, “I felt fortunate every now and then to find something.” 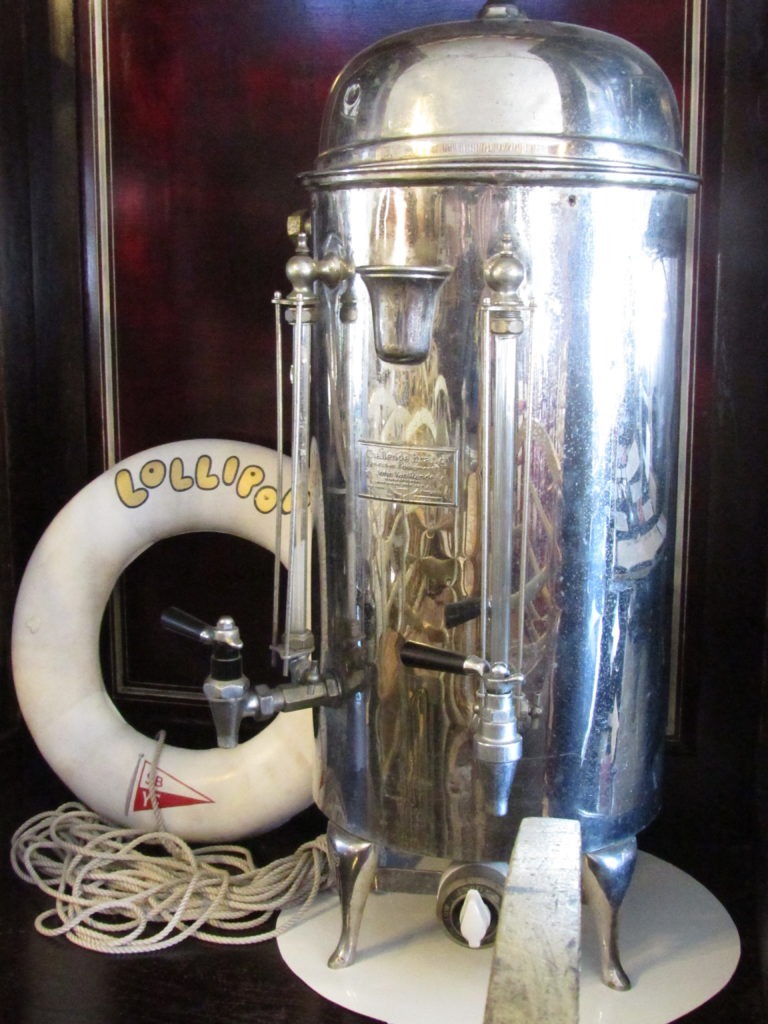