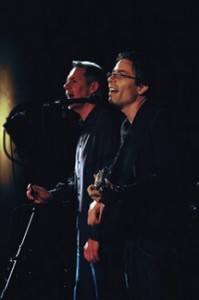 AJ Swearingen and Jonathan Beedle will take the stage and perform the greatest hits from Simon & Garfunkel on June 16, 7 pm, at the Peg Egan Performing Arts Center in Egg Harbor.

Swearingen and Beedle have performed this tribute to the music of Simon & Garfunkel for more than a decade and their sold out shows prove the effect on their audiences is undeniable. A chance meeting in 1991, in a local club in Bethlehem, Penn. brought these artists together. A brief introduction and moments later they were blending their voices as if they had been performing together for a lifetime.

Director Terry Lundahl says, “We are so fortunate to have this show take the stage again this year. It’s sure to be a favorite!”

Peg Egan PAC is located on Church Street in Egg Harbor, and all concerts are free and open to the public. In case of rain, all concerts are held at the Calvary Methodist Church 4650 Country Rd. E, Egg Harbor. For more information, call 920.493.5979.