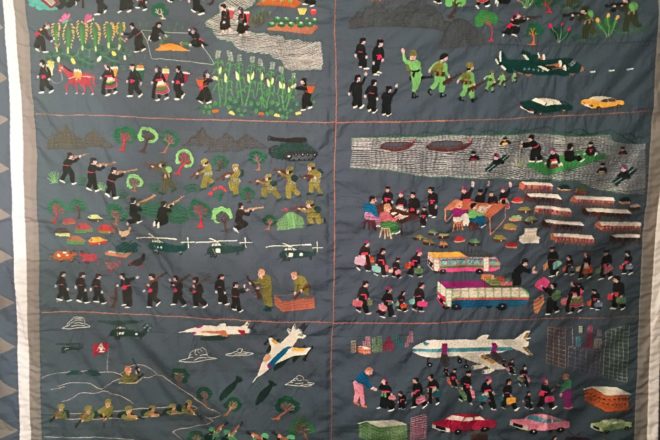 This textile artwork by Nhia Neng Xiong tells the story of Hmong involvement in the Vietnam War and its aftermath. This and more needlework embroidery from the Hmong community of Green Bay will be demonstrated and exhibited at the Sturgeon Bay Library on Feb. 7 as part of Door County Reads 2018. Submitted.

The Hmong American community makes up almost one percent of Wisconsin’s population and represents the largest Asian ethnic group in the state. And yet, some Wisconsin natives would be hard pressed to tell you where the Hmong community emigrated from, and what exactly their story is.

Sturgeon Bay Library looks to correct that with its Door County Reads event, Hmong Textile Art. On Feb. 7, 2-4 pm, those in the community will have the opportunity to meet Hmong women from the Green Bay Hmong community, hear their stories, and watch as they create beautiful, embroidered pieces.

This event is held in conjunction with this year’s Door County Reads selection, The Latehomecomer: A Hmong Family Memoir by Kao Kalia Yang. Wa Yia Thao, who works as a Student Support Specialist at Northeast Wisconsin Technical College, organized the event. Along with the embroidery event, Thao will host a panel of speakers Feb. 3. The panel will be made up of former Hmong soldiers as well as second-generation Hmong from Green Bay, whose parents immigrated to the United States.

Thao has his own unique story, though he says his family’s journey to the states is emblematic of the experience of many of those in the Hmong community. The Hmong, an indigenous group of people from Southeast Asia, fought in Laos alongside Americans in the Vietnam War. When the Americans withdrew from Laos, Hmong were left completely vulnerable in Vietnam, with no easy way to leave the country. Hmong people who did not feel safe in the country were forced to try to make their way to a refugee camp in Thailand.

“Many walked through the jungle for a month or more than a month. Many died on the way,” said Thao.

Thao’s earliest memories come from his time as a young child in the Thailand refugee camps. His family would be forced to stay in this camp for 11 years until they were finally sponsored by a church in Oshkosh. Thao’s family was moved to a special camp for an additional six months to learn English, and then moved to Oshkosh to try to begin a life anew after so many years in limbo.

“All of a sudden, we were just dropped in a place we did not expect to be,” said Thao.

Many Hmong people have stories similar to that of Thao, and Wisconsin today has the third largest population of Hmong people in the country, after California and Minnesota.

The needlework embroidery has a rich history and some work has been discovered from when Hmong were in China. While they were at war with the Chinese, it is believed that the Hmong used the needlework embroidery as a language to communicate secrets with one another, which the Chinese would be unable to discern. Today, the embroidery work can feature a simple and beautiful pattern, or tell an illustrious and epic story. The importance this art form has to the Hmong community can’t be understated.

“To the Hmong, it means their heritage, culture and life,” said Thao.

People will have an opportunity Feb. 7 to watch women create this art in person, artmaking that is usually reserved for special Hmong occasions such as a wedding or funeral. In addition, the Miller Art Museum will facilitate the sale of completed embroidered pieces.