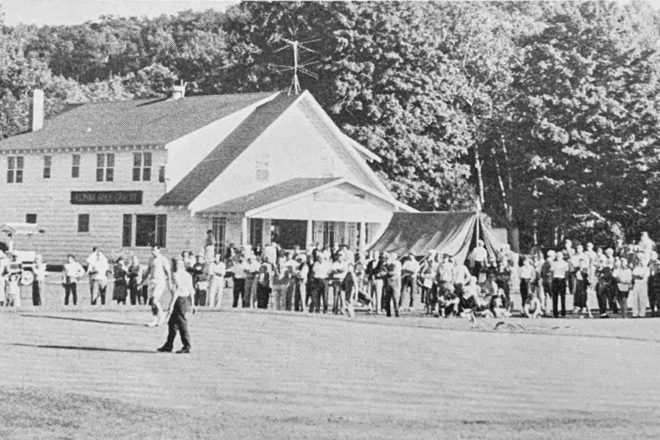 Local readers took notice of a Fairways-section story last year on the 1970s highway construction that put an end to the old Leathem Smith golf course. But the beginnings of the course also grabbed the attention of an Indiana reader who’s a golf-history hobbyist.

John Griffin studies early-20th-century golf-course designers William Langford and Theodore Moreau. Newspaper clippings show that the Door County Country Club opened around 1921 on the Sturgeon Bay site that later became home to the Commodore Hotel and golf course, and then the Leathem Smith lodge and links. Griffin found documents showing that Langford and Moreau helped to redo the course in 1930, during construction of the hotel.

Griffin said a Green Bay golf professional, W.R. Lovekin, played a role in the early design of the course. A 1922 article showed that Lovekin and three other pros, including Door County Country Club’s Alex Mitchell, played the first competitive match at the course, competing for a $100 prize.

Langford and Moreau worked on approximately 120 golf courses, mostly in the Midwest and Florida, Griffin said, and he became interested in the two designers after playing a vacation round at Lawsonia in Green Lake, Wisconsin.

Passersby on Highway 42/57 can still see a distinct outline of a green east of The Lodge at Leathem Smith.

“Greens were frequently built up, creating deep bunkers around them. Fairways bunkers were usually backed by large mounds to give them additional depth,” Griffin said of Langford and Moreau’s old push-up greens.

Langford, Griffin said, grew up on Chicago’s west side. He contracted polio as a child and learned to play golf as rehabilitation. After his years at Westward Ho Golf Club in Chicago, he played on the Yale University golf team, which won the national intercollegiate tournament each of those years. Langford then studied mining engineering and later pursued golf-course design as a profession, Griffin wrote.

After three years at American Park Builders, based in Chicago, he partnered with Massachusetts Agricultural College graduate Theodore Moreau, who focused more on the construction end of their business, Griffin said.