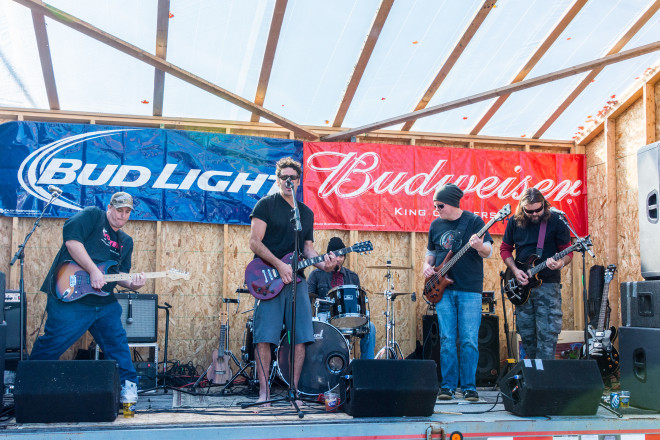 The party that is Sister Bay’s annual Fall Festival weekend, celebrating 70 years this October, will feature Hoi Polloi, a band that promises to keep the party going both afternoon and night.

“Everyone thinks it’s a Hawaiian word (Hoi Polloi) but it’s actually an old Greek word that means ‘the masses,’” says Sean Carroll, a vocalist and rhythm guitar player for the band. “We feel it’s a fair representation of us and some of the folks that come see us play.”

The Milwaukee-based band has had partygoers burning down dance floors since 2006 and is comprised of five members: brothers Sean and Andy Carroll, Don Wiggins, Matt Ray, and Brett Fauster.

A jam session in a mutual friend’s basement is where the eclectic mix of reggae and funk that is Hoi Polloi took root. Sean met Wiggins and a friendship was quickly forged. Wiggins taught him reggae bass and their collaboration led to the formation of the band. 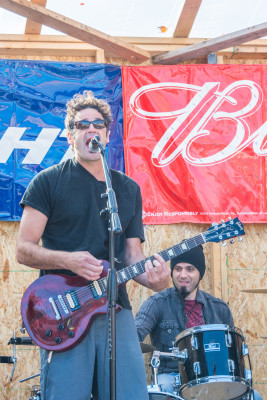 The group has found great success in playing at a variety of venues in Wisconsin as well as the country at large.

“Wherever we go we bring a good time with us,” Wiggins says. “There is no other reason to live except for good times.”

In regards to the Hoi Polloi experience, “You’d expect to hear some of the best songs done our own way,” Carroll says. “We cover music from four decades ago up to our current stuff and up to our own stuff.”

The popular group found its way to Door County through a friend’s wedding about six years ago. Hoi Polloi provided the entertainment at the wedding reception and impressed fellow wedding attendee James Larson, general manager of Husby’s Food and Spirits. Larson invited the band to play at Husby’s and they gained popularity among locals. Now the band heads to Door County several times a year to play at Husby’s and private parties in the area.

The two bandmates have been impressed with the celebratory spirit of the Door Peninsula masses over the Fall Fest weekend.

“I just thought it (Door County) was a sleepy little getaway for Illinois folk but at Fall Fest, you people know how to party,” Wiggins laughs. “It kind of freaked me out.”

It’s doubtful Fall Fest attendees have forgotten how to party and everyone can enjoy the band Saturday afternoon from 12:30 until 3:45 pm on the Sister Bay Bowl/Husby’s stage and then the party will continue indoors at Husby’s from 10 pm until close.

For more on the band, visit HoiPolloiLive.com or find ‘The Polloi’ on Facebook.