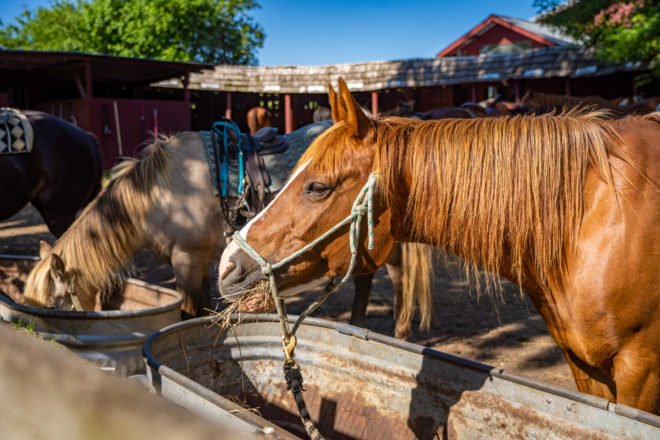 Gamma and the rest of the horses are next to the office at Kurtz Corral. When we got there at 8:45 am, the horse hands were feeding them hay, talking to them, patting them and making sure they were ready for their riders. Photo by Rachel Lukas.

Kurtz Corral and the man behind it

On any given day, you can find Jimmy Kurtz where I found him – with his horses, instructing riders at his corral.

“You guys are doing a great job,” he said. “Keep them moving.”

Jimmy’s grandfather, Lloyd Kurtz, started Kurtz Corral in 1961 as a small pony ring in Egg Harbor. Lloyd was primarily a dairy farmer, and Jimmy said it was his grandmother who actually kicked off the corral idea.

“She told my grandfather, ‘You got more horses than cows on the farm,’” he said. “You’re gonna start making money with them or get rid of ’em, and that wasn’t an option, so Kurtz Corral was incorporated.”

Jimmy bought the business in 1972 and moved it from his grandfather’s farm to his great-grandfather’s homestead – the corral’s current location east of Carlsville.

It also offers much more than a pony ride now because guests can choose from arena rides and trail rides. The arena ride is for younger, more inexperienced or first-time riders, Kurtz said, though you don’t have to go on an arena ride before experiencing a trail ride.

“We start the kids in this [arena] ring on the older horses,” he said. “We call them the geriatric squad.”

Once in the saddle, riders get a feel for stopping, starting, steering and simply being on a horse. The day I visited, Kurtz was out in the corral directing the two kids in it, giving advice to the guides and calling out pointers as they circled the arena.

“Heads up, heels down, keep looking at your destination,” he said, walking alongside one of the horses. “When you’re turning a horse, you look to where you want to go and then draw your hand toward it … Woah, sit straight, heels down.”

With 60 years of experience with the corral and 50 years running it, it’s no surprise that Kurtz has quick-draw knowledge and is able to dispense advice about riding effortlessly and impressively.

“When we opened up, there were 17 other stables in Door County,” he said. “But through time, we’re the only ones left.”

Part of the difficulty in running such a business is finding people who can put the heavy saddles on in the morning and take them off at the end of the day. Not many people realize what a physically strenuous job it is, Kurtz said.

The corral has about five employees right now, and “we are always looking for horse people who are people people,” he said. “A lot of horse people are tough with people. They talk to people like they’re a horse,” Kurtz continued. “I’m one of ’em.”

The trail rides, which are about an hour long, take visitors ages 6 and older through some of the more than 500 acres that the corral uses throughout the year.

The wooded area in particular is great for winter rides, Kurtz said. They tell people to dress for the weather, and they offer apple cider and a little campfire in the barn when the riders get back.

“Bring warm thoughts to your body so you leave here happier,” he said.
“You’re halfway to the North Pole here in Door County, so you gotta learn to dress for the weather.”

The weather on the day of my visit was good – breezy, but sunny. And it was perfect for Olivia Brisch and her sister, first-time rider Grace Brisch, their aunt Jackie remarked.

But whether it was the nice weather or the horses or the handlers, both girls looked right in their element, Kurtz said.

He turned back to the arena behind him. “You’re doing a good job. Heads forward, heels down. Real good.”