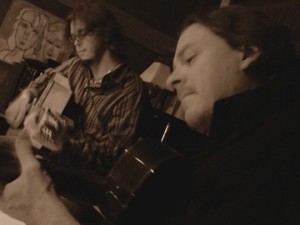 Sturgeon Bay may not have a year-round intimate jazz club, but they will for one night at The Holiday Music Motel in downtown Sturgeon Bay.

Back for their third appearance at The Holiday, on Jan. 31 at 7 pm the Caravan Gypsy Swing Ensemble returns to inundate listeners with their own unique take on vintage hot swing and gypsy jazz performing both originals and long-time classics.

The idea for Caravan started in early 2002 when Chris Ruppenthal, the group’s leader and an aspiring jazz guitarist, first heard recordings of Dutch gypsy jazz guitarist Jimmy Rosenberg who played in the Reinhardt style. Ruppenthal soon turned away from the American Bebop style of jazz guitar to follow in the long shadow of Django and was inspired to seek out fellow gypsy jazz enthusiasts.

Caravan sprang out of that inspiration as a trio of two guitars, and violin. The trio played a barrage of open mics and busked at local farmers markets to get their repertoire together. After adding a bassist and clarinetist they began playing coffee houses, clubs, and parties. Soon they were recording, and performing consistently throughout the Midwest.

Caravan has had substantial experience with live performance throughout the Midwest. They have performed in a broad range of settings including concert halls, festivals, nightclubs, and corporate events. They have had a wide variety of live radio experience including numerous appearances on Wisconsin Public Radio’s Higher Ground with Jonathan Overby.

Caravan Gypsy Swing Ensemble has become an experienced, seasoned group with a diverse repertoire, and a unique voice in the Gypsy jazz genre. They now perform in lineups that range from a two-guitar duo to a six-piece ensemble including clarinet, violin, and drums.

Although the music of Django Reinhardt is still at the core of the band they have learned to take Gypsy jazz music in a broad range of directions.

Holiday Music Motel is located at 30 N. 1st Ave in Sturgeon Bay. Tickets can be reserved by calling 920.743.5571 or visiting holidaymusicmotel.com/tickets.