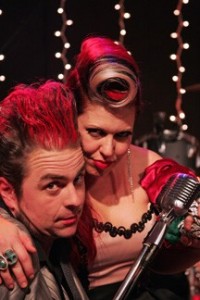 Ruby James and Stephen Cooper will open and close both Love on Holiday performances at Third Avenue Playhouse with the WIFEE and the HUZzBAND. Photo by Ty Helbach.

Musician Ruby James swore off dating when she spur-of-the-moment accepted a summer bartending job at Gordon Lodge in 2012. “I was going to go home to LA, I’d been running away from it my whole life,” she recalls. But her friend and follow musician Anna Sacks, along with a Tarot reader, encouraged James to stay in Door County.

“I had no car. Just a suitcase and a guitar,” smiles James. “I had sworn off boys. I was just going to ride my bike and meditate.” A month later, Stephen Cooper was late to play a gig at Gordon Lodge. “I ran across the lawn with my horn,” laughs Cooper. After a set he approached the bar, “Does the band get a Coke?” he asked, their eyes met and something happened.

A few days later, James borrowed a car to see Cooper play in Green Bay. “I was intrigued by this person,” she smiles at Cooper. “At the gig he was looking at me and smiling and that was it. We talked for hours that night.”

He also tells of his friend, a clairvoyant, the last person he spoke to before he left after playing gigs in New Mexico, who said, “Before you get in that car, I need to tell you this – you’re going to meet a blonde [don’t let the red fool you, James is a natural blonde], she’s from Texas [James lived in Austin before moving to Door County], she’s gonna turn your shit upside down, and it’s going to go fast.”

Two weeks after the couple met, they announced their engagement at pat mAcdonlad’s birthday party at Poh’s Corner Pub in Sturgeon Bay.

“Why do you always upstage everyone?” mAcdonald, the creative director of The Holiday Music Motel, teased James at his party.

So began not only a romantic relationship, but a musical collaboration as well – spearheaded by a writing intensive held at The Holiday in conjunction with Valentine’s Day – Love on Holiday.

“We wanted to have something that was not just a romantic celebration for couples,” explains mAcdonald, who also co-organizes Steel Bridge Songfest and Dark Song songwriting events with his romantic and music partner melaniejane. “We wanted something to show the two sides of love – songs of love or love gone away. There are songs that make people feel good about being in love and other songs that make you feel good about not being in love.”

“I never thought I could write a happy love song,” admits James, who started penning lyrics when she was a teenager. “My first way of writing songs was I would sometimes light candles and play the piano all weekend. No one encouraged that in me at all. I did that in private. I would take songs that were popular and write my own words to them.”

Since writing with Cooper, a jazz musician, James says her writing is “expanding, gotten a lot more advanced.” 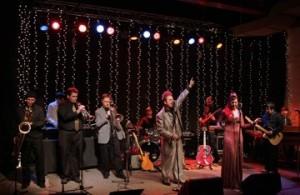 WIFEE and the HUZzBAND was formed at last year’s Love on Holiday songwriting event at the Holiday Music Motel. Photo by Ty Helbach.

“He improvises on the fly,” adds mAcdonald.

“It’s great to write with him,” says James.

James and Cooper wrote their first song together at last year’s Love on Holiday, “Forever My Dear.” They also formed a band, WIFEE and the HUZzBAND.

“We were riffing on the name the night we got engaged. It’s the most special band,” James smiles. “What we have, what we have written together, sprang out of The Holiday. All the songs that are original were written at The Holiday. We can’t write anything anywhere else,” she laughs.

On Feb. 9, more than 30 musicians will gather at The Holiday to kick off the third annual Love on Holiday songwriting event by listening to songs produced during previous Love on Holiday events, eating dinner and spinning a bottle to form writing groups.

“Spinning the bottle makes sure something is happening,” says mAcdonald, who acts as a mentor throughout the week. “I might make suggestions for groups, because I know people’s strengths. I listen to the songs and give the go-ahead for songs to be recorded. I try to guide them along.”

“He’s like a mad scientist,” laughs James. “He’s a secret weapon – he’ll make suggestions that shape and change songs. I value that a lot; and he’s very adamant about not taking credit.”

mAcdonald might keep a low profile about his contribution to the crazy good and diverse music produced at The Holiday, but he’s quick to say that this is a good time to be writing music and creating art. “People reminisce about golden ages of music or art – that never really existed,” he says. “They talk about today, how it’s not quite the same. I think it’s every bit as good – art, lit, music, you name it. Maybe this is another Golden Age of something.”

Whatever this time will be remembered as, The Holiday will certainly leave their musical mark in the community and individual lives.

“It feels like family here. I moved here from LA. I now live in Sturgeon Bay, Wisconsin,” smiles James. “The Holiday is something that resonates with people’s hearts and souls.”

The Holiday Music Motel will present Love on Holiday at Third Avenue Playhouse in Sturgeon Bay at 7:30 pm on Feb. 14 & 15. Both shows will open and close with a performance by WIFEE and the HUZzBAND.

For more information or to purchase tickets, visit holidaymusicmotel.com or thirdavenueplayhouse.com.