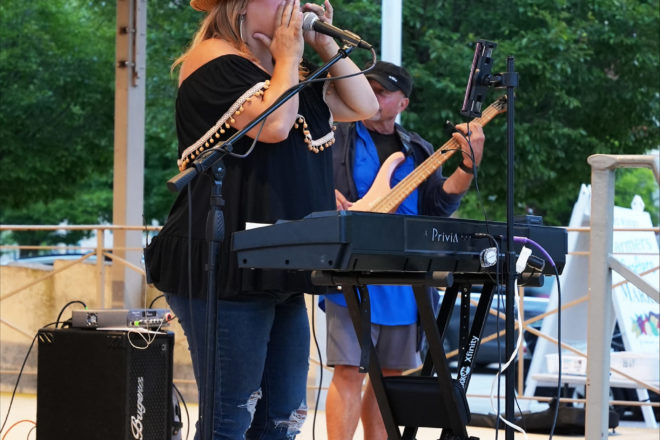 Which groups can you see and hear as you make your way along the wine trail or check out the local brewery scene? Here’s a snapshot of some of the musicians and bands that will be providing the soundtrack to your Labor Day Weekend adventures at local breweries and wineries.

Slinging tunes 5:30-8 pm, this New York City songsmith will help you kick off your holiday weekend. Grab your drink of choice, kick back around the firepit and let your cares drift away with the group’s laid-back sound, which falls in line with that of John Mayer, Jason Mraz and Train.

If you grew up on ’90s music – or your go-to playlist includes groups and artists such as Vanilla Ice, Red Hot Chili Peppers, Beck and Marilyn Mason – you’ll want to make your way to One Barrel Brewing Company to check out That 90s Band, playing 11 am – 3 pm.

Take a break after That 90s Band to explore Egg Harbor; then return at 6:30 pm to catch the LoveMonkeys. This Milwaukee-based cover band is a fan favorite courtesy of its high-energy pop/rock sound and ability to give favorite songs a fresh, new sound.

von Stiehl Winery: Out of the Blue Band

Relax on the winery’s outdoor terrace with a glass of your favorite von Stiehl wine, hard cider or craft beer as you listen to the smooth sounds of Out of the Blue Band. This crowd pleaser from Green Bay will be playing favorite tunes with its signature bluesy twist, 12:30-4 pm.

Eclectic and energizing, the sounds of Spike & April range from bluegrass to folk-rock, Ben Harper to the Violent Femmes, and The Beatles to Mavis Staples. Take in the perfect combination of laid-back vibes to toe-tappin’ tunes, 2-5 pm.

The energetic, yet easy-going music of Hunter Gatherer always seems to draw a crowd, so you’ll want to arrive a bit early to snag a picnic table before taking in the show. Playing a solid mix of Americana, classic rock, alternative country favorites and few original works, Hunter Gatherer will have you dancing and singing along, 2-5 pm.

Are you a James Taylor fan? Then the musical style of Gary Weber is for you because he and his acoustic-oriented music are best known for their ability to duplicate Taylor’s hallmark finger-picking style. Beyond that, Weber’s dynamic repertoire will also treat your ears to familiar tunes by Bob Dylan, Simon and Garfunkel, David Bowie, Jason Mraz, The Who and others. Hear him play 1-4 pm.

Simon Creek Vineyard & Winery: Chad Brecke
If classic acoustic rock is calling your name – and ears – then Chad Brecke has you covered. Mixing covers and originals from multiple genres spanning from the 1950s through the ’90s, this central-Wisconsin artist casts a wide net of appeal. Let his songs provide the soundtrack to your afternoon, 1-4:30 pm.

Return to The Cherry Hut later in the weekend, 3-6 pm, to catch musician Gerry Sloan’s blend of Celtic favorites. A mix of both traditional and contemporary tunes, Sloan’s songs and stories are a musical tour of Ireland that will have you singing, clapping and toe-tappin’ along.

Pair your wine flight with the mellow sounds of guitarist Bob Bero. Playing six and 12 strings, he covers popular tunes from the 1960s and ’70s.