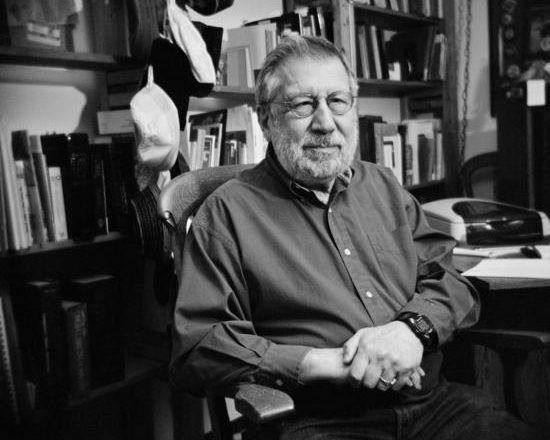 Author Fred Amram will present a reading from his memoir “We’re In America Now: A Survivor’s Stories,” in Door County in late September. Submitted photo.

Fred Amram enjoys violent sports, he reports, a twinkle in his eyes, and lists them: politics, hockey and opera.

This Holocaust survivor may have left a way of life behind him in Hanover when he escaped Nazi Germany as a six-year-old and made a new life in the United States. But he kept his good humor and found a sense of purpose.

Amram’s memoir We’re In America Now: A Survivor’s Stories came out Sept. 13. The book offers reflections on his experience as a Jewish child living under a Nazi regime, and as an immigrant arriving in this country in 1939.

During his residency at Write On, Door County, he will appear at Scandia Village in Sister Bay on Sept. 29, at the Reader’s Loft in Green Bay on Sept. 30, and at Hope Church in Sturgeon Bay on Oct. 1.

Amram, a retired professor of speech communication and creativity, was born in 1933 in a city that banned Jews from park benches and trolleys, from public schools and hospitals, and when the war began, from air-raid shelters.

“One chapter tells the story of how the Gestapo came to our home on several occasions,” Amram said. “First they came to take our radio, then to search for other things, then to clean out my father’s business, and then for my father,” who was forced into slave labor.

The anti-Semitism that began after 1933, he said, was actually genocide, “before the concentration camps. The Holocaust is not just about concentration camps.” In 1939 his family decided the time had arrived to leave the country. “One night we simply left,” he said. As Hanover is relatively close to the Netherlands, they crossed the border into Amsterdam, and succeeded in gaining permission to travel by way of Belgium to New York City.

While We’re In America Now deals with his family’s experience in Nazi Germany and the extermination of so many relatives, the memoir also reveals the immigrant experience in this country. And it is the author’s coming-of-age story as well.

“I was an outsider much of the time” during the early years in New York, Amram recalls. “I didn’t speak English, I had an accent, and a different attitude and culture.” His faith made him an outsider, too. “I was the only Jewish kid in my school.” 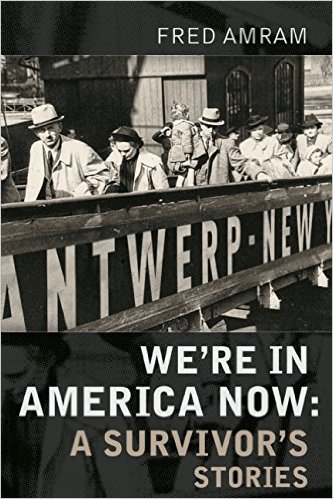 His memoir candidly recounts growing up, his sexual awakening (a first intimacy with a girl) and his developing sense of morality (a shoplifting episode) – all part of the universal experience of becoming a man.

Amram attended New York State College and graduated from Syracuse University. He entered the University of Minnesota graduate program and eventually became a professor in that school, his work taking him in many directions, including service as administrator of the school’s anti-poverty program, an interest in industrial robotics that led to consulting work, and success both as an inventor (his best, a patent, was for a backpack with removable and re-positional straps), and as a writer.

His extensive bibliography of publications includes not only his memoir but an as-told-to memoir of another Holocaust survivor, Maryla Neuman, who endured a Polish ghetto, two prisons, and two concentrations camps. “Hers was a much harsher experience than mine,” Amram said.

As a college professor he has published three academic books, many book chapters, and dozens of articles and essays. That research has led to consulting work with companies and corporations regarding communication and team-building, and to speaking engagements discussing social issues such as challenges faced by immigrants and the continuing world problem of genocide in Darfur, Rwanda, Bosnia, Cambodia, and now from ISIS and the Taliban.

Shannon Olson liked the coming-of-age aspect of the memoir, written “with honesty, warmth, and humor, and a subtlety of voice that conveys real emotional complexity – heartbreak, love, unimaginable loss, and gratitude.”

And Alejandro Baer applauds Amram’s purpose in the book, “to keep the Holocaust – not only the event in history, but also the potential for its repetition – before everyone’s eyes.”

While Fred Amram celebrated his 83rd birthday Sept. 19, he does not intend to rest on his laurels. During his residency at Write On, Door County, he will further develop the completed first draft of his next book, a novel with a cattle thief protagonist living in Germany in the late 19th century. Coincidentally, the main character is based on his grandfather, whose own father ironically was a kosher butcher.

Amram is grateful to Jerod Santek of Write On, Door County for making his visit possible to Scandia Village at 7 pm on Sept. 29; to the Reader’s Loft at 6 pm on Sept. 30; and to Hope Church at 1 pm on Oct. 1. Learn more about the author at fredamram.com.