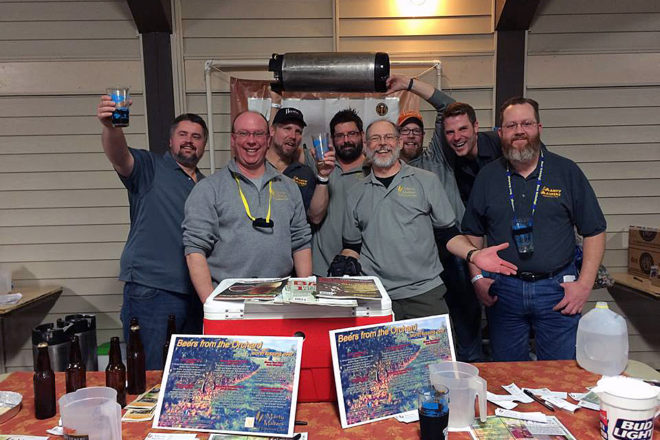 The Manty Malters Homebrew Club of Manitowoc is just one of the clubs taking part in Saturday’s homebrew event at Ahnapee Brewery in Agloma. Submitted.

Nick Calaway, owner and brewmaster of the fantastic Ahnapee Brewery in Algoma, is paying tribute to his own homebrewer roots from 1-4 pm on Saturday, Oct. 14 with the Home Brewers Showcase.

“There isn’t an event like it around here, that I know of, and felt it would give a unique opportunity to showcase local brewers,” Calaway said. “There are local beer fests that include home brewers, which is great, but we were looking to have them be the emphasis instead of being part of a bigger event. We reached out to the local home brewing clubs first and were able to get most of the participants very quickly.”

There will be members of the Green Bay Brewers Guild, Green Bay Rackers, Manitowoc Malters, along with a handful of other home brewers who are either working together or as individuals, with around 30 different brews for sampling.

The Booyah Shed will serve lunch (not just booyah) from noon to 5 pm. Due to limited space, the event will be outdoors, rain or shine.

“We’ll be awarding first, second and third place to the brews based off of peoples’ choice and we’ll also be having a silent auction for a used whiskey barrel, which will be open to the public and home brewers alike,” Calaway said.

Homebrew can’t be sold, so there is no charge to sample, but you have to pay $5 for a sampling glass.

“We’ve done a bunch of competitions before, but this is a different kind of event,” said Graig Stone of the Big Hitter Brew Club, Manitowoc. “Sure, our beer is getting judged, but I think craft beer and homebrewing is communal. You want to share. Every beer has a story. Having a showcase instead of just a competition enticed us to get involved. Add that Ahnapee makes great beer and is a fun place to visit, and it makes it even better. We’re probably as excited to share our work with others as we are to try other people’s.”