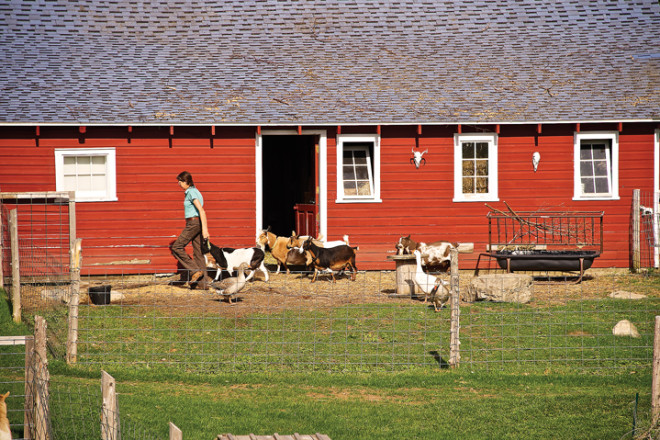 A day in artist Pamela Murphy’s life isn’t just wrapped up in canvas, paint and brushes. Instead, she starts each morning milking her Nigerian Dwarf goats, feeding her chickens, geese, rabbits, ducks and turkeys, then moves on to weeding and watering her vegetable gardens before finding time for the studio.

Murphy and her husband John are modern homesteaders. Almost everything they eat – from milk, to meat, to vegetables – comes from their 10-acre parcel in Ellison Bay.

“The whole industrial system was just kind of turning me off,” Murphy said. “It seemed so wrong to me that I just said, ‘I’m lucky enough, I’m in a situation I can make that change for myself.’” 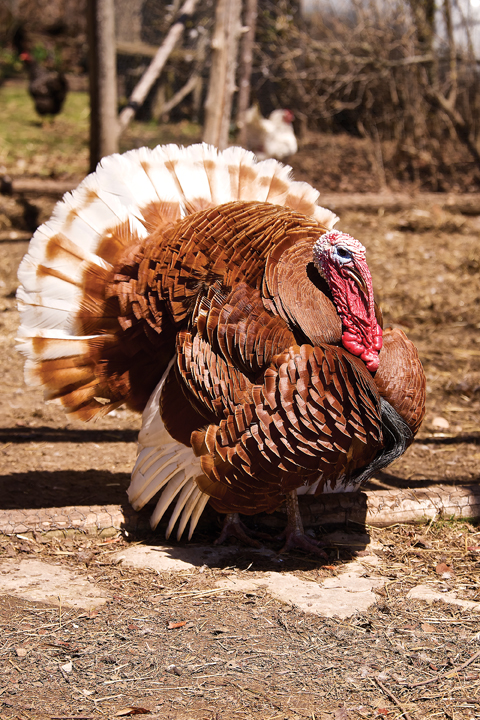 Pamela Murphy has taken her life off the grid in Ellison Bay, raising turkeys like this one, as well as goats and produce. Photo by Len Villano.

So she did. Murphy had purchased the property in 1995 and started with a small garden. Through the years she added another garden, fruit and nut trees, and a barn full of animals.

Every step has led the couple to a life where almost everything they eat, and most of what they use to clean and bathe, comes from the backyard. Every step takes her further from depending on an agricultural system focused more on productivity than quality.

“I almost didn’t want to eat anymore because it’s just so disheartening, all the pesticides and herbicides and antibiotics and the way animals are treated, what they’re fed,” Murphy said. “I’m trying to get away from that.”

It takes a lot of work to reach homesteading status – more than just caring for the livestock, vegetable gardens and orchards. Murphy also makes cheese and yogurt from her goats’ milk; cans, freezes, dries and cellars food to get through the winter; grinds the organic, whole grains she buys through a buying club in Sturgeon Bay and spends evenings with a glass of wine shelling beans by the fire.

But Murphy loves the down-to-earth, homesteading routine, even when she doesn’t leave the property for weeks. 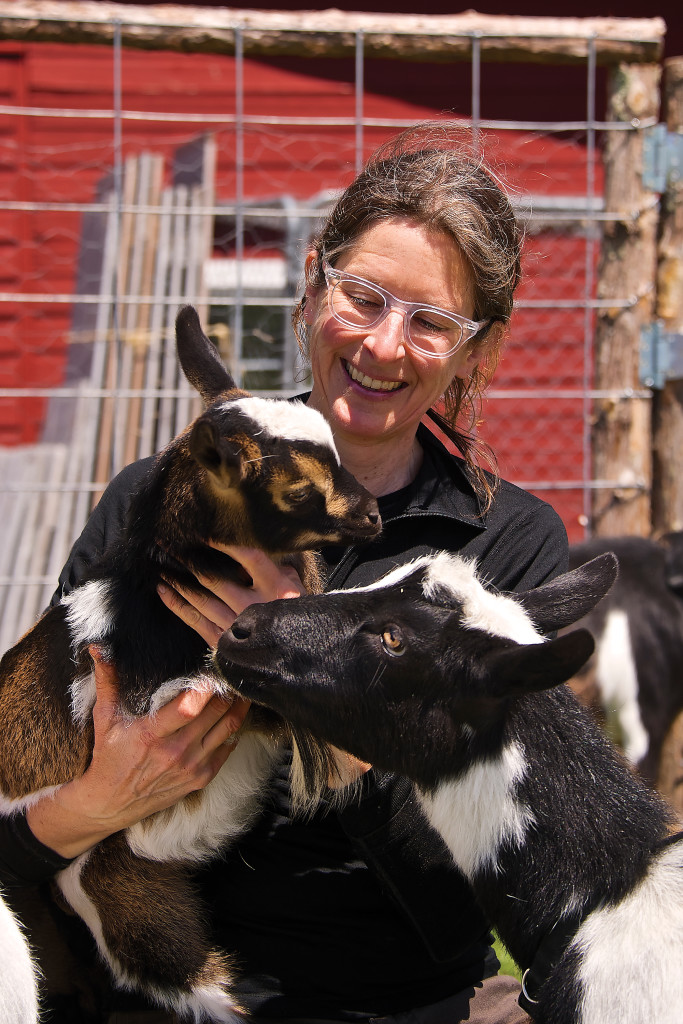 “I love doing this so much,” she said. “I love living this way so much that I regret I didn’t start sooner, but I guess you start things when the time is right. I just hope I can keep doing it for a long time into the future – it’s such an enjoyable way of life. It’s a lot of work, but just worth it. Every time we have some chèvre or yogurt or something like that, I just say ‘It’s all worth it. It’s all worth it.’”

While she’s kept small gardens and pots of herbs wherever she’s lived, the transition to homesteading was big. Learning how to raise animals and preserve food took a lot of research, and Murphy wishes she could tap into the knowledge of her grandparents’ generation for help.

“I would give anything to have started doing this while my grandfather was living,” she said. “I think so often about what I could have learned from him…I feel like I’m picking up those pieces and putting a little bit back together. Those old timers, like my grandpa, they could fix anything, make anything, make anything work, figure out how to do anything, take care of the animals. It’s amazing, the knowledge they had.”

Murphy was able to glean from her grandmother’s experience when it came to one difficult task – butchering. The first time she and John butchered chickens, her 90-year-old grandmother came up to show them how, and continued to for the next four years.

“We eat meat, and we figure that we should be willing to do the deed,” Murphy said. “It’s hard, it’s really hard, but I know these animals were humanely raised, and I know what they ate.”

Butchering may be a hard thing to stomach, and raising livestock is a big commitment, but Murphy said everyone can, and should, take small steps toward food sustainability. 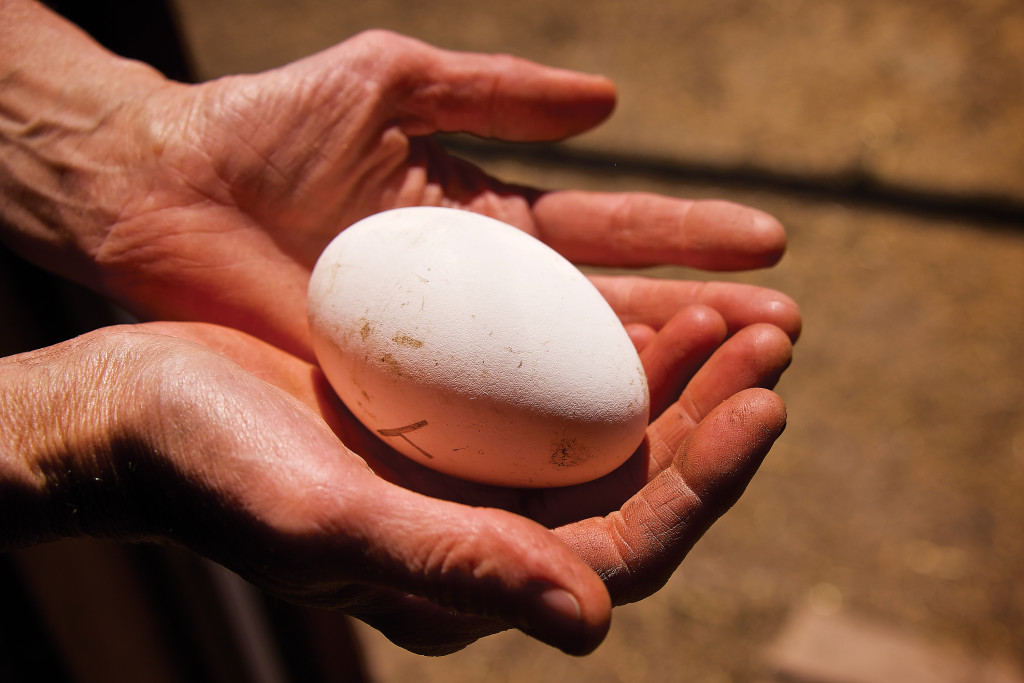 “Everybody can do something, at least on a small scale,” Pamela Murphy says. Photo by Len Villano.

And every small step puts us closer to a safer, healthier food system.

“It’s a pretty big thing to turn, but I think the whole industrial agriculture and farming system is starting to at least slow down a little bit,” Murphy said. “People are thinking more about small farms, sustainable farming, using less chemicals and pesticides, and doing things on a smaller scale and realizing that’s maybe healthier for everybody – the animals, the land, us.”