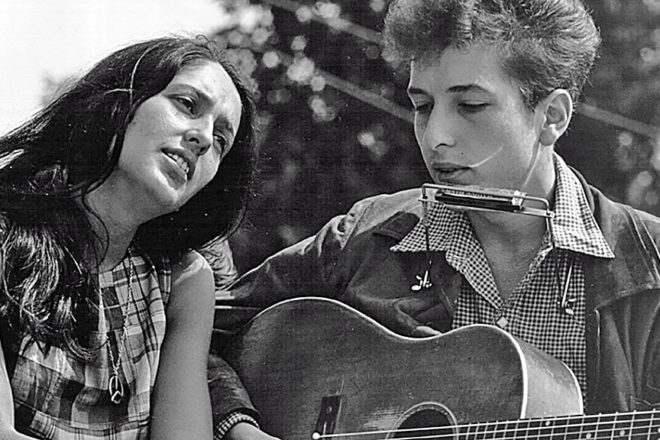 That was my first thought when I heard the news that Bob Dylan had won the Nobel Prize for Literature. All right, homie!

My second thought? I wonder if upon learning that he was being given the award, Dylan said to someone, anyone, “Yippee. I’m a poet. I know it. I hope I don’t blow it.”

As a young man in his 20s, Dylan would downplay his Minnesota background. Just a few days before the announcement of his Nobel prize, I heard a fragment of a story on NPR about a folk radio show Dylan appeared on very early in his career in which the host mentions that Dylan was born in Duluth, Minnesota, and he responds by telling a whopper, that he was born there but grew up in Taos, New Mexico, where he learned many cowboy songs. He told another folk radio host that he was born in South Dakota but ran away with a carnival and wrote a song about the elephant lady but couldn’t remember it. There are other origin stories out there.

Nevermind. This is about the poet, not the person who made a career out of recreating himself.

The former Robert Zimmerman was unleashed on the world on March 19, 1962, when Columbia released his eponymous debut record, Bob Dylan. But this was just a glimpse of what was to come. Only two Dylan originals were on this record. The rest were other people’s folk songs. 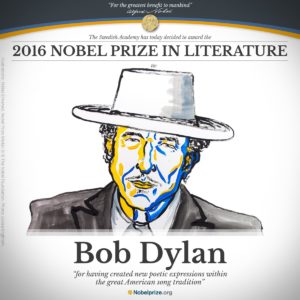 It was the next record, The Freewheelin’ Bob Dylan, that separated Dylan from the pack, with “Blowin’ in the Wind,” “Girl from the North Country,” “Masters of War,” “A Hard Rain’s A-Gonna Fall,” “Don’t Think Twice It’s All Right” and “Talkin’ World War III Blues,” to name about half of the songs on the sophomore recording.

Suddenly hip young English teachers were playing Dylan to their students, analyzing his words for meaning and proclaiming him a poet for the new age. Soon it seemed to be a national game, to understand what young Bob Dylan is telling us in these cryptic songs. Is the hard rain atomic fallout? It he referring to a marijuana high or Old Testament retribution when he sings “everybody must get stoned”?

By the time people were asking those questions, the former folksinger had achieved single-name status: When you said “Dylan,” everyone knew who you were talking about.

But the big question was, is this guy another flash-in-the-pan pop star or a for-the-ages poet? That debate continues to this day, especially with the announcement that the 75-year-old rock star is now a Nobel laureate in literature, the first songwriter in the 115-year Nobel history to win the prize.

In announcing the award, Sara Danius, permanent secretary of the Swedish Academy, said Dylan was chosen because he is “a great poet in the English-speaking tradition.”

Here are a few of my favorite lines. You be the judge.

“Starry-eyed an’ laughing as I recall when we were caught

Trapped by no track of hours for they hanged suspended

Spellbound an’ swallowed ’til the tolling ended

Tolling for the aching whose wounds cannot be nursed

For the countless confused, accused, misused, strung-out ones an’ worse

An’ for every hung-up person in the whole wide universe

An’ we gazed upon the chimes of freedom flashing.”

“From the crossroads of my doorstep

My eyes start to fade

As I turn my head back to the room

Where my love and I have laid

An’ I gaze back to the street

And I’m one too many mornings

An’ a thousand miles behind.”

Hey! Mr. Tambourine Man, play a song for me

Hey! Mr. Tambourine Man, play a song for me

In the jingle jangle morning I’ll come followin’ you.

Take me disappearin’ through the smoke rings of my mind

Down the foggy ruins of time, far past the frozen leaves

The haunted, frightened trees, out to the windy beach

Far from the twisted reach of crazy sorrow

Yes, to dance beneath the diamond sky with one hand waving free

Silhouetted by the sea, circled by the circus sands

With all memory and fate driven deep beneath the waves

Let me forget about today until tomorrow.”

“Once upon a time you dressed so fine

You threw the bums a dime in your prime, didn’t you?

You thought they were all kiddin’ you

You used to laugh about

Everybody that was hangin’ out

Now you don’t talk so loud

You don’t seem so proud

About having to be scrounging for your next meal.

How does it feel?

How does it feel to be without a home

“No, I do not feel that good when I see the heartbreaks you embrace

If I was a master thief perhaps I’d rob them

Don’t you understand, that’s not my problem?

And just for that one moment I could be you

Yes, I wish that for just one moment you could stand inside my shoes

You’d know what a drag it is to see you.”

“You will start out standing

Proud to steal her anything she sees

But you will wind up peeking through her keyhole

Down upon your knees.”

“Idiot wind, blowing every time you move your mouth,

Blowing down the back roads headin’ south.

Idiot wind, blowing every time you move your teeth,

It’s a wonder that you still know how to breathe.”

Let’s end with a Dylan rap.

“Johnny’s in the basement

Mixing up the medicine

I’m on the pavement

Thinking about the government

The man in a trench coat

Badge out, laid off

Says he’s got a bad cough

Wants to get it paid off

It’s somethin’ you did

But you’re doin’ it again

You better duck down the alleyway

Lookin’ for a new friend

A man in a coonskin cap

In a pig pen

You only got ten.”