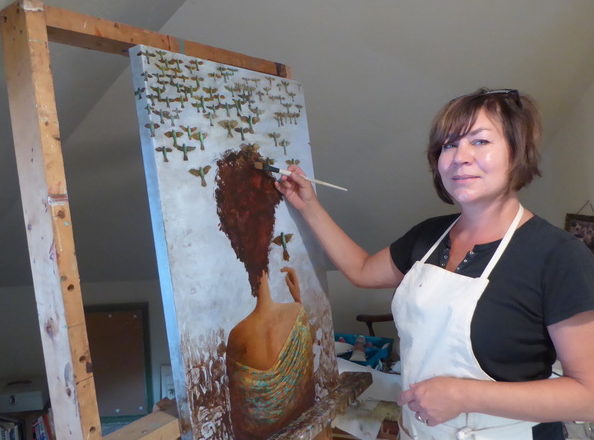 Kristy Goggio works on a painting in her attic studio. Submitted.

Kristy Goggio was protective of her coloring books as a child. “My coloring books were really nice,” the Kenosha-based artist admitted with a laugh. “My cousin was a scribbler. I would hate when she would do that to one of my coloring books. I’d turn a page and, ‘ugh.’ One year I got a bunch of coloring books and the ones I didn’t like I gave to Tammy.”

Though there was no aha moment, Goggio knew early on art would be a part of her career. She went on to graduate with a BFA from the Milwaukee Institute of Art & Design, receiving scholarships and recognition for her artwork along the way. Following graduation, she went on to own a frame shop and gallery, Arc East Art & Frames. “Back in those days, people didn’t buy pre-framed posters like they do now at big box stores. You went to a frame shop, looked through poster catalogs,” she explained. Customers would flip through the catalogs, order their favorite, and she would frame the print for them.

When Goggio closed up shop in ’99 her husband said, “You really want to be an artist. You haven’t given yourself the opportunity. Give yourself a year, see what happens.” She took her husband’s advice and submitted her work to various poster companies. Wild Apple Graphics sent her a contract.

For 14 years, Goggio created artwork for home décor items – from placemats to kitchen towels to throw rugs – sold in Bed, Bath & Beyond, Kohl’s and more. “I learned a lot about how to paint really fast,” she said. “When you’re contracted you gotta keep production going. I basically produced the same kind of image over and over and over again.”

While she worked for Wild Apple, she managed to find time and energy to explore her personal creative instincts as well. “I did want to create my own work that [Wild Apple] didn’t have their thumb on,” she said. “And then I needed a place to sell them. I started submitting to galleries.” Fine Line Designs Gallery in Ephraim, owned by Shari Gransee, was one of those galleries.

“I am very honored to be in that gallery,” said Goggio. “Fine Line is definitely in the top five galleries in Wisconsin. In the artist world, there’s a lot who want to get in there. Shari is great.”

Before her work graces the walls of Fine Line, and galleries across the country, they begin in Goggio’s attic studio. Though most paintings feature similar subjects – a woman, birds and bits of nature – each is distinct and comes together in its own, sometimes surprising, way.

“I want to let things happen,” said Goggio. “There’s this technique I do where I lay down oil paint, then lay a different color over it, a thin layer.” She then splashes the canvas with a turpentine mixture, creating circles, patterns, little surprises. “It’s always fascinating. I don’t know what will happen. I go from super, super messy then I clean it up – for me it’s much easier than starting with a white canvas.”

She usually has four to 10 paintings in various stages of completion at once. “Some are little, some are huge, some I just started, some I put away for a few weeks if I can’t figure out what to do next,” she said. “When you approach a craft that way, instead of a rigid, paint-by-number way, I think you’re being a little more honest with creativity. You start something – maybe you don’t have every thought figured out – but in the middle you learn things, things shift and change. Hopefully you discover something new.”

Goggio lets the “mess” dictate where the painting will go. “I paint a bunch of colors and then start to formulate a composition over it,” she said. “If I get a bright blue next to a bright red, that might say to me, that’s where the hat starts.”

It’s no accident that the hats of the women she paints are spilling over with poppies, pine cones, fruit, beehives and bird nests, Goggio has a degree in horticulture, keeps bees, and finds sanctuary in her own backyard garden. “It all connects for me,” she said. “I’m very interested in nature, fascinated by it.”

She calls the women she depicts in her paintings a “nod to Mother Nature,” who nurtures and shelters the life around her. Though Goggio admits that if she truly wanted to portray Mother Nature faithfully she would need to include violent, destructive representations as well. “She’s not always a nurturer,” she said. “I have sketches of the darker side of Mother Nature. I’ve shown them to gallery owners and they don’t want me to paint them. I understand that.”

When she’s not painting or collecting honey, Goggio can sometimes be found teaching painting and drawing. “I love to teach,” she said. “I love the fascination people get when they realize they’ve created something, watching people go from, ‘I can’t do that’ to ‘Wow! I did that.’” She also enjoys sharing the process. “I think a lot of people have this misnomer that artists see something and then paint it. There’s more to it – steps, little tricks. When you learn the tricks, things get easier.”