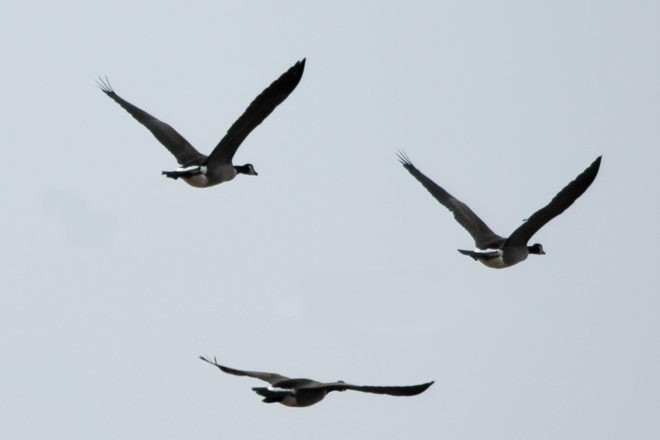 Three Canada geese in flight show the broad, white band of feathers on their rumps. Photo by Roy Lukes.

The Vs of migrating geese heading south on brisk, north winds is a sure sign of fall. One of my favorite stories is the essay about wild geese in Aldo Leopold’s famous book, A Sand County Almanac.

Leopold told of seeing the geese returning in the spring to his southern Wisconsin marshland and the wonderful “conversation” within the flock as the birds settled in for the night. His writing is educational, poetic, philosophical and comforting. I think everyone should read this book.

Near the end of the 19th century, habitat loss and overhunting brought about rapid decline in some Canada goose populations. Of the 11 races or subspecies of these well-known geese, it was the Branta canadensis maximus — the giant race — whose numbers dropped precipitously.

During the 1950s, the giant race was near extinction, but in 1962, a small flock was found wintering near Rochester, Minnesota. By 1964, a research center had been constructed in North Dakota, which eventually led to 64 breeding pairs. They were distributed to many upper-Midwestern habitats that would promote nesting and increase their population. The rest is history!

Canada geese are one of the birds that most people can easily identify. The brownish-gray body and black head and neck with the broad, white chin strap set this species apart from all other geese. The American Ornithological Union (AOU) divides the many subspecies between the Canada goose and the small cackling goose.

The cackling goose was originally considered a subspecies, but in 2004, the AOU classified it as its own species, Branta hutchinsii. Cackling geese spend the winter in the prairie states, south to the Texas Gulf and east to the southern Great Lakes and Atlantic coast. Their typical migration route is through the prairies of the central states and Canada, and they nest in the far-northern parts of Canada and Alaska.

Severe drought in the central region of the U.S. during the 1930s Dust Bowl era dried up most of the pothole lakes that waterfowl needed, resulting in a drastic decline in many duck and goose species. Eventually, federal and state governments worked to develop and improve habitat for the water birds.

The honkers’ nickname comes from their calls. They are in the large family of ducks, geese and swans, and their size ranges, through the many subspecies, from 22 to 40 inches. Geese mate for life.

The nest for the giant race is hollow, with an exterior that’s 18 to 25 inches wide and an interior that’s seven to nine inches across and four inches deep. It is built along the edges of wetlands from plant stems, twigs and grasses and is lined with down and small feathers. The giant race is solitary, but the smaller races are often colonial nesters. The giant race in Door County may be nesting as soon as the snow melts and the ice is gone from the lakes. Fledged chicks can often be seen with their parents as early as the first week of May.

They have a single brood per year, and the young are incubated for 28 days. The female does all the nest building and incubation, usually lying quite low with her neck stretched out, while the male stands guard. Clutch size is usually five or six eggs but can be up to 10.

While incubating, the female emits low calls to her eggs, and the developing young — still in the egg — call back! This is a way of imprinting the offspring. Once hatched, the adults guard the young but don’t need to feed them because the precocial chicks can feed themselves directly out of the egg.

Once they hatch, which can take 24 to 36 hours for the entire set of eggs, the young can swim along with the adults, but they cannot fly until they are about nine weeks old. The family stays together until the following spring, and the growing youngsters do not breed until their third year.

In late summer, no goose family can fly because the young have not developed their wings fully, and the adults have molted their long flight feathers. Therefore, family groups stay hidden near wetlands, and if threatened, they can dive underwater to escape.

The nesting giant-race youngsters take a “molt migration” north into Canada as yearlings in June of their second year, then return in late summer or early fall. Many of our local geese do not migrate south as the smaller races do; instead, they stay in the county and eat waste corn and other field grains throughout the winter. If the snow covers their regular feeding areas, they move as far south as necessary to find food and shelter.

A few other goose species can be seen here during migration, including the greater white-fronted goose, which breeds in far-northwestern Canada and Alaska. Its normal migration route is from northern Mexico through the central states, mainly west of the Mississippi River. A few drift into Illinois and Wisconsin, to the point that our state birding records consider them to be regular migrants. They can live to be 25 years old.

The snow goose — or white morph — is another migrant that we see here. It is pure white, with black wing tips. The blue goose is the dark-morph form of the snow goose.

My late husband, Roy, and I drove to Nebraska to see sandhill cranes in March 1995, and a side trip to a wildlife refuge allowed us to see 300,000 snow geese in one area. We saw this same species on a trip to New Mexico’s Bosque del Apache Wildlife Preserve, where a huge flock startled by hunting-season gunfire flew at treetop level right over our heads.

Snow geese suffered drastic population declines, so hunting them was discontinued in 1916. They were conserved in wildlife preserves for decades, and the hunting season resumed in 1975.

A smaller form of snow goose is the Ross’s goose, which is a bit less common in our state during migration. It has a shorter neck and tail than the snow goose and breeds in the same territories. Now that climate change is melting the ice and reducing snow cover in the Arctic, some hybridizing of the snow and Ross’s goose is taking place.

Get out to enjoy the lingering autumn days. Notice the changes in nature and the sounds of migrating geese. Be aware of what is happening to this earth — our only place to live. As Aldo Leopold said of a college-educated woman who told him she had never seen or heard a Canada goose, “Is education possibly a process of trading awareness for things of lesser worth? The goose who trades his is soon a pile of feathers.”