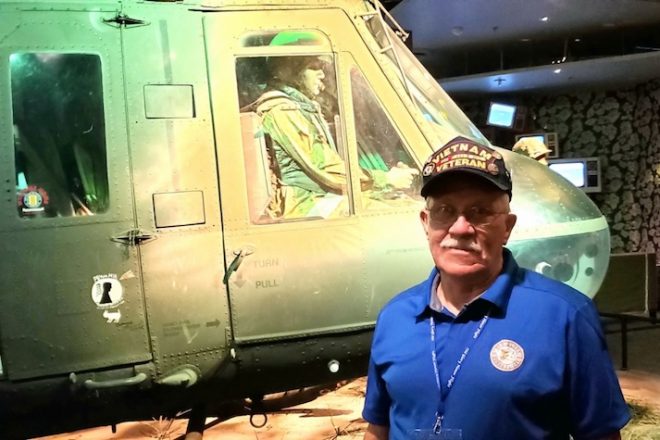 Joe Knaapen, 74, at the Vietnam War display at the National History Museum in Washington, D.C., on Aug. 31. Submitted.

Ninety-nine military veterans flew out of Appleton International Airport the morning of Aug. 31 to tour Washington, D.C.: the Capitol, White House, Vietnam Memorial, Arlington National Cemetery, Lincoln Memorial and more. We came home that same night to a greeting typically reserved for the winners of the Super Bowl.

The trip, Mission No. 54 for Old Glory Honor Flight, came in dramatic contrast to my return from Vietnam in 1970.

Through the late 1960s, the debacle and horror and duplicity of the Vietnam War totally divided the country. Protests and assassinations – Martin Luther King Jr., Bobby Kennedy – drove people into the streets. Fires blazed from Newark to Detroit to Los Angeles.

The troops coming home from Vietnam landed in the extremes. Some ran a gauntlet of curses, insults, spit and flying debris; some came home to the arms of grateful families.

I saw both, encountering hatred in Oakland but a big, happy welcome from my family at Austin Straubel Field in Green Bay. That family expression of joy and appreciation came back in spades as the highlight of my Honor Flight.

Let me paint that picture into perspective. After graduating from Sturgeon Bay High School in 1965, I gave college a try and failed miserably. The lack of studying and focus wiped out my student deferment from active military service. Without the sanctuary of higher education, I soon found myself en route to my first summer camp: Fort Campbell, Kentucky, for basic training, ground down by the Army into a cog usable for the Big Green Machine.

Next came advanced training. I had parlayed a year’s extension in uniform to delay the inevitable trip to sunny Southeast Asia by accepting a six-month course in electronics at Fort Monmouth, New Jersey. Ultimately, I earned an assignment to Vietnam. It came with a 25-hour flight, including pit stops in Alaska and Japan before landing at Tan Son Nhut airport in Saigon (now they call it Ho Chi Minh City). I stepped off the plane into a stifling atmosphere of heat and humidity. I could barely breathe and nearly stopped smoking (an addiction I didn’t beat for 25 years).

With the heat came an assault on my senses. The smells: diesel fuel, human and animal waste, dead fish, garbage. The noise: the distinctive whoomp-whoomp of helicopters, the roar of machinery, explosions (better learn the difference between incoming and outgoing), small-arms fire, sirens, alarms. The sights: diminutive native people speaking in squeaks and clicks, dressed in strange (to Westerners) garb, surrounded by pagodas, tropical foliage and “white mice” (the white-shirted South Vietnamese who manned sand-bagged bunkers in every city).

For 22 months, I served in the 369th Signal Battalion, later Long Lines South, 1st Signal Brigade, helping to operate the most sophisticated communications of its time: microwave relay stations linking field commands via satellite and ocean cables to high command in Hawaii, the Pentagon and the White House.

From the hills of Vung Tau, I could see the South China Sea; in Bien Hoa, my Army detachment was dwarfed by the surrounding Air Force base, the biggest and busiest airport in the world; in a Jeep, I escorted the paymaster from Long Binh to Cu Chi.

About 2.7 million men and 11,000 women served in Vietnam from 1957 to 1975. Each of us saw a different war. Some got dirtier, some closer to the tip of the spear. Sometime in the 1990s, I was whining to Tim Lawrie, a retired Army colonel, that I hadn’t been much of a soldier. Lawrie, a Sturgeon Bay native who earned Purple Hearts and other honors during a career that culminated in helping Gen. Colin Powel plan the Desert Storm invasion of Iraq, interrupted my pity party.

“You were needed, or you wouldn’t have been there,” Lawrie said. “We are not murderers or baby rapers. We are warriors, an honorable profession, called to duty when diplomacy fails.”

More than 58,000 of those warriors are named on The Wall, the Vietnam War Memorial in D.C. During the Honor Flight, I carried out the ritual appreciation of their sacrifice by tracing the names of Door County men who gave their all: Dan L. Pfister, Randall W. Wagner, David R. Schaefer, Richard E. Perez, and my high school classmate Philip M. Overbeck.

My closest companion on the Honor Flight, Ed Janz, a retired police officer from De Pere; and our guardian, Steve Riske, a security guard from Manitowoc, helped me do the tracings.

Throughout our day, the three of us, like others on the flight, swapped stories, ideas, memories, opinions and a lot of laughs. Me and Janz, a Navy veteran with great stories about Guam, spent most of the day teasing Riske about how we might break the cardinal rule of the tour by setting off on our own. We kidded about renting a motorized scooter to roar off on an unguided adventure, or take Plan B to slip into the subway on our own adventure. We never did, but the running joke helped us build a bridge.

I am not a hero, but I felt like one when, at the end of a very busy day, we walked into the terminal at Appleton to be engulfed by flag-waving pageantry, cheers and the hugs of family, friends, members of military groups (Veterans of Foreign Wars, American Legion and Patriot Guard, among them), and people connected with the sponsors of Honor Flight.

To me, the beauty of Honor Flight was how the plane ride to D.C. and the hoopla of a well-run sightseeing tour set up the homecoming: a cathartic welcome back to the arms of a grateful community. It’s enough to make a grown man cry.