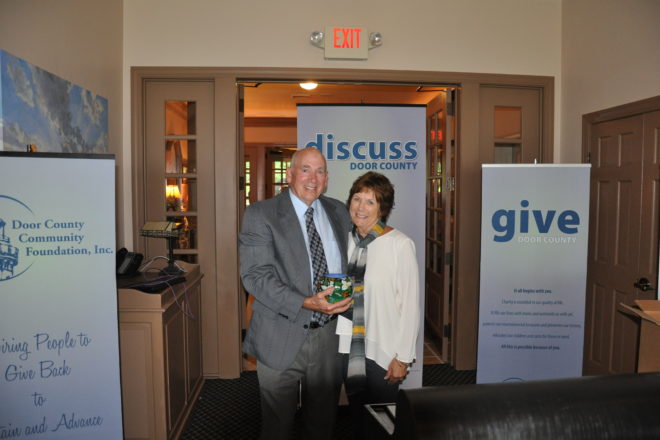 John Herlache was named the Door County Community Foundation’s Philanthropist of the Year on June 28 at the annual Celebration of Giving at Horseshoe Bay. With John is his wife, Nell. Submitted.

A couple of years ago my wife broke her toe. While painful, what was surprising to us is how much a broken toe impacted the other parts of her body. Apparently after the break she started to walk a little differently. She put more weight on the left side of her body to compensate for the pain she felt in her right foot. The doctor told us that likely caused her to lean slightly to one side, thereby twisting her spine ever so gently as she moved about. Eventually, that difference in her posture caused a pain in her neck.

I was fascinated how a break in one part of the body could lead to a cascade of events and eventually cause pain in a completely different and totally healthy part of the body. It reminded me that although a body is comprised of all these individual pieces, they are ultimately parts of a single, connected and interdependent system. When one part of our body is compromised, it has the potential to make the whole more vulnerable.

I told this story recently at the Door County Community Foundation’s annual Celebration of Giving during which John Herlache was honored as the 2017 Philanthropist of the Year. John’s leadership and volunteerism includes service at the YMCA, Peninsula Players, Neighbor-to-Neighbor, the Rotary Club of Sturgeon Bay, the Belgian Heritage Center, and many others. He is responsible for the creation of Door County’s paramedic program, the first one of its type in rural America. John is one of the founders of Door-Tran and helped develop the current public transit shared-ride taxi system in Door County. He is also one of the original signatories on the founding documents of the Door County Community Foundation, Inc.

There’s a particular arts organization that I’ve see John Herlache and his wife Nell give to several times over the years. I also know from other conversations I’ve had with them that they don’t attend performances of this organization nor do they have a strong connection to anyone involved with this charity. So I asked John why he chooses to give to an arts charity that he doesn’t even particularly like.

He said that this arts organization brings a lot of tourists here every season. By supporting them he’s helping to create jobs in the county and that helps keep the whole community strong.

This tells you all you need to know about John Herlache. Maybe it’s his years as a doctor, or perhaps he learned it from his parents, or maybe it’s just who he is, but John intuitively knows that when the individual parts of our county are healthy, our community as a whole is stronger.

I was recently reading a commencement address given in 1991 by the late John W. Gardner. Gardner was a lifelong Republican and the only Republican in the cabinet of President Lyndon Johnson.

Gardner had a reputation a little like John’s. Both men have political opinions that are, shall we say, clearly defined. Yet both men have also shown a willingness to work with anyone, on either side of the political aisle, if doing so meant getting things done.

Gardner’s commencement address of more than 25 years ago is particularly well known for a famous line that I’d like to talk about, but I want to do so by breaking his idea into two phrases.

In the first part, Gardner said, “I count it as one of the marks of maturity that men and women nurture the institutions that nurtured them…”

That is a lesson John Herlache teaches us every day. His passion and commitment to this place called Door manifests itself in virtually all that he does. John was born here and was nurtured by this community from the very start. There are few people who have worked more tirelessly for Door County, on a broader range of issues, than John. He has been nurturing this place that nurtured him from his very first years.

Yet regardless of where we were born, have not all of us been nurtured by our beloved peninsula? Perhaps we came here as young adults, discovered it for the first time as middle-aged tourists, or maybe we chose to retire to this community. Regardless of when it is in our lives that we arrived, are we not all inspired by the natural beauty that surrounds us? Has not this place nurtured the artist within many of us? I even know numerous people who say that Door County is where their entrepreneurial spirit was allowed to flourish and thrive. Even if we were not born here, we’ve all been nurtured by this place. Like John, it is incumbent upon each of us to care for it.

Let’s continue to the second phrase in Gardner’s famous line. He said, “I count it as one of the marks of maturity that men and women nurture the institutions that nurtured them… not uncritically but lovingly, not to preserve them unchanged but to renew them as the times require.”

Our obligation to this place we love is not to blindly preserve it under glass, trying to keep it forever unchanged. Rather, we are called upon to use our minds, to cast a critical eye on the realities of the everchanging world that surrounds us.

I’ve never known John Herlache to fail to confront a difficult truth about the place he loves. He honors and cherishes our past, but uses it as a foundation upon which to build a new and brighter future. To truly nurture this place that has nurtured us requires us to lovingly foster its renewal and rejuvenation as the times require.

Later in that same speech Gardner says, “The commitments that people make to values beyond the self are manifested in various ways – in their family and community life, in the way they treat any and all humans, in the goals and standards they set for themselves. There are men and women who make the world better just by being the kind of people they are. They have the gift of kindness or courage or loyalty or integrity. It really matters very little whether they are behind the wheel of a truck, or running a business, or bringing up a family. They teach the truth by living it.”

This is the essence of John Herlache. In so many deep, profound, and admittedly, sometimes his quirky own way, John’s love for Door County knows no bounds.