Homebrewers take note – it’s a bumper year for Wisconsin hops and they are being picked now. If you want to produce a wet-hopped brew with just-picked hops, it’s hops time!

It’s a beautiful early September morning. The sun is shining. A soft wind is blowing. And Jeanne Majeski is picking hops for her business, Door Peninsula Hops.

Four varieties – Cascade, Chinook, Mt. Hood and Magnum – are growing on a hillside on the Majeski property a short way off Highway 57. 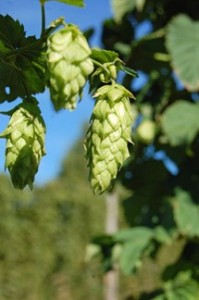 “The hill was always a problem,” Jeanne said. “We wanted to grow something out there. We were researching specialty crops. Then I read about the resurgence of growing hops in Wisconsin. That was really interesting to me. I never knew that Wisconsin was a big hop-growing area, but it should be with all the breweries there were in Milwaukee.”

About 150 years ago, Wisconsin was No. 1 in hop-growing in the nation, but that’s mostly because the previous No. 1 hop-growing region, New York, had some sort of crop failure (believed to be aphid infestation) that took them a while to overcome. Wisconsin’s dominance lasted a decade.

Jeanne, who some may know as the Baileys Harbor librarian, brews beer. She and husband Joe, who retired at the end of the last school year after 24 years as principal of Sevastopol Elementary School, knew they had a great spot on their 17 acres to at least experiment with hops and see how they do. They have horses, sheep and chickens to feed the nutrient-sucking hops. Joe added drip hoses for irrigation if necessary, and the crop was planted on a southern exposure hillside that provides necessary drainage (hops don’t like to be wet). And they’re almost on the 45th parallel, halfway point between the equator and the North Pole, as is Oregon’s famous hop-growing region, the Willamette Valley.

“It was an experiment,” Joe said. “Could they grow well here and could we produce a really good hop here? I think we found that out.”

This was only the third season of growing hops. When Jeanne started the project in 2010, she first planted 32 Cascade hops rhizomes in planters indoors and then transplanted the plants to the hillside spot where 10-foot poles were erected for the hops to climb.

“They took off and they grew really well.”

“They can grow six inches a day. They grow by day and wind at night,” Joe said.

First year they got six pounds from 32 Cascade rhizomes. The second year, they added 32 Chinook, Mt. Hood and Magnum varieties and had 48 pounds of hops at the end of the season. Last year – which included a dry spell and an aphid infestation that Joe finally ended with a power wash – they harvested 52 pounds.

“This year we estimate 75 pounds,” Jeanne said, but adds that it could go higher because their projection of six pounds for their latest varietal, Magnum, turned out to be double that.

So, now that they know the experiment is a success, finding enough people who want to use their hops is the next step.

“We put the word out to homebrewers and went to the (Door County) beer festival. We’re trying to get the word out to small breweries to see if there’s an interest,” Jeanne said. “The response isn’t what I had hoped, but I also need to do more marketing. I enjoy growing. I enjoy picking and drying. I enjoy talking about it. But I’m not a business person.”

Well, brewers, the hops are ready now for wet hopping. 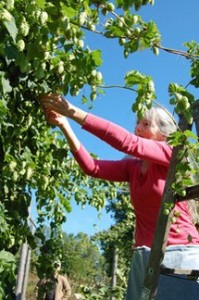 “I don’t know if there are a lot of people who do it here, but I know it’s popular out in Colorado where my daughter is,” Jeanne said.

Because hops do have such a short window of freshness, Jeanne also dries them for regular dry hopping.

“We dry them and package them and put them in the freezer, so they keep very well for at least a year, so whenever anybody calls, I would have them,” Jeanne said.

Ultimately, Jeanne said it would it be nice to see an all-Door County autumn fest beer produced with local barley and hops.

And in order to help the project along, the Majeskis are visiting Willamette Valley later this month to visit some large-scale hop-growing operations to see how they do things. They already know of two others in Door County who are experimenting with growing hops.

Who knows, Joe says, maybe one day in the not-too-distant future there will be a Door County hop exchange like Gorst Valley in Black Earth and the relatively new Wisconsin Hop Exchange.