The public may soon get regular access to the second-longest natural cave in Wisconsin.

Door County Parks Director George Pinney hopes to complete an agreement for access to the cave at Horseshoe Bay by the end of the year. Longtime Sturgeon Bay cave explorer Gary Soule is excited that the cave is finally on the verge of coming into the public domain. 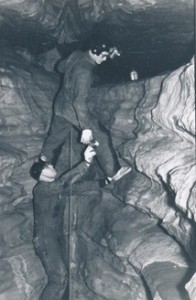 Early cavers climbing in the Wall Room to the upper level of the cave. Photo contributed.

“It’s a state-wide treasure,” said Soule, a member of the Wisconsin Speleological Society, an organization dedicated to exploring and mapping Wisconsin’s caves. “We’re very appreciative of what the parks department is doing. It’s a wonderful opportunity for tourists and for students to study geology and groundwater.”

The county already owns the field in front of the caves across from Murphy Park. That field is used for parking for the Door County Triathlon each July. The Door County Board of Supervisors agreed to forgive delinquent tax debt owed by Horseshoe Bay Golf Course in exchange for the land that includes the cave entrance in July of 2010.

The county is now working to secure underground rights to the cave, which stretches far beneath the Horseshoe Bay property.

The cave has been explored as far back as 3,103 feet, and to get that far and back takes about 13 hours. Soule believes the cave goes back substantially farther.

Soule and Pinney hope to see the caves open to guided public tours eventually. That will require some excavation and further exploration. Only two caves have been developed into show caves in northeastern Wisconsin, the Ledgeview Nature Center in Calumet County and the Maribel Caves in Manitowoc County. Of the state’s 400 caves, just seven are open as show caves.

“We would want to excavate enough loose soil that people could reasonably walk back to the wall room, about 300 feet into the cave,” Soule said.

The cave, which has been mapped by the Wisconsin Speleological Society, includes the largest known cave chamber in eastern Wisconsin, with a 50-foot ceiling. Beyond the chamber is a 45-foot underground waterfall.

The cave was discovered in the late 1800s when someone spotted water emerging from the bluff. A bit of excavation revealed the entrance to the cave about 10 feet up the bluff side, Soule said. 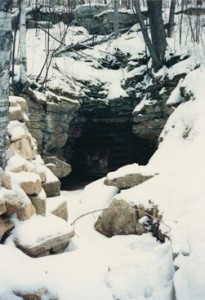 The entrance to the Horseshoe Bay cave.

Local lore is littered with speculation about the cave. Stories about gangsters escaping feds during prohibition through the caves or Native Americans hiding in the caves are unsubstantiated, Soule said.

He also said that the cave does not stretch all the way across the peninsula to Lake Michigan, as many claim.

The cave has been gated since 1986, but Pinney and Soule said it will be safe for guided public exploration.

“It’s not like a man-made mining cave,” Soule said. “As a natural cave in the Niagara Escarpment it’s really solid.”

Bob Bultman, an outreach educator with the Niagara Escarpment Resource Network, sees great educational potential in exposing the public to the cave and the karst topography of the peninsula. 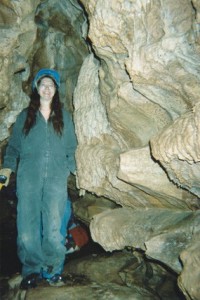 Mary Green of Sturgeon Bay next to the calcite formations in the Rocky Mountain Room of the Horseshoe Bay Cave, about midway through what could be the public access area of the cave.

“Hopefully it gives us a chance to share the experience with people and do some educating about Door County and our groundwater,” he said. “We need to realize that this is where our drinking water comes from, and being down there shows you why what we do on the surface impacts the quality of the water we drink.”

The cave is also home to a substantial bat habitat. Bultman said over 1,000 bats hibernate in the cave, including all four species present in Wisconsin.

White nose syndrome (WNS) has been ravaging bat populations on the East Coast, Bultman said, but the disease that has killed at least 1 million brown bats has not yet reached Wisconsin.

“We need to monitor the bats further and create a management plan,” he said. “That’s one of the largest hibernation spots in the state.”

White nose syndrome was found in New York state in 2006. It’s cause is unknown, according to the U.S. Fish and Wildlife Service website.

• The average temperature is 46 degrees Fahrenheit

• Relative humidity inside is 90 percent

• The cave winds through Niagara dolomite and includes flowstone, crude stalagmites, and columns of calcite

• Several domes in the cave have ceilings about 30 feet high, with one room about 50 feet tall

• At one point the cave is 129 feet underground

Gary Soule is always up for a caving adventure. If you have a cave on your property he says the Wisconsin Speleological Society is happy to take a look and will map it for free. He can be reached at 920.743.6488, or you can visit http://www.caves.org/grotto/wss.