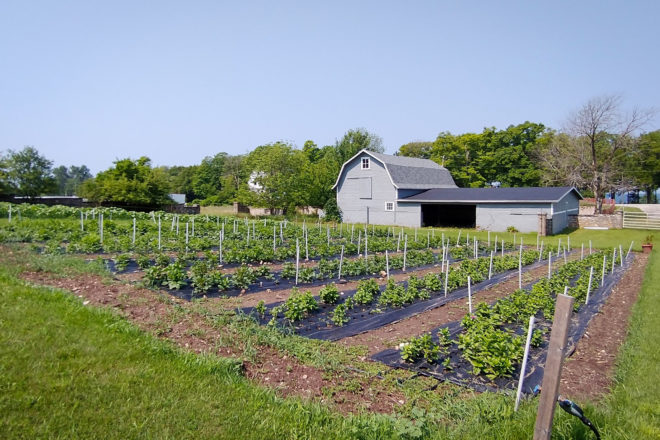 Door County Dahlias will offer freshly cut flowers from their dahlia garden on the property. Photo by Jessica Gatzow.

Nestled below the Niagara Escarpment and overlooking Horseshoe Bay just east of Horseshoe Bay Road, farm structures painted in a rare combination of gray and white were already shining examples of historical innovation. Now, even more ambitious plans await the century-plus-old farmstead, which transitioned to a nonprofit in 2018.

Horseshoe Bay Farms is the largest intact farm complex in Wisconsin, with 11 of its 16 original farm structures still remaining. Executive Director Drew Richmond opened a recent Thursday-morning tour with a warning: “I tell folks this is an exhausting hike. Not because of the mileage that we put on, but because of the time travel.”

Sure enough, Richmond led us into the bull barn and began the tour all the way back in 1912, when the Murphy family of Green Bay purchased the property, which officially became a farm in 1917. He pointed out some of the barn’s distinctive features: the wooden blocks that lined the floor because they were softer for animals to walk on and easy to replace, and a modern ventilation system that cleared the air of methane gases.

Five minutes later, the time machine brought us back to 2021 as Richmond described the nonprofit’s vision for the property to become a comprehensive community center within the next 20 years or so. Ideas include incorporating a welcome center, classrooms, greenhouses, gardens and orchards. The nonprofit also hopes to take part in a project to construct a trail connecting Egg Harbor Beach with Frank E. Murphy Park.

During the next stop in the horse barn, we were back in 1917, and Richmond described the revolutionary technology of Horseshoe Bay Farms: Every barn was equipped with running water pumped in from the bay, as well as diesel-engine generators for electricity – both uncommon amenities for farms of the early 1900s. The floor of each horse stall was worn with indentations, making it clear more than 100 years later that animals had once stood there.

Even the manure shed had its share of innovation for the 1920s: A rail system transported a bucket through the cow, bull and calf barns, then back to the shed. Richmond sees special potential for this barn: “Our vision is to have it as a classroom space,” he said, “because if you’re an eight-year-old kid and you go out to the farm and have a class, where do you want to have it?”

Because these initial tours are taking place before the major restoration and renovation, the atmosphere was casual. History lovers compared and contrasted aspects of Horseshoe Bay Farms with other farms they’d toured. And because there’s no large collection of historical material detailing the farm’s history – Richmond is still searching for photographs and documents that could reveal more details – tour guests shared ideas about how to explain features of the farm that seemed unclear. Richmond is also still waiting to open a safe from the farm manager’s home.

“I have a top-five list of things that might be in that safe,” he said. “Any guesses today?”

Richmond and a team of volunteers have begun gardening on the property. The tour group passed raised beds of vegetable plants and rows of flowers managed by Door County Dahlias. During the Saturday tours, Richmond sets up a farmstand to sell the week’s harvest, which should include freshly cut flowers within the next few weeks. Ten volunteers currently clean, garden and facilitate tours, and Richmond always welcomes more help.

As we continued walking through the property, he and the visitors tossed around additional ideas for bringing the 8.5-acre property to life. One patch of wild plants has great potential for a pollinator garden, and music and pop-up food offerings would work well in the open space beyond the massive farm structure. Because Horseshoe Bay Farm’s animal operations were relatively short-lived and transitioned to orchards in 1925, Richmond especially hopes to reintroduce fruit trees.

Near the edge of the property in one of the garages, two antique vehicles sat tucked away: a 1927 Seagrave fire truck and a 1964 orchard truck with “Horseshoe Bay Farms” written across the side. Toward the road, a 1,000-pound wagon scale was likely the site of farmers weighing cattle and other farm exports.

We ended the tour inside the colossal main barn, looking up at the place above where hay was once stored.

Richmond schedules tours several times per week, but he also welcomes occasional drop-in and self-guided tours as well. In the middle of our tour, he welcomed two additional guests who had stopped by during their drive home. For now, Richmond said Horseshoe Bay Farms is open to the public whenever the barn door is open.