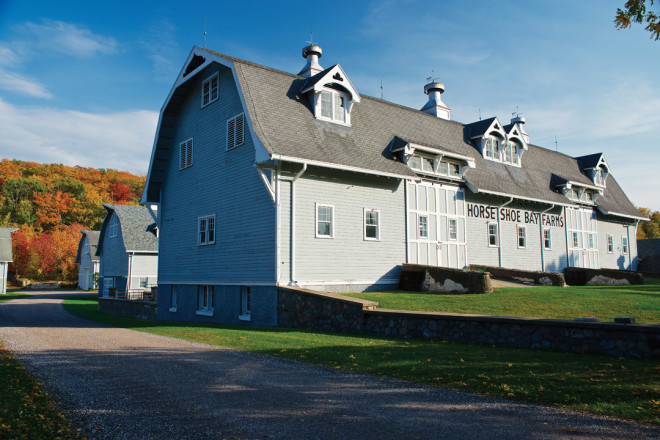 On April 6, 1946, new father Charles Richard stopped into George LeMere’s Egg Harbor barbershop looking for a haircut and a lead on a job. “Al Erickson’s hiring down at Horseshoe Bay Farms,” LeMere told him. Charles drove down Horseshoe Bay Road to the farm, found Mr. Erickson, and was promptly offered a job. “Can you start today?” Erickson asked.

Richard said he could, and he never left. He started as a worker, moved into a house on the farm, and eventually was named the farm manager, becoming one of thousands of people whose lives were touched by the iconic farm with a checkered history.

Horseshoe Bay Farms was never supposed to be a farm at all. In 1914 United Fruit Growers, led by Elbridge Murphy, began buying land along the shore north of what is now Frank Murphy County Park, a few miles south of the Village of Egg Harbor.

The vision, shared by Elbridge’s uncle Frank Murphy, was for an unparalleled resort community on the site. A 75-acre start eventually grew to 700 acres and 8,000 shore feet, and the intent was to build a hotel and break up the land into 50-foot lots. That plan gained little traction, and plans shifted toward Frank Murphy’s grand vision of building a country club and elite golf course on the land. 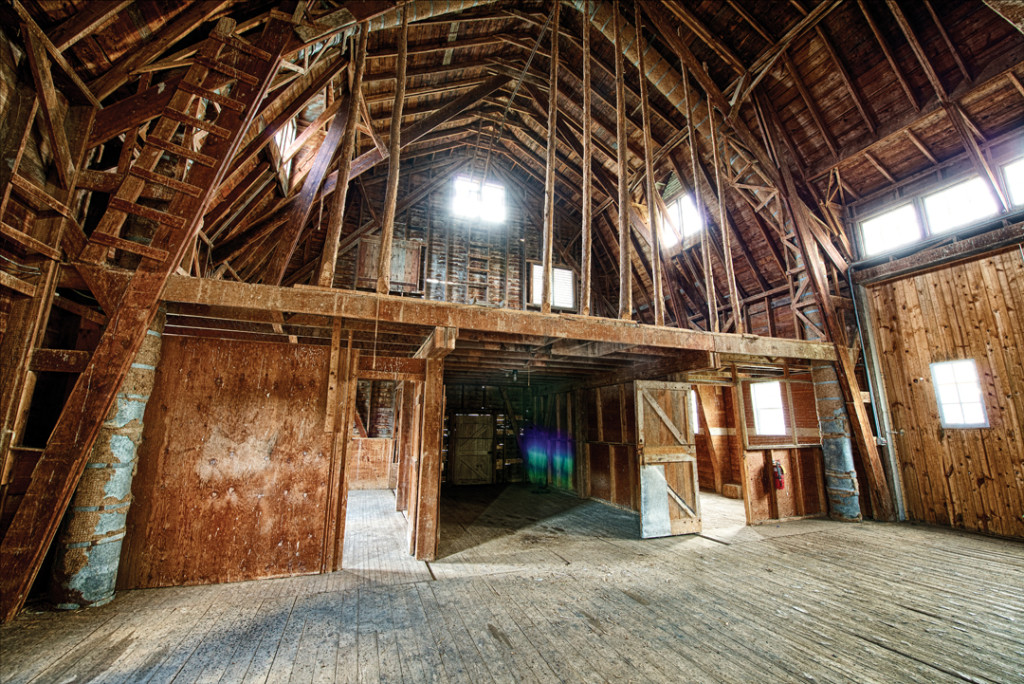 Inside the mammoth barn at Horseshoe Bay Farm. Photo by Len Villano.

A clubhouse was built and some homes developed, but the golf course idea was stuck in the mud. With no cash coming in and the investors sitting on a lot of land, the Murphys began building a dairy farm to generate revenue from the enormous holdings they had acquired. As the developments languished, the United Fruit Growers investors lost interest, and they sold their share of the property to Elbridge and Frank Murphy, who named it Murphy Farms.

Elbridge ensured that this would not be the average dairy farm. Over three years an enormous, state-of-the art facility was constructed, and driven by the expertise of Russ Bieri, the farm would become the premier breeder of purebred Holstein cows in the country and the pride of Egg Harbor and the county.

George Evenson, a Door County historian and the peninsula’s resident expert on its agricultural history, said Horseshoe Bay Farms’ impact on the peninsula and on Wisconsin dairy farming cannot be overstated.

“The founders wanted a farm that represented the best technology of the day,” Evenson said. “It was a forerunner of a lot of methods that changed the industry.”

Elbridge set out to develop a better strain of milk animals by selecting the best sires in the world. At about the same time that the farm was getting off the ground a new test was developed to determine the amount of butterfat in milk, and Bieri used that to determine which cow was the best producer.

“They were the first to use that to improve the genetics of a dairy cow,” Evenson said. That breeding evolution continues today as farmers strive to squeeze the most milk out of each animal.

Horseshoe Bay Farm circa 1920s. The farm was once the largest employer in Door County.

The farm was known for more than its breeding, however. It used a trolley system to move manure, one similar to those just now being installed in many dairy farms today. At a time when roads were little more than dirt and electricity was not yet available in much of rural America, the farm provided its own power, water, and had its own sewer system. It even had a veterinary hospital onsite.

In 1925 one of its cows, Aurora Homestead Badger, became the first cow to produce 30,000 pounds of milk in a year. But that same year the farm’s fortunes turned. In 1924 the Murphys purchased the largest cow in the world, Wisconsin Forbes the 5th, for $6,500. In 1925 the cow contracted Brucellosis, or Bangs disease – a disease that is spread through breeding, causing the cow to abort its pregnancy and infect any milk it produced.

At the time of the outbreak the farm had an estimated value of $750,000, but the spread of Bangs disease crushed the operation. The healthy cows were separated and sold at auction. The infected cows were killed, and one of the state’s most innovative breeding operations shut down for good.

Elbridge was through with the farm and sold his holdings to Frank after the dairy herd was liquidated.

Frank renamed the farm Horseshoe Bay Farms and turned it into an orchard-only operation. This incarnation would have an even greater impact on the peninsula, one that becomes strikingly apparent as one pages through the two-volume collection of family histories, Celebrating Egg Harbor, compiled by the Egg Harbor Historical Society in 2011.

A reference to a father, an uncle, a wife, or a sister who worked at Horseshoe Bay Farms appears in dozens of those family histories.

“You talk to someone in the Egg Harbor area,” Evenson said, “and inevitably you’ll talk to somebody who says ‘yeah, my father worked there’ or ‘my uncle worked there.’ It touched a lot of people.”

At its peak Horseshoe Bay Farms was the largest seasonal employer in Door County and claimed 1,200 acres of some of the most beautiful land in Door County.

Generations of local boys and girls claim cherry picking at Horseshoe Bay Farms as their first summer job, as do many summer visitors. Over time it became a rite of passage, a sort of authentic claim to a quintessential Door County experience.

None were impacted as much as the two families that managed the farm, first the Ericksons, then the Richard. Alric “Al” Erickson took the reigns in 1920, leading the farm until handing his duties down to his son Howard Erickson in 1969.

“Al and his family were great to us,” Richard recalled. “They were incredible people.”

Richard and his wife Genevieve, whom he met when she came to Door County to pick cherries in 1944, raised seven children on the farm, where they lived. “It was a beautiful place to raise a family,” Richard said. His children spent their days fishing from the pier, riding horses at the farm, and swimming at the beach at Frank Murphy County Park. By then, Frank Murphy had passed away, and he left the property to his daughter Emily Harris Cowles and her husband, Dr. Robert Cowles of Green Bay. Dr. Cowles considered the property his sanctuary, visiting often and hosting guests such as Bob Hope, Vince Lombardi, and many Packers players who worked as camp counselors for the summer cherry pickers.

The Cherry Camp, as it was called, hosted more than 100 young boys each summer who came to pick cherries for three weeks in the days before shakers mechanized the process. The pickers paid $1.50 for room and board and had to pick 64 pails a day. The long summer days in the orchard ended with swimming and a ceremony at the flagpole, where “Taps” was played each night as the flag was lowered.

Decades later many of those former pickers would pull up to the farm to see Richard, this time with family in tow. “They would want to show their kids, or their grandkids, where they worked,” Richard said. “So we would often bring them out and let them pick a pail with the kids. People felt a connection there.”

The farm when it was fully operational and one of the state’s largest.

When Glenn Timmerman bought the property in 2007, along with Horseshoe Bay Golf Club, he soon found himself immersed in uncovering its history. It didn’t take long for him to recognize the special hold the farm had on those it touched.

“Every one of the people I talked to loved that property and loved that farm,” Timmerman said.

He spent two years researching the history of the property, culminating in its placement on the National Registry of Historic Places in 2011 in recognition of its architectural and cultural significance.

Since the sprawling farm was completed in just three years it features a rare unity of design and plan that demonstrates the Murphys’ progressive approach to dairy farming. Because it was so well built, the structures still display a high degree of integrity and collectively represent the largest intact farm complex of its kind in Wisconsin.

“I wanted to establish credibility that I want to preserve the barns,” Timmerman said of earning the designation. “It’s a first step in getting a plan together for them to be used and enjoyed.”

As America’s barns crumbled or burned the barns at Horseshoe Bay only seemed to grow larger, more sturdy, and more iconic. The words “Horseshoe Bay Farms, Est. 1917” are emblazoned in proud black block lettering on the face of the barn, set back amidst the bluff and sprawling cornfields that only ad to the barn’s grandeur.

Dr. Cowles and his son Frank Cowles took great pride in the barns, Richard said, so when it came time to replace a roof or ad a coat of paint, they made sure the barns were maintained.

They took a lot of pride in their managers, too. When Al Erickson retired, Dr. Cowles gave him a slice of land on the shore, which later became The Shallows Resort, which remains in the family to this day.

In August of 2011 the Egg Harbor Historical Society made plans for the 150th anniversary celebration of the community. They chose to host it at the barns of Horseshoe Bay, and Timmerman generously opened the grounds. An estimated 750 people or more showed up to take tours of the property that for so long had provoked awe but been shrouded in a bit of mystery. 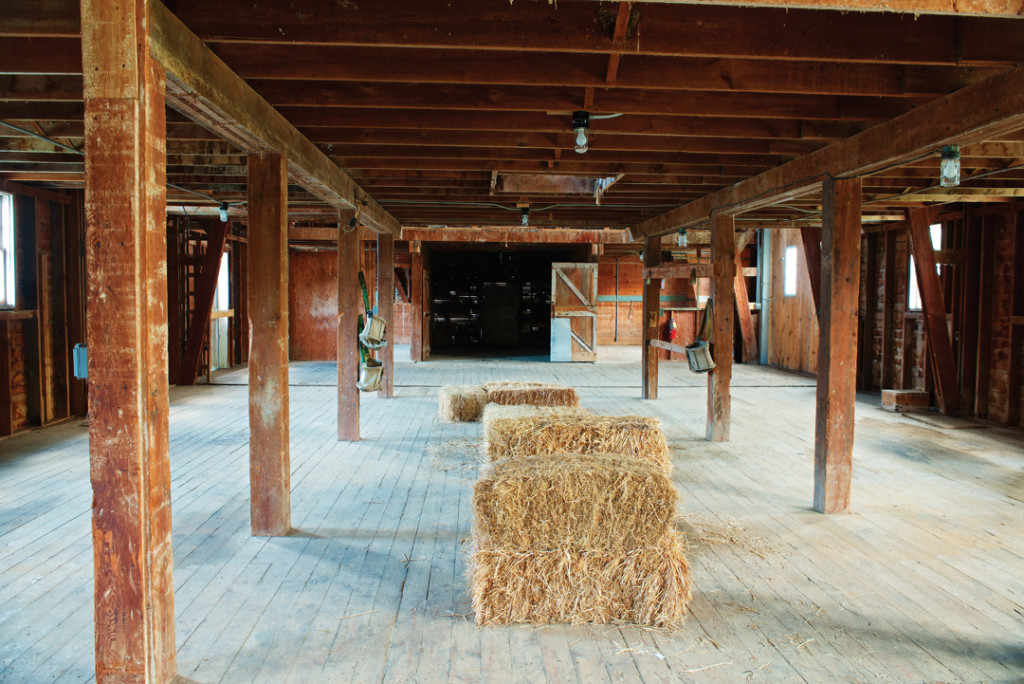 A look inside the barns. Photo by Len Villano.

Charles and Genevieve Richard were there that day, beaming as they stood in front of the barns. They said they always wanted to host a square dance in the big barn, but Frank Cowles worried that someone would light a cigarette and burn the barns down.

At the 150th celebration they finally got their wish when the barn’s huge doors slid open to reveal a caller giving instructions to a crowd of square dancers.

Genevieve was excited by the memory a year later. “We watched them dance, and even got one dance in ourselves,” she said. “I couldn’t believe it!”

The Richard don’t live on the farm anymore. He retired in 2002, and they moved up above the farm to a house not far away on Sunnyslope Road. Charles doesn’t drive anymore, so when they go to mass in the village, or to the grocery store, Genevieve is at the wheel. When they go home they don’t take the short route down Highway 42. Instead, Charles asks her to take Horseshoe Bay Road, past The Shallows, past the huge cornfields, and eventually, past the farm.

“We always have to drive by the farm,” she said, “and I have to drive slow so Chuck can take a look at it and see how it’s doing.”