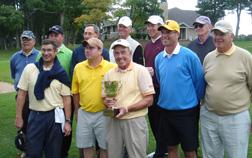 For the third year in a row, Horseshoe Bay Golf Club brought home the Door County Cup by defeating Maxwelton Braes in their annual Ryder Cup format tournament, held Saturday and Sunday, September 18 and 19. Twelve players from each course battled each other in four separate 9-hole formats over the two days.

On Saturday at Horseshoe Bay, Team Maxwelton Braes led the front nine of partner alternate shot 3.5 to 2.5, but slipped to 7.5 to 10.5 after nine holes of individual match play. On Sunday at Maxwelton Braes, Horseshoe Bay edged out Maxwelton in partner better ball, 3.5 to 2.5 on the front nine. A late surge by the home team in individual match play on the back nine (7 to 5) was not quite enough to catch the defending champs, who ended up winning by two points 19-17.