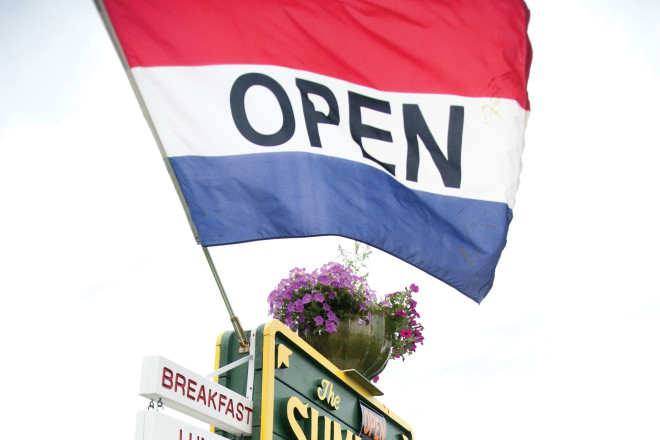 Soup and salad:  a deeply satisfying, heart-happy combination. Yet, like many classic things, it can be done to perfection reminiscent of Mom’s home cooking, or it can pale in comparison. 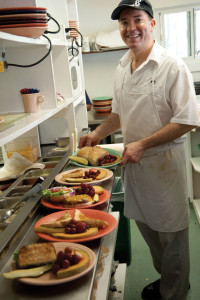 At the Summer Kitchen, located on the north end of Ephraim, owners and brothers Nino and Armando Jauregui make a mean cup of soup. In fact, soup is such a crucial part of their modus operandi that the little multi-colored soup cups decorate the pond just outside their screened-in porch.

Almost always steaming on the soup bar are delectable Spicy Tomato Dill, comforting Chicken Dumpling and fabulous French Cabbage. Two other soups rotate on a daily basis for a total of five.

“The good thing is just to enjoy the soup bar with every single entrée on our menu,” Nino Jauregui says. “We [get] good compliments on the soups – always, you know. Plus, we serve fruit instead of French fries most of the time.”

Nino says, “At lunchtime we always have the half sandwich, fresh fruit, cup of soup and dessert special. It’s an opportunity for the customers to taste a little bit of everything.”

Mushroom with Wild Rice, Chicken Tortilla and Chicken Cilantro all rotate through the soup bar. Irish Beef Vegetable makes an appearance quite often. Its perfectly cooked potatoes, cabbage and corned beef are the stuff of poetry – or perhaps a limerick.

The brothers make an effort to include Mexican style soups like Black Bean with Chorizo, according to Armando Jauregui. Fresh French bread also sits on the soup bar and should never be passed up, best when buttered and dipped. 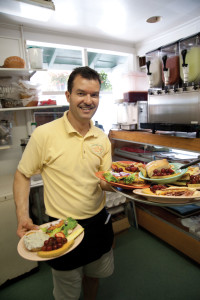 “I love the French Cabbage soup,” Michael Novotny, customer since 1975, says. “I usually have the Barker [because] I love BLTs. And I love the fact that they give you fruit with it. It’s pretty cool. It’s nutritious. Unlike other places where you get something fried.”

Novotny says, “My daughter comes here once every three or four years and Nino still remembers her, and her order. She doesn’t have to say a word. He says, ‘The usual?’ She nods, and he walks away. That’s the kind of service you get. When you [don’t] see a person for that long and they remember your order, that’s pretty special.”

Nino and Armando, originally from a small town in Mexico, are two of six brothers living in Door County, part of a family of 10. Their four brothers are in the roofing business, Chewy & Teo’s Roofing, but Armando and Nino have been in the restaurant business since they arrived in Door County from Southern California in 1994 and 1992, respectively.

The Jauregui brothers worked at the Summer Kitchen long before they owned it. For over 10 years, Nino worked as a waiter, while Armando cooked. In March of 2008, they had saved enough money to buy the restaurant.

Long-time customer Jeff Warner says, “We’ve been going to the Summer Kitchen for 12 or 15 years, and breakfast is a regular thing my nine-year-old and I do. Nino was a waiter when we started going, and now we always sit at the same table. It’s a running joke with [Nino] and my son – ‘We’ve known you since you were 6 months [old].’”

The Summer Kitchen offers an early bird breakfast with French toast, cherry pancakes, homemade granola, a large selection of omelets and blueberry oatmeal. There are also a few Mexican selections like huevos rancheros and egg burritos. 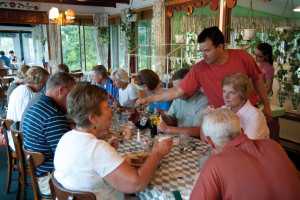 Warner says, “I get the quiche – I really like it and it comes with warm applesauce and fruit on the side. And I’m not a big quiche fan; I don’t usually order it anywhere else. But it’s really good. My son, he always has pancakes and bacon.”

After they bought the restaurant, they kept the original menu but added an entire section devoted to Mexican food for breakfast, lunch and dinner.

Armando says, “It was fun to make the change – adding authentic Mexican food to the menu. It’s stuff you don’t see up here. Sometimes, when people get here they don’t know we have Mexican food, but they’re excited and they’ll try it.”

And, it’s important to think about dessert ahead of time at the Summer Kitchen. They have an absolutely amazing selection of pies baked by Pam Brusky:  strawberry rhubarb, banana cream pie, peanut butter pie and coconut cream pie, just to name a few.

Novotny says, “They have wonderful pies. That lemon meringue…nothing will ever compare.”

In addition, they offer a killer bread pudding with a Door County cherry sauce and whole fresh cherries for a masterful mix of sweet and savory.

Their customers agree. The Summer Kitchen’s charm rises out of a mixture between the Jauregui brothers’ sense of humor, warmth and dedication to their clientele, and the high caliber of food served. They strive to gain the approval of every single customer and to always provide meals that are above average, excellent.

“They’re really nice guys. And the quality of the food – the fresh fruit as a garnish for breakfast and the high quality ingredients – I think that’s what sets it apart more than anything else,” Warner says

Whether you are looking for something sweet or savory, spicy or delicately flavorful, the Summer Kitchen’s wide range of menu choices leaves all the foodies satisfied, and no delicious crumb unturned.