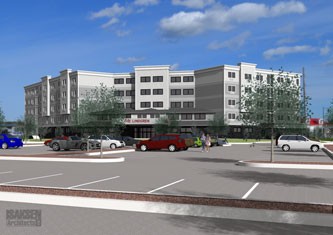 The front of the proposed five-story Lindgren Hotel.

At this month’s meeting, the Plan Commission held a public hearing regarding the hotel proposed for the northwestern foot of the Maple-Oregon Street Bridge in Sturgeon Bay. 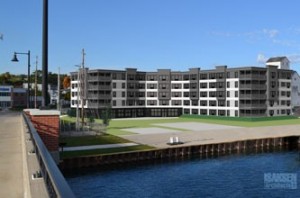 The rear, waterfront-side of the proposed hotel.

Bob Papke, owner of Pine Crest Assisted Living in Sturgeon Bay, is the developer of the hotel, and the architect is Henry Isaksen.

Papke and Isaksen described the project at the October meeting. Papke started out his presentation with a historic photo of his grandparents’ three-story, 54-room hotel, which at the time was the largest hotel in Sturgeon Bay and used to stand at the southern corner of 3rd and Louisiana, across from the Inn at Cedar Crossing.

Papke said he is looking at 85 to 90 rooms for this new hotel, depending on the final room layout. The hotel would include meeting rooms, a retail store for hotel guests and a spa that may be open to the public.

Isaksen said the five-story building would stand 61 feet tall and have a little less than an 18,000-square-foot footprint. In comparison, he mentioned that Bridgeport Resort is just less than 40,000 square feet and Stone Harbor is a little more than 65,000 square feet.

Although Isaksen said at that meeting that the concept is not to create a “big box,” with release of the architectural renderings, people have already begun expressing their dismay with the project, questioning both the look of and need for another hotel in the area.

“This is something very good for the city,” said Plan Commission chair Dan Wiegand.

Also speaking to the commission were Noreen and Robert Pollman, who plan to build Tugboat Sally’s, a 300-seat brewery and restaurant that would sit between the planned hotel and the existing Door County Maritime Museum. The Pollmans are owners of Shipwrecked Brew Pub, Door Peninsula Winery, Door County Distillery, Cooper’s Corner restaurant and Fat Louie’s Olive Oil.

“There are very few restaurants on the water. This is a terrific opportunity to put something on the water,” Noreen Pollman told the commission.

Unlike their Shipwrecked Brew Pub in Egg Harbor, which has a regular lineup of beers, Tugboat Sally’s would include six to eight constantly changing beers, and every seat offers a view of the water.

If approved, May 2016 is the targeted opening date for Tugboat Sally’s, the hotel and the city’s festival dock area.