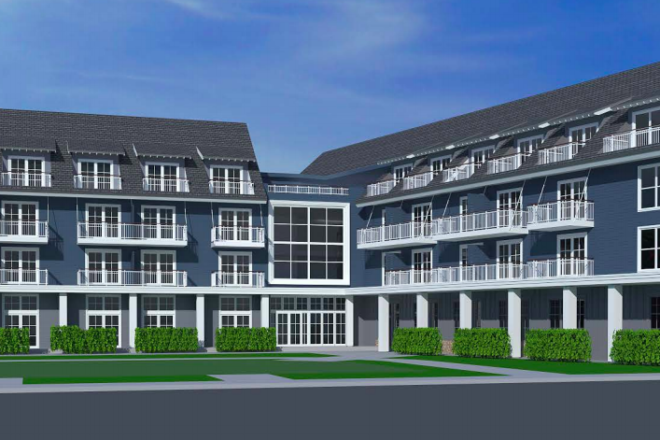 Developer Chris Schmeltz asked the Sister Bay Plan Commission to nix the requirement altogether to allow the addition of six first-floor units, saying it is getting more difficult to bring the project to fruition with the rising cost of construction.

“It’s getting tough, building costs are up 30 percent,” he said. With costs the way they are, Schmetlz said he can’t pursue the previously approved plan. “I can’t build it, there’s not enough income. That’s not your problem, these are just realities of where we’re at.”

A shortage of labor and tariffs on steel and Canadian lumber are all combining to drive up the cost of construction throughout the country.

Plan Commission chair Denise Bhirdo pointed out that the village has already made concessions allowing for four hotel rooms on the first floor in exchange for Schmeltz setting the south wing of the building back from the sidewalk.

Village code allows for a building to rise up to four stories and 45 feet, but only if the first floor is retail. Without retail on the first floor a developer can only build up to three stories.

Schmeltz said he has met with potential retailers throughout the peninsula and has been unable to get people to commit to the space.

Several plan commission and audience members suggested various retail options, but Schmeltz eventually conceded that he does not foresee any retail providing the revenue needed to make the project viable. He did say that he has confirmed retailers who are ready to go into the retail spaces that are part of phase two of the hotel development, which would be built separate from the hotel close to Bay Shore Drive.

“I do feel there’s retail opportunities throughout the village, but people are scared to be back in that corner below the hotel,” he said.

Greg Casperson spoke in support of changing the code to relax the retail requirement.

“I think the village is getting exactly what they wanted for the long-range plan,” he said. “You can’t break code, but you can manipulate it.”

Casperson’s property north of Al Johnson’s has been on the market for seven years. That property and the Hotel Dorr property have been the focal points of community development plans ever since the village embarked on its downtown redevelopment more than a decade ago.

Casperson said several developers have been interested in his property through the years, but they can’t make the numbers work by building small or incorporating so much retail space. He said later in the meeting that he does have a buyer interested in the property whose plans could be affected by any plan commission actions.