It’s a good thing the Feb. 3 Sturgeon Bay Common Council meeting was held in the truck bay of the city fire department because the air was so charged with electricity that spontaneous combustion did not seem out of the question.

But this and several other recent meetings were held there for space, not fire, concerns. And while there didn’t seem to be any firefighters in attendance, there were several city police officers keeping a watchful eye on the proceedings.

Sitting at tables arranged in a crescent shape similar to the one they sit at in the official council chambers, which can only accommodate 90 people, the council and city staff sat stone-faced while the truck bay filled up and throughout the entire hour-long meeting. They faced about 200 charged up people who had come for one specific reason, agenda item 11 – “City Plan Commission recommendation re:  Approve the Planned Unit Development for Sawyer Hotel Development, LLC subject to conditions.”

But all audience focus was on the proposed four-story hotel at the western side of the Oregon Street bridge, which now appears to be the key component of the city’s Westside Waterfront Redevelopment plan, especially since Robert and Noreen Pollman recently pulled their plans for a 300-seat brewpub from the project.

Despite the fact that a 50- to 60-room, four-story hotel from a “national lodging developer” was part of the Westside Waterfront Redevelopment project from the start, which would be the September 2011 West Waterfront Area Redevelopment Plan & Implementation Strategy prepared by Vandewalle & Associates, people seemed surprised to see a hotel in the plans when a rendering appeared in a Sturgeon Bay publication last November.

The proposed hotel has met with public disdain since it first came to light last fall, and, subsequently, City Hall has been under siege with a barrage of open records requests from people apparently hoping to uncover something that will derail the project. Various city officials have been accused of having money invested in the project, of being on the take, and even being Mob-connected.

Before arriving at the awaited agenda item, 30 minutes were set aside for the public to speak, with a maximum of three minutes each.

Steven Hellman of the Inn at Cedar Crossing was the first business owner to speak.

“Our current situation in hospitality is rather poor year-round, and lodging occupancy in the off season is extremely bad,” he said. He also pointed out that seasonal workers are already hard to find for existing businesses, and with a new 76-room hotel to contend with, “this would further exacerbate that problem” in an already competitive market.

If the hotel goes forward, Hellman predicted “an increase in failures of existing business. I think you’d also have to clearly look at the possibility of failure and abandonment of whatever new capacity is created.”

The biggest response from the crowd went to 13-year-old Frankie Pudlo, who said, “I have grown up in this city, spent my whole life here, sailing in the bay in the summer, iceboating in the winter with my father, who’s in the marine business. I’ve even rode my boat to school across the bay. The working waterfront and the tugboats are what make this place so cool. It’s a big part of what makes me proud to live here. I’ve been fortunate to travel to other places, and when I think of my own town, our town, I picture tugboats, bridges and all the activity in the marine industry. When I think of people visiting here, that is what they should see. It is what we have to offer that sets us apart from inland cities. We have boat builders, tugboats, the shipyards and the waterfront. Put up a big hotel on that spot and it will look like every other place, everywhere else, and it will ruin the best things Sturgeon Bay has. But before decisions are made and it is too late, let the people of our town make a choice and voice their opinion. It will most likely be good for everyone, we who live here, my generation who will want to stay here, and the people who come to visit our unique town, and what makes it so special.”

Scott Moore, who described himself as a homeowner on Pennsylvania Street for 30 years, used his three minutes to count hands for and against the hotel. He counted four hands for the project and 164 against. 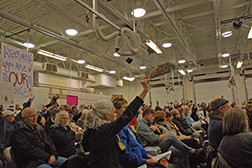 Moore was the 10th and final speaker before Community Development Director Marty Olejniczak took the floor to explain what was up before the council, which, he pointed out, was not approval of the hotel or sale of the land, but approval of a rezoning petition, changing it from Central Business District to Planned Unit Development (PUD), which allows for more flexibility in the zoning criteria. For example, the rezoning would allow the normal 45-foot height limit to be exceeded by parapets planned for the hotel, and it would also affect setbacks, which could be as little as five feet surrounding the hotel, which, he explained, would allow for more property in the proposed public park portion of the waterfront plan. He added there will have to be a second reading of the zoning change before it would go into effect, and there are other steps needed in addition to the zoning change, but if approved by the council at this meeting, it would “indicate support for the hotel project.”

Olejniczak also clarified a point for those who were worried about moving waterfront tugboats.

“The hotel by itself doesn’t relocate the tugboats,” he said. “I know a lot of people are concerned about that, as am I. It is true that relocated tugboats is under consideration and could potentially happen. But the fact that a hotel might get built on a portion of this waterfront site is not a vote against the tugboats. That is something that would still be looked at thoroughly by the Waterfront Redevelopment Authority and the council, and there are some options on the table to keep some or all of the tugs at this location.”

Alderman Dan Wiegand then took the floor. Wiegand also chairs the Plan Commission, which recommended approval of the rezoning, with some stipulations, such as the four-story building height not to exceed 45 feet, not including the parapets, and not to exceed 76 units, and that the hotel parking lot be open to other components of the waterfront redevelopment project.

Wiegand moved that the council approve the zoning change, and Alderman Stewart Fett seconded. Without further discussion, the board unanimously approved the measure.

“Turn your backs on them, they turned their backs on us,” said Christie Weber, a member of the group Smart Growth Sturgeon Bay that has grown up around the hotel issue.

A large portion of the crowd followed her direction, and there was a moment of silence.

A second public comment hearing on non-agenda items was held, but all 10 speakers returned to the hotel vote and associated issues. The final group of speakers included Laurel Brooks, who sits on the Plan Commission.

“I’m so ashamed of you,” she said. “I can’t believe that you sit there and look stone-faced out at this constituency and do the exact opposite of what everyone has pleaded with you to do. It isn’t even a matter of just rejecting the plan. You have been asked to wait, to listen to provide informational meetings, to have some kind of dialogue with your constituents and you smugly sit there and ignore everything. It’s so humiliating. I hope you feel that.”