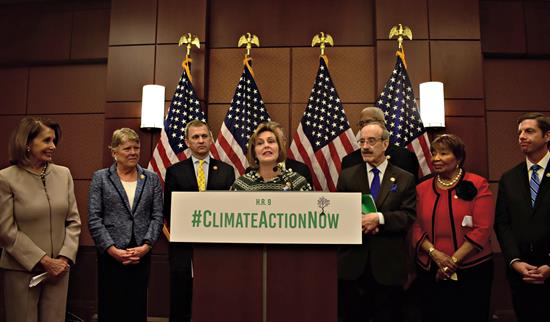 Rep. Kathy Castor (center) announces the May 2 passage of the Climate Action Now Act in the House of Representatives. Photo from castor.house.gov.

On May 2, the House of Representatives passed the first major climate legislation in nearly a decade. Voting mostly along party lines, the Climate Action Now Act requires the president to develop and update annually a plan for the United States to meet its nationally determined contribution under the Paris Agreement on climate change.

Specifically, the plan must describe steps to cut greenhouse gas emissions by 26 to 28 percent below 2005 levels by 2025 and confirm that other parties to the agreement with major economies are fulfilling their announced contributions.

The bill also prohibits federal funds from being used to withdraw from the agreement.

The act’s primary sponsor, Rep. Kathy Castor (D-Fla.), who chairs the U.S. House Select Committee on the Climate Crisis, was joined by 223 Democratic co-sponsors, which is five more than the number of votes needed for passage. The final vote of 231-190 included only three Republican yes votes: Vern Buchanan (Fla.), Brian Fitzpatrick (Penn.) and Elise Stefanik (N.Y.).

“Democrats said we would honor our commitment to act on the climate crisis,” Castor said in a press statement after the act’s passage. “Now we’re delivering. This is the first major piece of climate legislation to pass the House in 10 years, and it won’t be the last. The Paris Climate Agreement carbon pollution reduction goals are vital to the growing clean-energy economy and avoiding the worst impacts of climate change. Instead of cutting and running from this agreement as President Trump proposes, the House voted to honor our commitment. When America leads on cutting carbon pollution, the world follows, so this is a major signal to our allies that Americans overwhelmingly support this agreement. We deserve clean air, family-sustaining jobs in the growing clean-energy industry and policies that work for the people, not corporate polluters.”

Wisconsin’s Rep. Ron Kind issued the following statement upon passage: “Wisconsinites are blessed to live in one of the most beautiful places in our country. It’s up to us to ensure our environment is protected for generations to come. I am proud to support the Climate Action Now Act and reaffirm our national commitment to work with our global allies to combat climate change.”

Rep. Dan Kildee of Michigan, chief deputy whip of the House Democratic Caucus, applauded the passage of the Climate Action Now Act as a victory for the Great Lakes region.

Rep. Jeff Duncan of South Carolina, a member of the House Energy and Commerce Committee and co-chair of the House Energy Action Team, issued the following statement, which was typical of the Republican response to the act: “President Trump’s 2017 announcement of intent to withdraw the United States from the Paris Climate Accord was the right move for our country and part of the America-first agenda. Today’s misguided attempt by House Democrats to bind us to this flawed accord would have devastating consequences on our economy and put us at a disadvantage to our main competitors around the globe, while accomplishing no meaningful environmental reforms.

“The environment in the United States isn’t getting dramatically worse as those on the other side claim. We are increasing economic growth while simultaneously reducing emissions, a feat accomplished by free-market innovation and technological advances. We shouldn’t tie the hands of American innovators to an accord that puts other nations first and punishes the United States.”

The act is not expected to pass the Republican-controlled Senate, and Senate Majority Leader Mitch McConnell has already said the legislation “will go nowhere.”