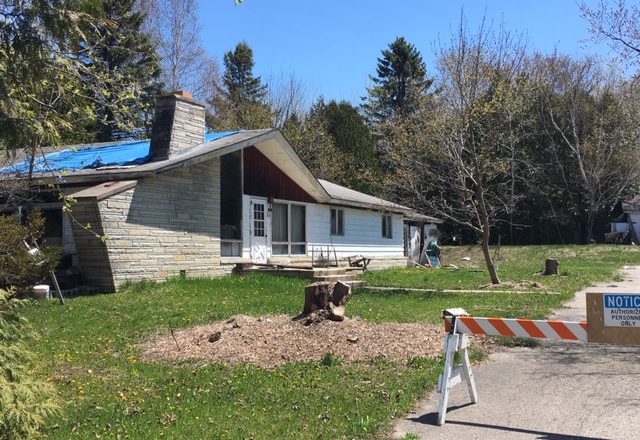 The Town of Liberty Grove is moving forward on several issues that have long been under discussion.

The Val-A Motel in Ellison Bay has been deteriorating for years, to the point of becoming a nuisance and a danger to the community, according to the town board. The town purchased the property in February, and in April, it was classified as blighted.

Car parts and oil drums were found on the property, so an environmental investigation was conducted to test the soil and groundwater. A second phase of testing for contamination is underway.

The property could be used to address the area’s workforce housing shortage. Door County Economic Development Corporation (DCEDC) is working with the town board to reach contractors who can do the work.

“Our thought was if the project in Ellison Bay works, that could be kind of a prototype,” Town Chair John Lowry said.

The project is in its early stages. The town decided against a controlled burn of the building for fire department training and instead is soliciting bids to raze the structure and clear the site.

“One of the reasons that we think it has potential for housing is because it’s walkable within the borough,” said Jim Schuessler, DCEDC executive director.

If the project works, the town board would consider looking at the acreage it owns behind the town hall that’s now leased out for farming as potential land for attainable-housing options.

DCEDC is identifying potential sites for housing in several Northern Door municipalities as well as Sturgeon Bay and working with various developers to devise the highest and best use of the parcel, Schuessler said.

The town is working with Door County Broadband (DCB) to consider placements for three towers to expand broadband internet coverage in the township, said Dave Studebaker, chair of the town’s technology committee. People don’t generally volunteer to host a tower on their property, and those who do are usually not in optimal locations, he said.

Liberty Grove has been underserved with wireless internet – something Lowry believes is a vital asset to a community’s health and future. The goals are to entice people to stay longer and to encourage businesses that can operate out of homes. The tech committee and DCB have been in talks about five potential locations, with the goal of installing three towers. Two locations, both on private property, have been identified as priority sites.

A town-owned location at Europe Lake was proposed in March. When the tech committee proposed this location to the town board, it was approved as a site to be considered, but there was an immediate backlash from the community. The Europe Lake location sits at the bottom of the list of five locations, Lowry said.

The towers are being paid for with a matching grant from the Public Service Commission. Studebaker estimated the grant coming in at a little less than $120,000, making the total project around $236,000. Liberty Grove is supplying 45 percent of the match; DCB is providing 45 percent; and $5,000 is coming from Northeast Wisconsin Technical College.

The grant was received in spring 2018, and it lasts for two years, making this a time-sensitive situation now that construction season is here, Studebaker said.

The Greater Escarpment Organization of Door County (GEO-DC) has been making progress since purchasing a building for its center in 2017. Volunteers finished much of the initial phase of work in February 2019.

Last spring, GEO-DC hoped to install two ADA-compliant bathrooms, but it ran into a wall with funding. Because the bathrooms are considered a capital improvement, the money had to be privately raised. GEO-DC succeeded in raising the money for both bathrooms this year, co-project manager Nancy Goss said.

Amber Beard, who joined the team in February, is working with three design companies to get estimates for the planned educational exhibits. GEO-DC will hold educational programs this summer, including lectures at the center (provided that construction wouldn’t interrupt them) and guided hikes. The goal is to have one lecture or activity and one hike per month.

Funding and construction on the building will continue until fall 2019. In the meantime, GEO-DC is working on installing educational signage at Porte des Morts Park by the stairway that was installed in 2018 next to the escarpment. Wisconsin Coastal Management awarded a grant for the project.

“I call it a living classroom,” Goss said.