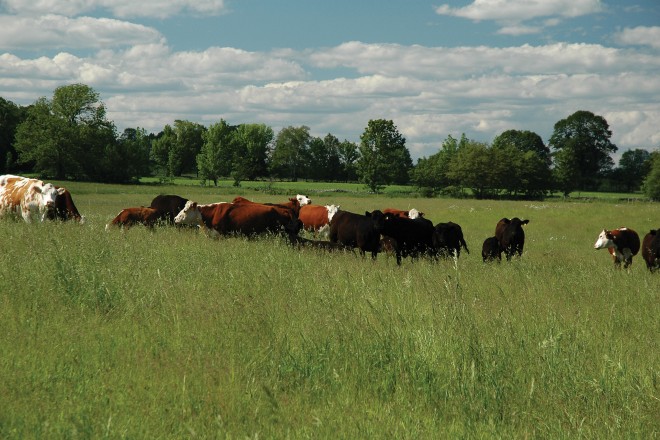 For more and more locals, raising their crops and herds in harmony with Mother Nature is becoming the method of choice. By following organic practices (particularly, eliminating the use of pesticides and genetically modified organisms – or GMOs) these farmers are kind to the environment while producing exceptionally flavorful and nutritious foods, and they’re doing it right in our own backyards.

Door County native Kevin Kiehnau grew up working on his family’s dairy farm in Jacksonport. In 1979, he began running the operation, all the while continuing to educate himself about better ways to work his land. It was after taking a course in sustainable agriculture that he really began to see things differently. He found that he could actually reduce costs – along with the use of pesticides – and ultimately be responsible to the environment. From there, he says, he just “fell into organic farming naturally.” Kiehnau has been MOSA (Midwest Organic Services Association) certified for twelve years, ten of which he spent producing milk for Organic Valley. Five years ago, he began raising an organic grass-fed beef herd.

Whereas traditionally raised cattle are grain-fed, farmers like Kiehnau prefer to let their herds peacefully graze on grass. He explains, “Cattle are usually given antibiotics because they cannot tolerate eating only grain. No antibiotics are given to organically raised beef cattle, and no chemical herbicides or insecticides are used when producing the crops that feed them. Grass-fed beef is just healthier all around. It has a sweeter, truer flavor. It also provides heart healthful Omega 3 fatty acids that grain-fed animals don’t, and it’s much leaner – containing about half the fat of grain-fed beef.”

A year ago, Kiehnau chose to sell his milking herd and no longer produces dairy, but he continues to subcontract for Organic Valley, acting as a consultant and educator. Other farmers considering the transition into more natural cultivation methods now look to him for information about basic practices, as well as assistance in “weeding out” the (often intimidating) paperwork involved with becoming certified.

Making the switch to organic methods has made Kiehnau a more knowledgeable farmer, and certainly a more passionate one. He asserts that he “would encourage any farmer to begin following organic practices – for the positive impact it has on the health of animals, people and the future of our environment,” and concludes, “There aren’t many people involved in agriculture who can truly look back at what they’ve done and say they’ve harmed no one. All of the chemicals that are now known to be harmful were once considered perfectly safe. Once you realize something is wrong with the way you’re doing things, it’s already too late – so much damage has already been done.”

Amy Stich, also a native of the peninsula, is another next-generation farmer serious about raising her crops without the use of damaging chemicals. Her farm has been family-owned since 1929, initially with a long run as a cherry orchard, then as a dairy operation. When Amy decided to take over, she knew she wanted to move into produce. Since the land she planned on planting had been pasture (and untouched by chemicals for 15 years), it was also a simple choice to keep it organic.

Today, Amy is successfully following her dream and selling her harvest through her on-site farm stand in addition to supplying various local restaurants, caterers and stores with her fresh and vital foods. And, as if her varieties of crisp lettuces, garlic, tomatoes, onions, leeks, blueberries, raspberries, winter and summer squash, pumpkins, beets, peppers, and eggplants aren’t enough, she also produces wholesome organic eggs, beef and maple syrup.

Is growing without chemicals a more difficult way to go? According to Stich, farm life is never easy, but doing things the natural way isn’t always more complicated. “I’ve been growing things since I was five years old, and I just don’t like the idea of using chemicals. I don’t believe in them mostly because they’re harmful – but also because I think they’re completely unnecessary.”

Though he wasn’t born into the farm life, Marc Savard says that working the land the way that he does is “a gut thing.” It’s true that he was initially looking for a big lifestyle change when he relocated from the Chicago suburbs to settle in on Wildwood Farm in Sister Bay, but he also knew that he’d always just had a knack for growing things. For ten years, he ran a CSA (Community Supported Agriculture) operation. “That’s how it all started. CSAs aren’t co-ops. They’re simply run by subscription, and offer a weekly variety of fresh produce to the community members who sign up. It’s like a one-stop shop for things as they’re ripening and ready.”

For Savard, the only part of organic farming that doesn’t seem quite “natural” is the mindset of people who continue to trudge through super-sized grocery stores in an effort to save time. “ I’m always amazed when people say they don’t like fruits and vegetables, because the truth is, they’re just eating bad ones!” Is it possible that a trip to your local organic farm is just as convenient? Probably. Is it different? Definitely. Knowing the person who produces your food – and how they produce it – is a sure way to become more connected and satisfied with the things you put into your mouth. Savard says buying from a local farm seems to be an adjustment for some folks, albeit a worthy one. “Mother Nature doesn’t work with anyone’s schedule, and she also tends not to budge. The harvest is ready when it’s ready, and different things are ready at different times. Nonetheless, it’s always worth the wait. It’s a shift in mindset that really pays off, and I hope our culture begins to see that.”

Notorious for her ambitious and impressive gourmet heirloom varieties of… well, just about everything, Linda Cockburn (another “transplant”) began working her small, active farm about 12 years ago. Though she admits her efforts began as a conscious means of putting food on her own table, her enthusiasm has left her with no choice but to share her harvest – previously as a vendor at area farmers markets, but now solely through her convenient roadside stand. There are always SunnyFunny eggs (beautifully mismatched dozens in all colors and sizes), an outrageous bounty of garlic beginning right around July 4th, and tomatoes that are as stunning to the eyes as they are to the taste buds.

In fact, all of the varieties that Cockburn grows – from herbs to eggplants to peppers – are chosen for flavor and visual appeal. “I love growing things that are suited to entertaining. Food should be interesting to eat, and to look at! I think that being truly rich is all about eating well.” Why organic? “It’s true food. It’s food that tastes the way you remember it tasting – before it became leached of its flavor and nutrients. But most importantly, every effort and every dollar spent on organic products is a vote for the sustainability of our world.”

Corner of the Past, Highway 57 & Country Lane,

And, a few restaurants where you’ll find organic Door County produce on the menu:

Buy locally –contact these farms for more information about their organic practices and products:﻿