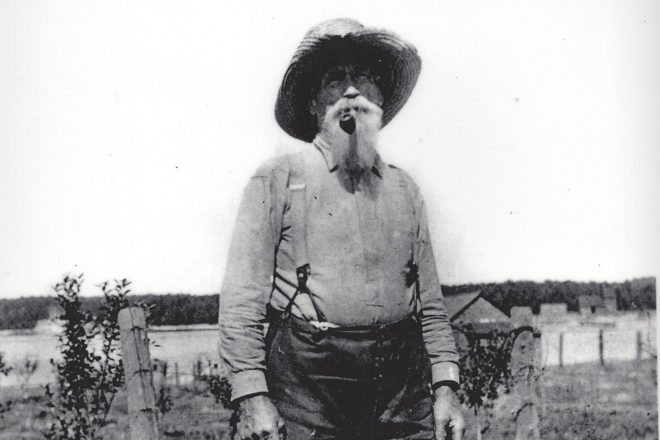 You can blame the name Ellison Bay on the government, or, to be more precise, the government land officer who got Johan Brendt Eliason’s name wrong when he filed a claim.

Eliason — recognized as the founder of Ellison Bay — was born in Denmark on Sept. 12, 1823. Or, maybe he was born in Sweden. His legal papers and obituary stated his birthplace as Denmark, yet several people who knew him, including a Swedish lady in Door County who said Eliason was from near her own birthplace in Sweden, claimed he was born in Sweden. Another indicator that he was Swedish came after his death at age 85 on Sept. 26, 1908, when two nephews from Sweden inherited his estate, which at the time amounted to 340 acres of land in the county. They were not as taken by Door County as was their uncle. After selling the land, they returned to Sweden.

A 1904 newspaper ran this item:  “Uncle John Eliason, who is now going on 82 years, continues in the usual good health and spirits, and he says he never felt better in all his days. Being now care-free he is in a position to enjoy his declining days in solid comfort. It is not at all likely, however, that we will venture on the intended trip back to his native Denmark, as it is hardly possible for him to bear up under the fatigues incident to a voyage of about 4,000 miles.”

Not much is known about the early, European part of Eliason’s life, before he immigrated to America at the age of 33, in June 1855, eventually arriving in Ephraim, where he bought a stony 40 acres of land.

Four years later, in 1859, he paid $6.11 for three tax delinquent lots of land in what was to become known as Ellison Bay. By 1870, Eliason owned 588 acres, and eventually is said to have owned as much as 8,000 acres of land throughout the county, much of that bought through tax delinquencies.

It is uncertain when Eliason made the move north to the area that would be named for him, but it must have been before 1865, for that is when government surveyors named Ellison Bay after him, in Anglicized form. However, Eliason was unaware that the area was named for him until he spotted the misspelled name on a government map several years later.

Eliason built himself a home that also served as a post office for he was the postmaster. He also built a commercial pier in order to ship timber for his lumber business. According to contemporary reports, Eliason was considered to be a wise and honest businessman.

A newspaper once printed his business card, which read:

So it appears Mr. Eliason not only accepted the misspelling of his name, but embraced it.

However, a year after his death, a newspaper reported that needed material for repairing the “John Eliason pier” was being accumulated.

And there was this item appearing from a local columnist shortly after Eliason’s death:  “The funeral of John Eliason was largely attended by the old settlers and others, as the deceased was one of the most popular men in the county. While his own worst enemy, his heart was always in the right place, as hundreds of the people who had business and social relations with him will testify. Peace to his ashes!”