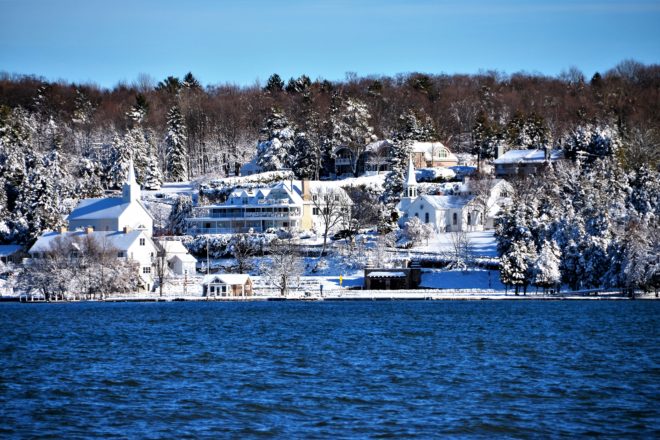 According to eminent Door County historian H.R. Holand, the story of how Ephraim came to be “is a narrative of unusual romance, of idealistic vision, and of sweet piety. The stern struggle of its evolution is kept in line by a historical unity and a high purpose.” Where the “unusual romance” enters this tale of unbridled determination in the face of failed dreams, however, is anyone’s guess.

Holand recounted the story of the founding of the village in his book Old Peninsula Days, in a chapter titled “Ephraim: A Venture in Communism.” He is referring to small-“c” communism rather than the big-“C” Marxist economic/political manifesto. In this case, it was a group of followers of the Moravian religion who banded together to build a community of people with a like-minded vision for its collective future.

The story begins with Norwegian-born Nils Otto Tank, who was born into a wealthy and politically connected family in 1800. While traveling in Europe as a young man, Tank found himself in the village of Herrnhut, Saxony, Germany: a community of people of the Moravian religion. Tank soon converted — to the displeasure of his family members, who disowned him. He married a Moravian woman, and together they traveled to Suriname in South America as missionaries of the Moravian faith. A year after their arrival, his wife, Mariane, died from a tropical fever.

Tank came to hate the plantation slave system at work in Suriname and elsewhere. He was suddenly on a mission to free the slaves — a mission not approved of by the plantation owners, other Moravian missionaries or church officials.

While in Holland with his young, motherless daughter, Tank learned he was not welcome back in Suriname. He remained in Holland, and in 1849, he became a wealthy man again when he married Caroline van der Meulen, the daughter of a wealthy clergyman who had just died. The Moravian church had a newfound interest in Tank.

Returning to Norway with his new wife, Tank learned of a letter from Norwegian Moravians in the American wilderness of Milwaukee who wanted help. The Milwaukee Moravians were looking for two things: help to leave the many temptations and pitfalls of the secular town of Milwaukee to go to the country to become farmers, and a Moravian pastor to lead the congregation.

They checked off the second item when Norwegian theology student Andreas M. Iverson was persuaded to tend the flock.

Tank arrived in Milwaukee in 1850 with a reported million-and-a-half in gold and the idea of creating a Moravian community similar to Herrnhut in Germany. He went on a six-week trek to look for land in the “interior of Wisconsin” and settled on almost 1,000 acres on the west bank of the Fox River near Fort Howard (soon to become Green Bay).

The community, which was named Ephraim, started to take shape during the fall of 1850, but by December of that year, homeowners started to wonder why they were not in possession of deeds to their land. In March 1851, Iverson confronted Tank and was loudly berated. That led to another meeting with Tank and an assemblage of the most respected members of the community. Tank let them have it, too, but he eventually agreed to have written contracts drawn up for each property within the week.

When a large group of settlers arrived at Tank’s house for the contracts, he loudly accused them of not appreciating his generosity and “left them as a madman.” That was the end of Ephraim in Green Bay.

Ephraim is a character in the Bible, the second son of Joseph, he of the coat of many colors. The name means “doubly fruitful.” You can see why religious pioneers would pick such a name for their new community, but why keep it for that community’s second site?

It was February 1853 when Rev. Iverson and two congregation members — Gabriel Wathne and Abraham Oneson — walked across the ice from Green Bay to Eagle Island, two miles off the Door peninsula’s shore. Sturgeon Bay resident Melchior Jacobs joined them.

“The Savior knows how fervently I prayed on that spot for the first time,” A.M. Iverson is quoted as saying in Paul and Frances Burton’s 1996 book Ephraim’s Founding Father: The Story of Reverend A.M. Iverson. “I received full assurance that right here our Atoner plant his little congregation and never forsake it in spite of all meager circumstance.”

Iverson was able to borrow $500 — to be repaid during a 10-year period — to purchase 425 acres of government land for his congregation of Moravians. Perhaps because of its religious background, Ephraim was the last dry community in Wisconsin until a referendum in the spring of 2016 allowed the sale of beer and wine.

But this description by Holand in 1917 still sums up the place: “The dance hall and its devotees have never found an opening in Ephraim. No saloon has ever poured out its foul stench, coarse jests and vulgar laughter upon this community. While the village and its people are far from perfect, it is a clean, sweet place to dwell in with high ideals and sterling honesty.”